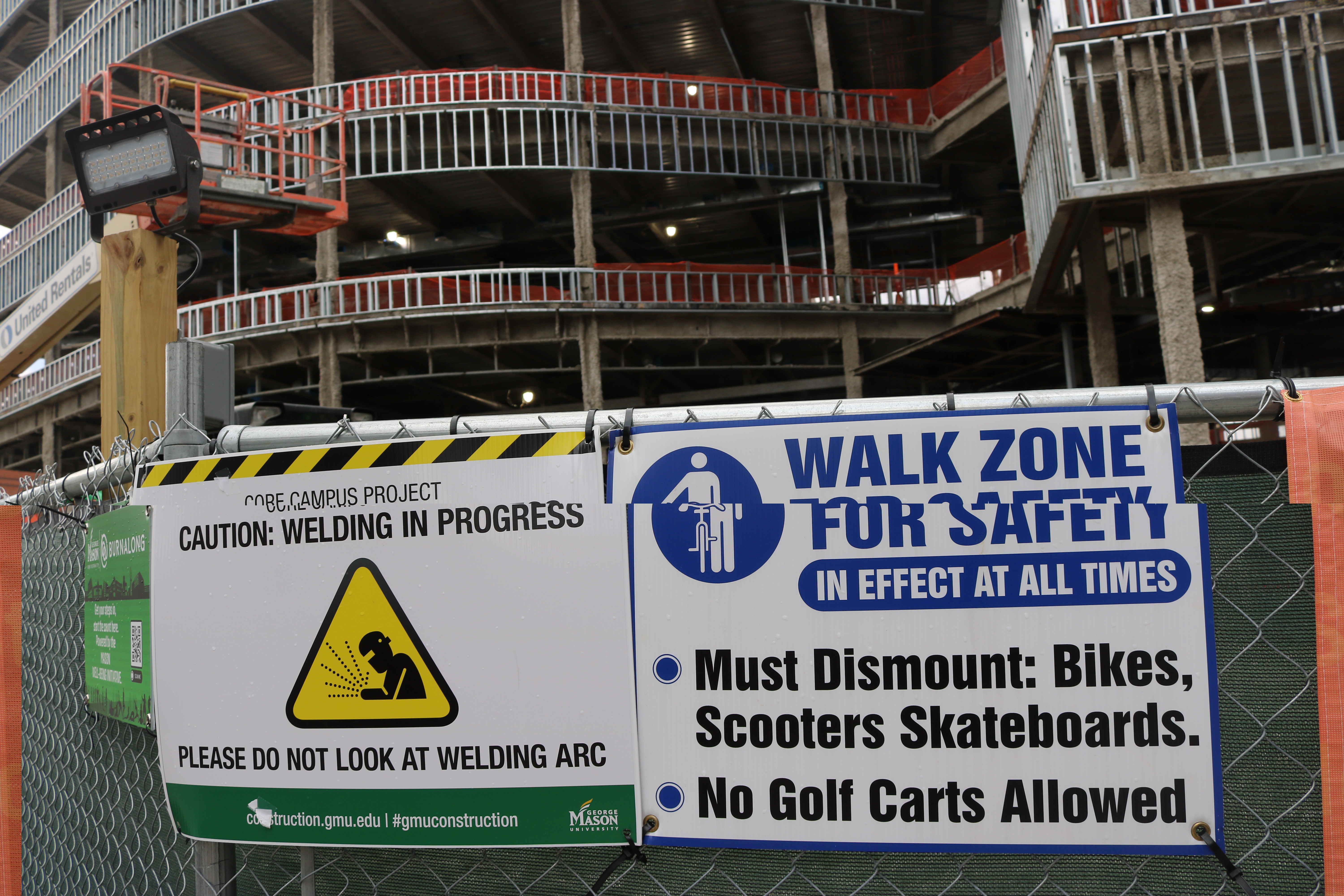 As students return to Mason after winter break, construction on and around the Core Campus Project continues.

Program Director of Facilities Cathy Wolfe-Pinskey explained that the Core Campus Project will fix issues pertaining to insufficient and older systems in both Robinson Halls.

“The demolition of the buildings and the construction of the new academic building will address these issues and provide a state-of-the-art learning environment for our students as well as additional meeting and green space,” Wolfe-Pinskey said.

New fencing blocks East Plaza — the sidewalk between Planetary Hall, David King Hall and the Johnson Center (JC) — as installation of erosion and sediment control measures and trench excavation occurs, according to the Core Campus Project: Weekly Planner website. Students can still travel the steps between the Hub and JC, but must follow a detour to make it to areas near the Nguyen Engineering Building.

“Over winter break significant progress was made on the utility infrastructure part of the project. The contractors worked 24/7 over large parts of the break because of the very low number of faculty, staff and students on campus,” Wolfe-Pinskey said.

She continued, “Progress was made on concrete placement, installation of spray-on fireproofing of the structure, interior mechanical, electrical and plumbing as well as site utility work. A mock-up of the building exterior was also completed which is now located at the northeast corner of the new building site.”

The FAQ section of the main construction website also states that the new academic building will have 27 classrooms.

However, it is unclear if there will be enough personal office space for full-time faculty. The committee from the Office of Space Management will have to decide which faculty have personal office space, according to Wolfe-Pinskey. “The university has a newly formed Space Administration Committee that typically makes decisions around how campus facilities are occupied,” she said. This committee will decide where to house office space, meaning that there could be professors whose offices remain in places such as the Northeast Modules.

On Friday, Jan. 24, an email was sent out detailing the movement of construction vehicles on campus, stating, “Construction vehicles will intermittently cross Wilkins Plaza between Aquia Creek Lane and the construction site entrance on the east side of the plaza starting January 27, and continuing through the spring semester and into the summer.”

“The safety of our students is always our top priority, and we have worked extensively with Campus ADA Coordinator Ruth Townsend, her staff and many others to ensure we are creating accessible pathways and re-routes as necessary,” Wolfe-Pinskey said. They have also met with Visually Impaired Patriots to ensure that measures are taken so that all students “can effectively navigate on campus.”

More information can be found at construction.gmu.edu.

The BOV Votes to Rename the Mason Global Center