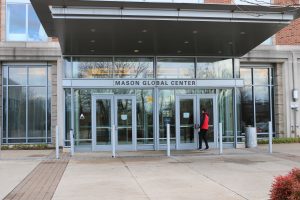 The Board of Visitors voted to rename the Mason Global Center to the Angel Cabrera Global Center, in honor of the university’s former President Angel Cabrera. The renaming went into effect Jan. 6. Provost David Wu supported this decision. According to Wu, Cabrera strongly believed in providing students with the ability to engage globally.

“The name change is important because it recognizes the president’s accomplishments in global engagement and study abroad,” Wu said.

During his seven years at Mason, Cabrera launched two global programs: Global Gateway and Global Discovery. The Global Gateway program allows freshmen students to choose one of eight locations to study abroad in their second semester of college. “Mason’s Global Discovery Program is an innovative university initiative that supports the development of intensive global experiences that are travel components of existing credit-bearing courses,” according to the Global Education Office website.

In addition, Cabrera launched Mason Korea, making Mason one of the few institutions to have a campus in Korea.

“Cabrera wanted students to have an understanding and appreciation of different cultures and ways of life,” Wu said.

Cabrera left Mason after the 2018-2019 school year and is now president of Georgia Tech.

Before Cabrera came to Mason, less than 1,000 students were enrolled in study abroad programs. That number doubled to 2,000 during the seven years of Cabrera’s presidency, according to Wu.

“Cabrera expanded the study abroad program to give students the opportunity to earn credits over winter break and spring break,” he said. “The number of students has doubled because Cabrera came up with a subsidy to reduce financial burden for students when it came to international travel.”

Cabrera created initiatives to impact global programs at Mason, and took on a leadership role in evolving the university community as a whole. In July 2018, Cabrera and United Nations Institute for Training and Research Executive Director Nikhil Seth signed a declaration to represent the United Nations’ support of the university’s commitment to global engagement.

According to Wu, the global center symbolizes all of Cabrera’s accomplishments.

“I feel that the name change is very appropriate in many ways because it is a good way to honor Cabrera’s legacy at Mason,” Wu said. “I have worked alongside him for many years and we would always be immediate in taking action when it came to expanding global programs.”

When asking students about their feelings toward the name change, some answered with positive responses.

“Honestly, it seems like a good idea as well as fitting, since he helped improve international opportunities for students who will find themselves taking advantage of them. That’s very nice,” Vanessa Gutierrez, a freshman majoring in policy and government, said.

“I like the idea of them changing the name to the Angel Cabrera Global Center, because Angel Cabrera did a lot for the international enrollment and study abroad participation by doubling it,” Hashimi wrote in a message to Fourth Estate. “Mason Korea was also established during Cabrera’s time as president of Mason. He had a great deal of contribution in the international enrollments and developments for [Mason].”

Other students did not feel that changing the name of the Mason Global Center reflects what most students think of Cabrera. “I don’t know that he’s well-liked around campus by students, so it just seems like kind of a political move rather than something that would add to the campus and honor someone that deserves it,” said senior Carolyn Mason.

“Honestly, I feel really offended and feel really disrespected that they would choose to do this. Cabrera left our university in such a state after spring semester with the hiring of Kavanaugh and also the renaming of the Antonin Scalia Law School, as well as bringing a bunch of conservative donors that don’t match … most of our student body,” junior Sarah Kurian said.

She continued, “I think it’s actually ridiculous that they would try and just permanently keep that name that brings a lot of re-traumatization to a lot of students on this campus.”

Mason’s official housing website has updated the name on the Angel Cabrera Global Center, but the building itself has not yet been updated on campus.