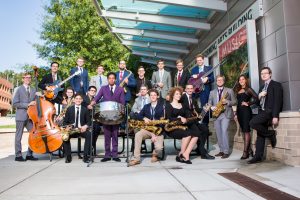 On Friday, Nov. 8, Mason jazz musicians performed their annual Jazz for Justice concert as a joint benefit for the Mason jazz program and Legal Services of Northern Virginia (LSNV),  a nonprofit organization with seven offices in the Northern Virginia area that offers free legal services to marginalized people.

Jazz for Justice was started by James Carroll, the founder of the jazz program at Mason, in 2001. Discussing the conception of the event, Carroll was inspired by Joseph Pelisi’s “The Artist as Citizen.”

“He talks about in there [the book] as musicians,” Carroll said. “We’ve got to be good citizens. We can no longer just hip-hop and play our horns. We’ve got to contribute to the community.”

After a chance meeting with former president of the Virginia State Bar Ed Weiner, the two men launched the annual program to raise money for both jazz music and pro bono work.

Jazz for Justice has evolved from a single benefit concert at Mason into a nonprofit organization. Franchises exist at several Virginia universities, including the University of Virginia, Christopher Newport University and James Madison University. 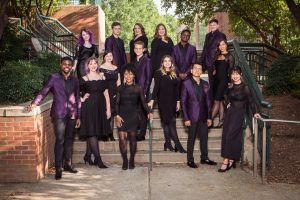 So far, the concerts have raised over $400,000, benefitting university jazz programs throughout Virginia. The money also helps to fund a variety of free services offered by LSNV.

“They do everything,” Carroll said. “[Elder] law, family law, human trafficking, housing law … They’re down in the trenches working with people that society doesn’t care too much about.”

“I think it brings two communities together,” she said. “It brings the jazz community and legal community together.”

In addition to helping cover operating costs for Mason’s jazz program, the money from this year’s benefit will help contribute to a Mason jazz trip in Sao Paulo next spring.

The 2019 Jazz for Justice concert celebrated the upcoming centennial of legendary 20th century saxophonist Charlie “Bird” Parker’s birth. Parker was a notable innovator, known for changing the direction of jazz music during the ‘40s and ‘50s before a tragic death at age 34.

He continued, “Bach and Bird are similar in their genius. Bach was gone 90 years before the general public knew who he was. Brahms discovered Bach. And now for Charlie Parker, the general public does not know who this colossal giant was.”

In addition to the music of Charlie Parker, the Mason Jazz Ensemble also debuted an original composition and arrangement by steel pannist Eljhaie Brathwaite at Jazz for Justice.

“Ever since I found out that he worked here, George Mason has been my choice,” he said. “It’s an amazing opportunity to play for something that’s very gives back to the community and I’m very honored to be a part of that experience.”

According to Purcell and Carroll, the program continues to grow. This year, there was a reception and jam session for younger musicians after the show, along with a host of Jazz for Justice memorabilia.

“Our relationship, now, with the legal community is really organic; it’s kind of like jazz music itself,” Carroll said.

He continued, “Ed Weiner and I, we’ve been friends now for 18 years. It started as a friendship of an attorney and a jazz musician, and we just are really playing with each other now. It’s grown into something like a New Orleans gumbo.”