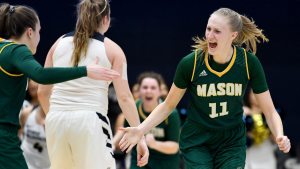 Women’s basketball is looking to continue the success of the last two seasons again this year.

Last year the team went 16-14, including 8-8 in conference play and finished seventh in the Atlantic 10.

“With the experience that we have returning from last season, we’re hoping to be able to carry over great leadership, the experience — both the good and the bad that we had happened to us last year. We’re hoping that we can, you know, just be a much more improved, experienced basketball team,” said head coach Nyla Milleson.

In addition to the return of all but two members of last season’s team, Mason has added five freshmen to the roster.

“They’re still freshmen right now,” said Milleson. “But I think they are really getting better and I think continuing to, to find places that we can build their confidence. And I think our returners are kind of finally at a place where they’re having confidence in them also. So just, you know, trying to squeeze the most minutes out of them and really, really build on their strengths.”

The team was picked to finish sixth in the Preseason Poll, their highest predicted finish since before joining the Atlantic 10 prior to the 2013-2014 season. However, both players and coaches know this does not mean much once the season starts.

“I think it gives us something to work towards so that we can prove that we’re worthy [of being ranked] sixth and above,” senior Jacy Bolton said.

“But we’re just trying to prove that to ourselves, we don’t prove it to anybody else,” junior Nicole Cardaño-Hillary added.

Neither player believed this added pressure, but rather another source of motivation.

“I think it definitely just motivates [me] and makes me want to work harder for my team and get my team a championship,” said Cardaño-Hillary.

Bolton added, “I want to work to be deserving of those awards continuously, every single day for my team and my coaches.”

Milleson expressed pride in her players but echoed their remarks, saying, “At the end of the day, it doesn’t mean anything. It matters where you finished, but it’s the highest we’ve ever been picked so I think that’s a compliment to the growth of our program.”

“But to have two players recognized in the preseason, we’ve never had that before either so I think that just shows where we’re going as a program,” she continued. “But [at] the end of the day, it doesn’t mean anything, so we’ve got to come out and we’ve got to play every day, every game and continue to really string good practices together.”

Women’s basketball opens their three-game homestand on Nov. 10 at 2 p.m. against Virginia Tech.

We Are Not the Good Guys (But We Can Be)