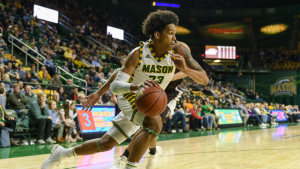 After a disappointing loss in the Atlantic 10 tournament quarterfinals, men’s basketball is looking to rebound in the 2019-2020 season.

However, this year the Patriots were picked to finish ninth in the A-10 Preseason Coach’s Poll compared to their fourth-place pick in 2018. This could be attributed to star Otis Livingston II’s departure after the 2018-2019 season and senior star Justin Kier’s injury to start the 2019 season.

Kier, who is currently injured with a stress fracture in his right foot, is looking to make a return in the early part of the season.

“Everybody’s roles [changed] this year with injuries and with newcomers, so [we’re] just [trying to] getting better every day,” Kier said.

He continued, “[Embracing] your role with the team, give energy, up our culture and obviously our goals are definitely to do good in conference and do good in nonconference, but overall, we just want to get better and better ourselves every single day.”

Kier’s absence has allowed players like junior Javon Greene to step up in his place. “I have to step up and for me, just learning from Otis, Jaire [Grayer] and Justin, all the older guys … taught me a lot so I’m just using what they taught me and applying it to my game,” Greene said

Sophomore Jordan Miller is looking to cement his role as a starter this season after entering the lineup in conference play due to injuries. While this ended his chance of potentially redshirting, it gave him valuable playing experience.

“I’m excited to play some of the A-10 teams, but I’m really just excited to actually play in nonconference this year. It’s a brand new world for me,” Miller said. 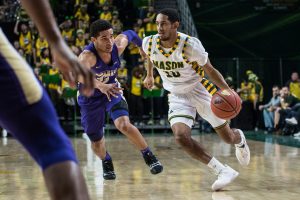 Head coach Dave Paulsen is also looking forward to the new season. “I know last year’s team early on got too caught up in expectations,” Paulsen said. “We want guys to emerge — every guy in our locker room has got a different role, a vastly different role, and with Justin’s absence, it’s even more so. It’s really a big, big adjustment.”

Paulsen continued, “So those guys [have] got to get used to playing much more leading roles as opposed to secondary roles. They’re capable, but when the light clicks, it’s gonna really click.”

“They got to get used to playing in front of the crowd and the band and different teams,” Paulsen said.

He continued, “Josh can really score the ball in the low post and is a really underrated rebounder. Bahaïde can really be an elite defender and attacker off the dribble. And Xavier, defensively, can really be a bulldog and really get us going in transition, so they only have different things that they can really do.”

Mason gets set for their home opener on Nov. 5 against Navy in an old CAA matchup.