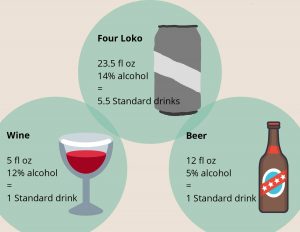 Dr. Matthew Rossheim, assistant professor at Mason, recently published two articles with a group of professors which take a critical look at the effect of new high alcohol by volume (ABV) beverages, such as Four Loko, on underage drinking habits.

Rossheim’s articles were published in the American Journal of Drug and Alcohol Abuse.

Original research cited in the first of the two journal articles found that undergraduate students in Florida, Virginia and Montana systematically underestimated the actual alcoholic content of Four Loko, although in Montana this underestimation was much lower than it was in Florida and Virginia.

Rossheim stated this underestimation was exacerbated because “when the ABV was capped in other states or when they released higher ABV versions, instead of changing the amount of servings per container, they just changed the amount of alcohol per serving so [the labeling] no longer reflects the standard alcoholic drinks.”

Another article published on Aug. 23 in The American Journal of Drug and Alcohol Abuse, titled “Underage drinkers’ first experience consuming a popular brand of supersized alcopop,” also found that undergraduate students in Florida and Virginia “had twice the odds of blacking out after drinking Four Loko for the first time” than they did in Montana.

Rossheim said that this was probably because “Montana has a cap on the alcohol limit of beer so these products can only contain up to 8 percent ABV while in Florida and Virginia they can have up to 14 percent ABV.”

The second journal article published on Oct. 9 titled “The Federal Trade Commission’s mandated Four Loko labeling fails to facilitate accurate estimation of alcohol content by college students” found that: “In states where Four Loko was available with 12 percent to 14 percent ABV, students had twice the odds of blacking out after drinking Four Loko for the first time.”

The study also noted that “students are far less likely to underestimate alcohol content for 8 percent ABV cans compared to cans with higher concentrations of alcohol.”

“It’s marketed towards young people, and it makes large quantities of sugar-sweetened alcohol readily available to them. It looks like an energy drink, you can transport two cans of it very easily, and two cans of it can be a lethal dose for young people,” said Rossheim.

Professors from the studies, including Rossheim, concluded in the Aug. 23 study that “policies restricting supersized alcopops’ ABV may help consumers better estimate and understand their alcohol content.”

Washington, D.C. Can Do Something Right