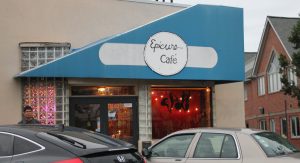 On Saturday, Oct. 5, from 7 p.m. to 11 p.m., students and alumni from Professor Shawn Purcell’s studio gathered at Epicure Cafe in Fairfax to perform for family members, jazz enthusiasts and Mason students.

The room was filled with the smell of freshly made food, and the dangling Christmas lights created a sense of being under the stars.

Junior James Weiss, a music major, began the show. He began his set with “Autumn Leaves” by composer Joseph Kosma. “We are on our way into autumn, so I thought it was appropriate,” he said.

Weiss finished his set with “Birks’ Works” by Dizzy Gillespie.

His favorite part of events like these is “just hearing the others get to play.” This is the first time some of the performers have played as a group.

The next student to perform was junior Darwing Delacruz, a guitarist studying music education at Mason. He started his set playing “Fly Me to the Moon” by Frank Sinatra. The rendition was very well done and fit the romantic setting very well.

Sophomore music major Jackson Hollaway came up after Delacruz. He started off with the song “Misty,” made popular by artists like Johnny Mathis, Frank Sinatra and Ella Fitzgerald. Just like Weiss, he enjoyed getting to hear others play their songs.

Purcell, the professor behind these students and alumni, also played along during each song, adding his own personality to the music. Throughout the night, the musicians played with great chemistry.

The group only meets once a week, and this was their first time performing together. They hope to continue this event every semester. In the future, Purcell wants to base some of the other events on different jazz themes.