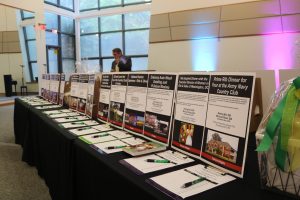 During Luke Ratcliffe’s childhood, he began teaching himself music on a small upright piano his family owned. His parents wanted him and his two younger brothers to each take a year of piano, but it only stuck for him. He said his desire to play music was almost a calling.

Years later, Ratcliffe is a highly successful pianist. He is currently preparing for the Sydney International Piano Competition, one of the most prestigious competitions in the world. He is also planning to perform next semester with a few local orchestras. With all of these achievements, maybe it should be no surprise to learn that he has an ARTS by George! scholarship, an award supported by one of the largest events within the arts community at Mason.

ARTS by George! was held Saturday, Sept. 28, in and outside of the de Laski Performing Arts Building. All seven main programs and schools in the CVPA, as well as the Mason Community Arts Academy and Green Machine, presented student performances that highlighted each of their particular specializations. Towards the end of the evening, Audra McDonald, a six-time Tony winner and this year’s guest artist, performed in the Center for the Arts.

ARTS by George! raises about $300,000 each year, with approximately half of the amount going towards student scholarships. In 2018, Graziano stated the event raised $259,000 and gave $141,000 in scholarships. Sponsors of this year’s event include former university president Ángel Cabrera, and Carolyn and Milt Peterson, who gave 8 million dollars to build Peterson Hall.

Graziano said the main mark she has left on the event has been to lower its costs while increasing profits without affecting the performances in any way. General tickets for this year’s event started at $300, with Mason alumni tickets beginning at $125 and sponsorships at $1,800.

For the students who are awarded a scholarship from ARTS by George!, every little bit helps. The scholarship amounts and recipients are determined by faculty members. Donors can specify what program they want their funds to go towards, after which Graziano and her team figure out exactly how much money each unit has to spend and disperses it to them.

Sophomore theater major Hasan Crawford is also an ARTS by George! scholarship recipient. He has known since his first role in the seventh grade that theater is something he could pursue forever. Crawford was cast as the lead in his middle school’s musical, after his theater teacher recommended he audition for it. He hasn’t looked back since.

From age 15, Crawford worked as often as he could in order to save up money to attend college. He pays for his tuition himself, out of pocket. His family helps to support any other costs, like books and course fees. Crawford has only attended Mason for the past two years, and what he’s learned since arriving has already benefited him.

“Just being able to study here and getting my skills up has helped with getting jobs,” Crawford said. “This year, I’m starting to audition for shows that pay so that I can start helping, using that money to go towards paying for my education.”

College is heavily important to Crawford’s family. His grandfather stressed the importance of education to him. One of his ancestors was illiterate, and lost land that the family had owned after slavery ended when he signed a contract that he couldn’t read.

“My culture as an African-American, I’d say it’s a pretty big part in almost everything I do, especially theater,” Crawford said. “Having that history and being able to implement that history in the work that I do has been just so fulfilling to me. It’s just been great to sort of share my culture with other people through the art form that I love most.”

Ratcliffe does not have student debt, even though he’s a senior pursuing an accelerated master’s. He transferred from The Juilliard School to Mason’s school of music last fall. In-state tuition at Mason combined with room and board for the 2019–2020 academic year is only $24,510, while Juilliard charges $67,948 for a continuing student living on campus in a double room during the 2019–2020 academic year. Juilliard also warns students the “costs of living in New York City are high and off-campus rents can be exceedingly high” on its tuition, fees and expenses page.

Ratcliffe was putting himself through school with the financial aid he received each year, which is only around a third of the total tuition.

Then, at the start of his junior year, Ratcliffe’s mother was diagnosed with breast cancer for the second time. He found himself taking a bus back every weekend to go home and help. He later took the next semester off from school, and came back to the NOVA area to live at home while working for his chiropractor father as a physical therapist’s assistant until he enrolled at Mason. Since, he has continued his education, and his mother has fully recovered from her cancer.

“I don’t think I would have been able to stay literally living in New York because it was just too expensive,” Ratcliffe said. “So, that contributes to the freedom that I feel now. There’s no debt, I’m not in debt, and I’m making money as well, to fund projects and to do things instead of working to pay back [student loans].”

Ratcliffe has performed in ARTS by George! in the past, while Crawford has not either year.

Many other students performed in the showcases, highlighting piano celebrations, the student opera and winter guard. These artists showed their specific skills, in the process becoming the highlight of the evening.