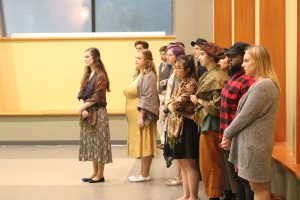 On the evening of Saturday, Sept. 28, in multiple showcases at the de Laski Performing Arts Center, students from across the College of Visual and Performing Arts demonstrated to ARTS by George! attendees the artistic talent that Mason has to offer.

Described as a grand night for singing, the opera portion of ARTS by George! featured an excerpt from the Opera Studies 2019 winter show called “Mesdames de La Halle.” The story takes place in Paris’ famous fruit and vegetable market, where a love story unfolds among its vendors.

The group of students imitated the bustling market, each enticing the audience with their products. Later, the lovebirds in the show sing a duet together and profess their love.

In the contemporary music world, the art of opera is sometimes considered a dying practice. However, the Mason students who study and practice it are sure it will survive for years to come.

“Opera can move mountains,” said Rosalind Chan, one of the performers. “It can be political, it can say a lot.”

Jaelin Mitchell also plays a role in the opera. ARTS by George! has given the freshman an opportunity to maintain this classic art.

“Opera can live for many years, and I have the opportunity to sing,” Mitchell said. “Anything that has lasted as long as opera has [spoken] for itself.”

The students played around with their expressions, and made sure that their mannerisms aligned with their musical content.

“Opera does change, but it stays within its roots too,” Chan said. “[We] as artists grow with it.”

The students will perform the entire show on Dec. 6 and 7 at the Hylton Performing Arts Center on Mason’s Science and Technology campus.

Simultaneously, as guests dined next to the Mason statue, they had the opportunity to watch Mason’s world-class Winterguard perform.

They first performed a dance choreography piece to an instrumental before moving on to flags and rifle spinning. Though it was a small group, they held the audience’s attention with their captivating flag moves and tall rifle spins.

Mason’s Winterguard is a lesser-known organization on campus, despite being one of the few that performs at a world-class level.

“[ARTS by George!] is a really big opportunity because not a lot [of] people know about [colorguard],” Ellery Broga said. “It’s harder to explain without showing them exactly what it is.”

Since the group is world-class, auditions and practice can be very challenging. However, the students still find ways to stay inspired.

“What’s really great about our group, and what really inspired me when I auditioned, it’s not that no one has the talent, it’s that you have to have the right attitude,” DaSean Young said.

Many times, money can be a barrier for those looking to join.

“It’s a really big struggle because there are so many people that do have the talent, but if they don’t have the money, they can’t do it,” Rouga said.

The Mason students are passionate and work together to create a world-class level show every year. The group will soon start their intensive weekend rehearsals in preparation for their winter shows and competition.

Dance, one of Mason’s most championed programs and well-known for its accomplished alumni, was also showcased at the event. The showcase, titled “The Show Must Go On,” revisited one of the school’s pieces performed at last semester’s gala. Since then, a few of the students have graduated, and their former understudies stepped in. 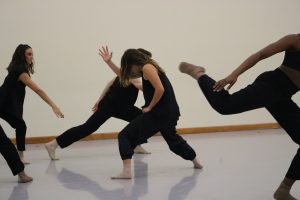 The showcase piece, “Kosmos,” is an electric performance with various moving parts and difficult routines. The complexity challenges the notion that dancers aren’t intelligent and don’t really think when it comes to their movements.

“The stereotype that dancers aren’t smart is what we’re trying to break,” said senior Madeleine Burr.

“Kosmos” necessitates that the dancers are always thinking and aware of their surroundings, even when they aren’t moving.

“[We want] to show that we aren’t just bodies moving, we’re also thinking,” said senior Maya Fedorenko. “Even the people who aren’t in the piece at the time have to know what’s going on at all times, every part really, because anything can happen on stage.”

During the performances, there were a few other showcases that highlighted the work of students and alumni.

One such showcase was that of augmented and virtual reality presented by the game design program. A group of students on campus designed an augmented reality game that is meant to teach U.S. combat medics emergency surgery procedures.

Another group, the Mason Community Arts Academy, offers lessons on many art disciplines to the greater community. Their group was highlighted at the event along with Sarah Dolan, who showcased “Print Production with Navigation Press.” Dolan is a Mason alumnus currently teaching a course at American University focused on printmaking.

Mural Brigade, the group responsible for the murals on the Skyline windows and the Arts and Design building, were also present at the event.

“We basically try to spread more art around campus,” sophomore Jendaya Williamson said. “We want to bring more life to Mason, and not have so much land or office feeling to it.”

The night was one for the Mason arts community to remember. The proceeds from the event will go towards funding for art scholarships in the seven art-related Mason schools, along with the Mason Community Arts Academy and Green Machine.

Editor’s Note: An earlier version of this article spelled incorrectly the title of the dance piece. The correct spelling is “Kosmos,” not “Cosmos.”

Scholarships Sparkle At ARTS By George!