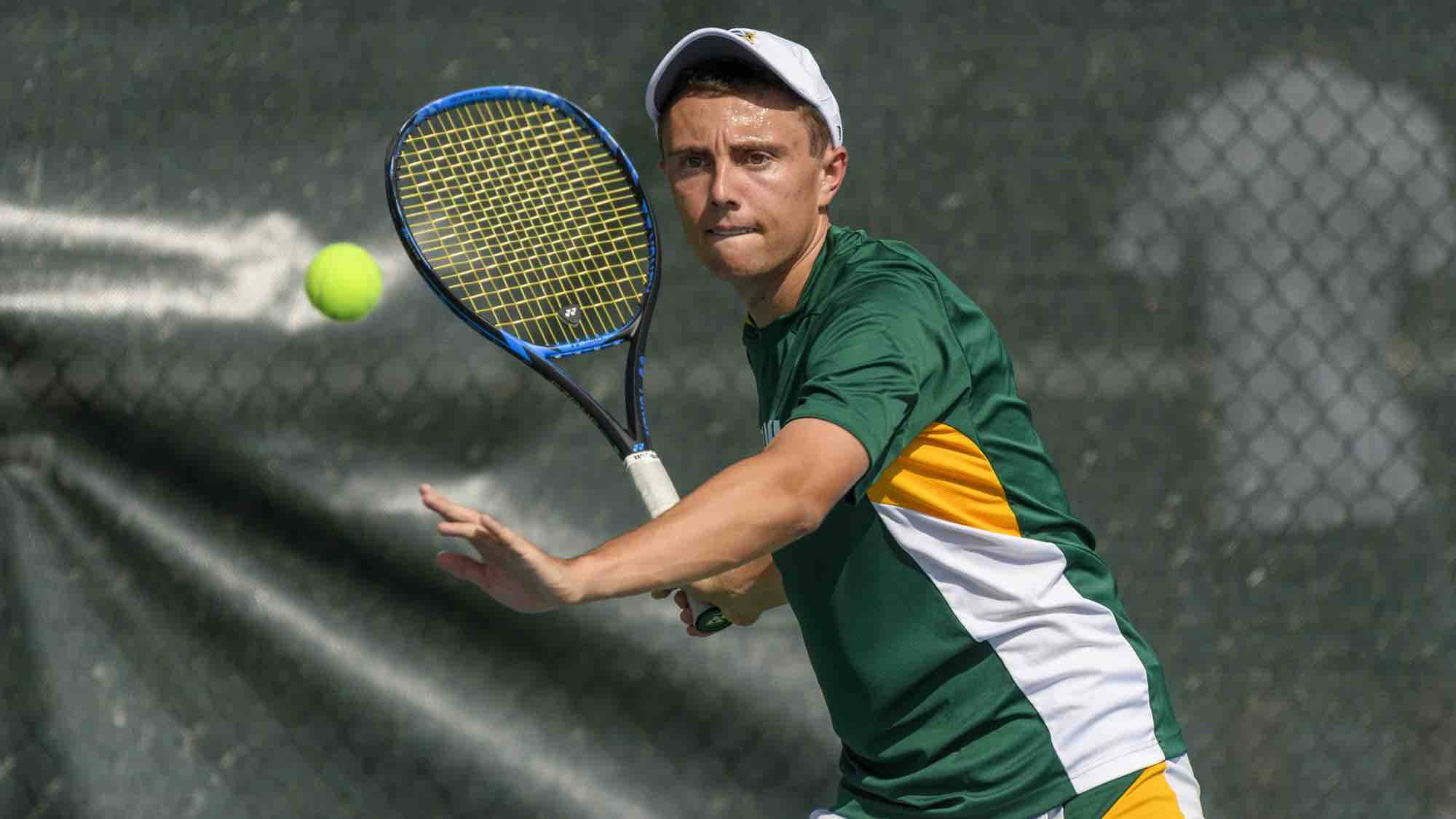 Ayers was born merely 20 miles away from Fairfax, in Bethesda, but spent a lot of his childhood moving around due to his parents’ military obligations.

In high school, Ayers found a home in San Antonio and at Ronald Reagan High School.

After graduating with honors, and as the 2014-2015 San Antonio Express-News Boys Player of the Year, it was once again time to find a new home.

“Choosing a university or college was difficult for me,” Ayers said. “I wanted to know everything about each school.”

One of the most significant factors in Ayers’ decision was based on one of Mason’s premiere selling points: location.

“My major is economics. One of the reasons I came here is because I really wanted to use that to get into politics.”

Although his interest in politics has faded in the years since he arrived at Mason, Ayers’ tennis game is as strong as ever.

In his career at Mason, Ayers has a 55-33 record in singles matches, including a career-high 21 wins during his freshman season.

He also shined on the doubles court in his freshman year, going 11-7 overall and 5-1 in Atlantic 10 play.

Ayers was met with stiffer competition in his sophomore year, but he played well despite the increase in difficulty.

His signature win that year came at the ITA Regional Championship in October 2017. He defeated the No. 15 seed, Matthew Lord from the University of Virginia, and reached the Round of 32.

For his efforts during his sophomore season, he was named to the All-Atlantic 10 Second Team.

Despite the impressive accomplishments in his first two years, Ayers reached new heights in his junior year.

Three weeks ago, Ayers was named the Atlantic 10 Player of the Week for the first time in his career.

Speaking about that honor, Ayers remained humble, saying, “It’s great and all, but I enjoy being on this team. When you’re out there by yourself, you do focus on yourself. But then I just try to get back to the team atmosphere, because I’m playing for the team.”

One of the biggest wins of his collegiate career occurred Saturday, April 6, against Dayton’s Jordan Benjamin, the reigning A-10 Player of the Year.

In that series against Dayton, the No. 4-ranked team in the A-10, Ayers scored the clinching point to put Mason over the top, 4-3.

“I think that was the first time I ever clinched a match,” Ayers said, reflecting on the victory. “[Benjamin] is a really good player, so it was definitely a challenge. But I just enjoyed it, because I knew I had my teammates behind me. I knew, win or lose, they would support me.”

Ayers and the rest of his teammates embrace a team-first approach to the game. He said, “We don’t care if we win or if we lose. As long as we’re there for each other as a team, that’s all that matters. That’s how it’s been all season.”

Aside from his teammates, Ayers finds inspiration from two professional players.

“[Growing up,] I was an avid tennis follower,” Ayers said. “One of my idols has always been Novak Djokovic. Both men and women that I’ve followed a lot [have] inspired me, but he’s probably been the most inspiring.” 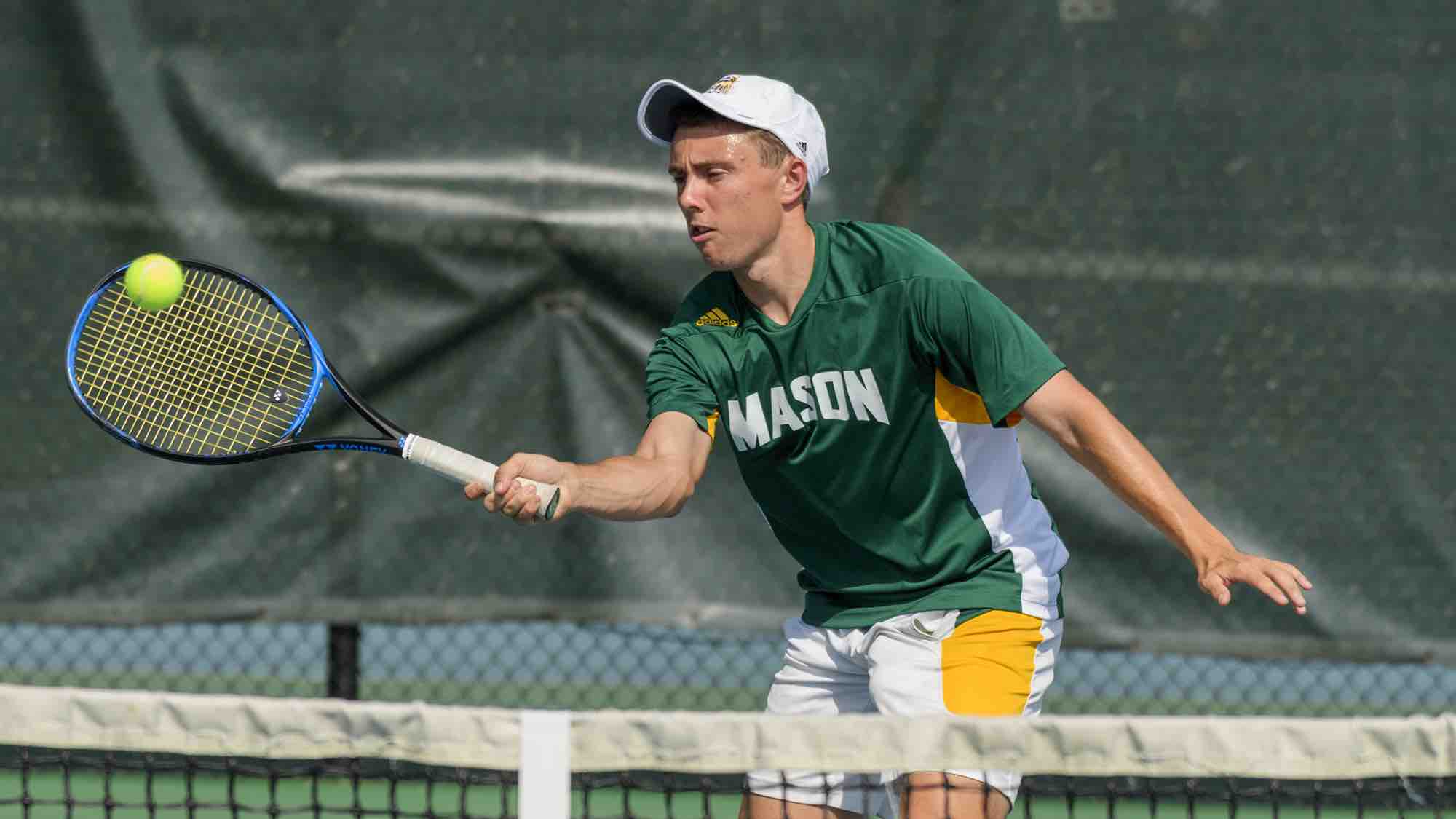 On the women’s side, Ayers looks up to another tennis superstar: Angelique Kerber.

Ayers mentioned how their game styles are similar and that he likes how she plays the game.

When looking for a source of inspiration, one cannot go wrong with two players who have each won the Australian Open, the U.S. Open and Wimbledon.

One area in which Ayers has found lots of success, unlike his two idols, is in the doubles game.

This season, Ayers reached a career-high of 12 doubles wins, 10 of them with his primary doubles partner, junior Jakob Nielsen.

So far at Mason, Ayers has racked up 31 wins in doubles.

Both singles and doubles matches play a role in deciding the A-10 tennis championship.

This season, Ayers led his team to the No. 6 seed in the A-10 Men’s Tennis Championship, which took place last week in Orlando, Florida.

Ayers won his doubles match with his partner, graduate student Giuliano Buzoianu. He was up one set in his singles match, which did not finish, due to La Salle clinching the series while his match was in progress.

With the 2019 season officially over, Ayers is preparing to enter his final year with the program.

Aside from his and his team’s ultimate goal, winning the championship, Ayers said the thing he most wants to do next year is simply to relish the moment.

“I just want to enjoy every moment that I’m on the court or with my teammates or in the classroom,” he said. “I’m really appreciative of the opportunity. That’s what matters to me, just to appreciate it and enjoy it.”