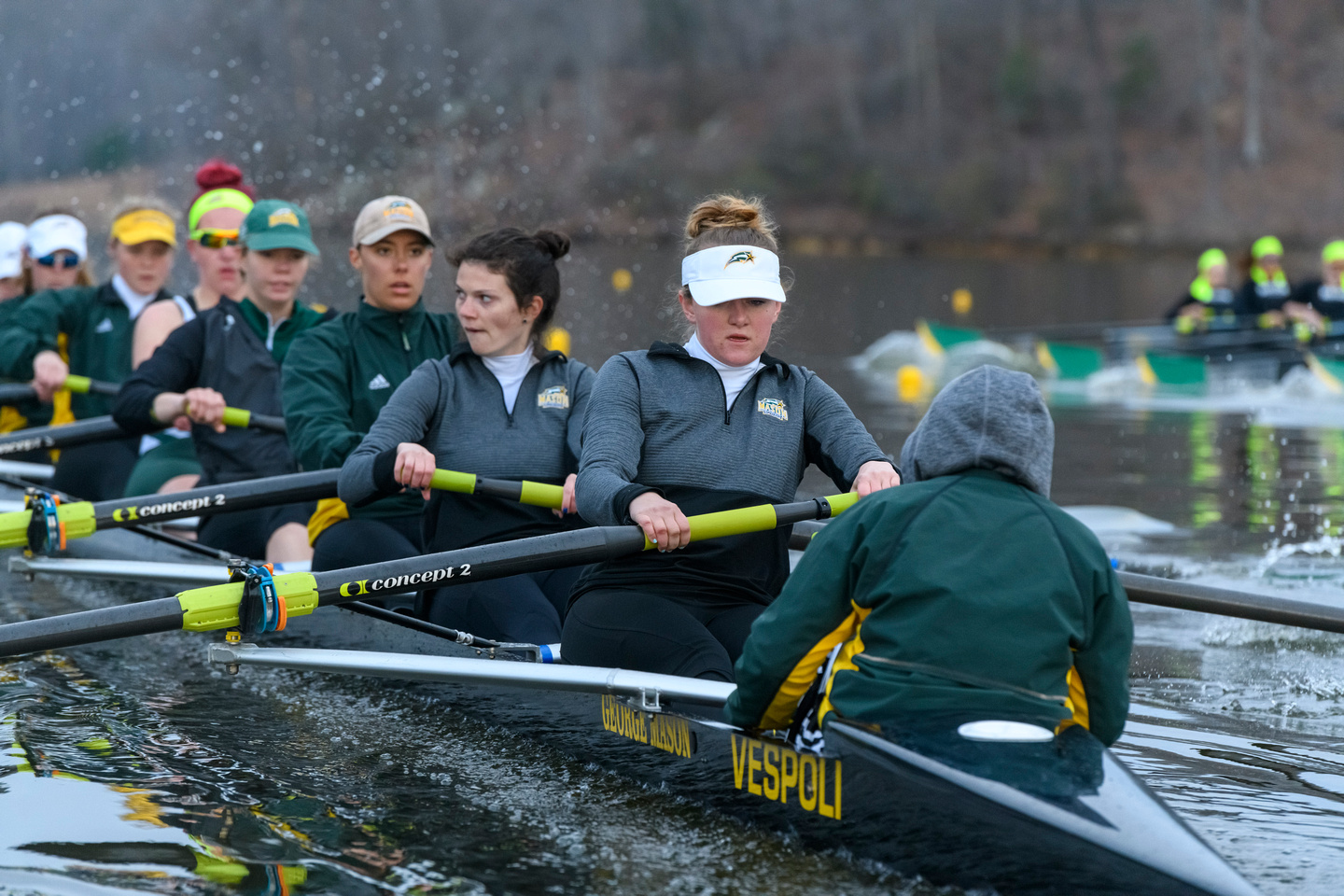 Walking on in your first year of Division I (D-I) sports would usually come with reduced playing time. However, for Mason Rowing’s Elizabeth Johnson, it was quite the opposite.

Starting as a novice, someone who has never rowed before, Johnson had to transition from her background of playing soccer. “I played soccer for basically my entire life,” she said.

According to Johnson, transitioning to rowing was actually easier coming from a soccer background. “People always say that rowing is like ‘Oh, you must have great upper body strength,’ and it is, but it’s mostly [leg work] so soccer definitely helped,” she said.

However, the way in which Johnson became involved with the sport she loves is probably not the most common among D-I student-athletes.

“I guess it was a personal decision. I got a postcard in the mail before I started and I was like, ‘This kinda sounds interesting, wouldn’t it be fun if I joined the rowing team?,’” she said.

Even though she had not experienced rowing in the past, as a walk-on, Johnson knew that she wanted to stick to rowing from the first time she practiced with the team.

“[It] was the first couple of on-the-water practices. Just being on the Occoquan, it’s indescribable, being away from campus and there’s no buildings anywhere, it’s all water and the trees and everything,” she said.

As a novice, Johnson started her journey in Varsity 4B boat at the Frostbite Regatta in 2016.

“[My] first regatta was a time. It was really exciting being there with all the teams. It’s very different from anything that you could do in high school. It’s very competitive and I’m a competitive person, so it fuels my competitive side. But the first regatta was really great because we had been working so hard and then we finally got to the point where we got to our first race and we were like, ‘This is our first race, so we can actually prove we’re rowers now.’ It was just really awesome,” she said.

It might not have been their best finish, as they finished second in their heat for the 2000-meter race and came in eighth overall in the event with a time of 8 minutes and 59 seconds.

While this result may deter some, especially for the first race of their career, it only pushed Johnson to work even harder while also balancing the other parts of her life.

Now, as a junior, Johnson handles a full course load, her responsibilities as a D-I athlete, and on top of everything volunteers with the Smithsonian Natural History Museum in Washington, D.C.

As Johnson has gained experience on the water, she has climbed the ranks to now sit in the Varsity 8+ boat, the main competitor for the university in races and regattas. Furthermore, in addition to pushing herself to do better, she also helps the novices who may be intimidated coming into the program.

Johnson said, “Definitely with novices it’s kind of daunting sometimes. I know when I came in as a freshman novice, I was really kind of intimidated by the varsity girls. So it’s really helpful to talk with them and be like, ‘I was exactly where you are and look where I am, you’ve just got to work hard.’”

“[Now as] an upperclassmen, even though I started out as a novice it’s rewarding to help new girls come in and help them become acclimated to Mason and more comfortable with the team,” she said. “It’s interesting to watch them get faster throughout the season and it’s really rewarding.” 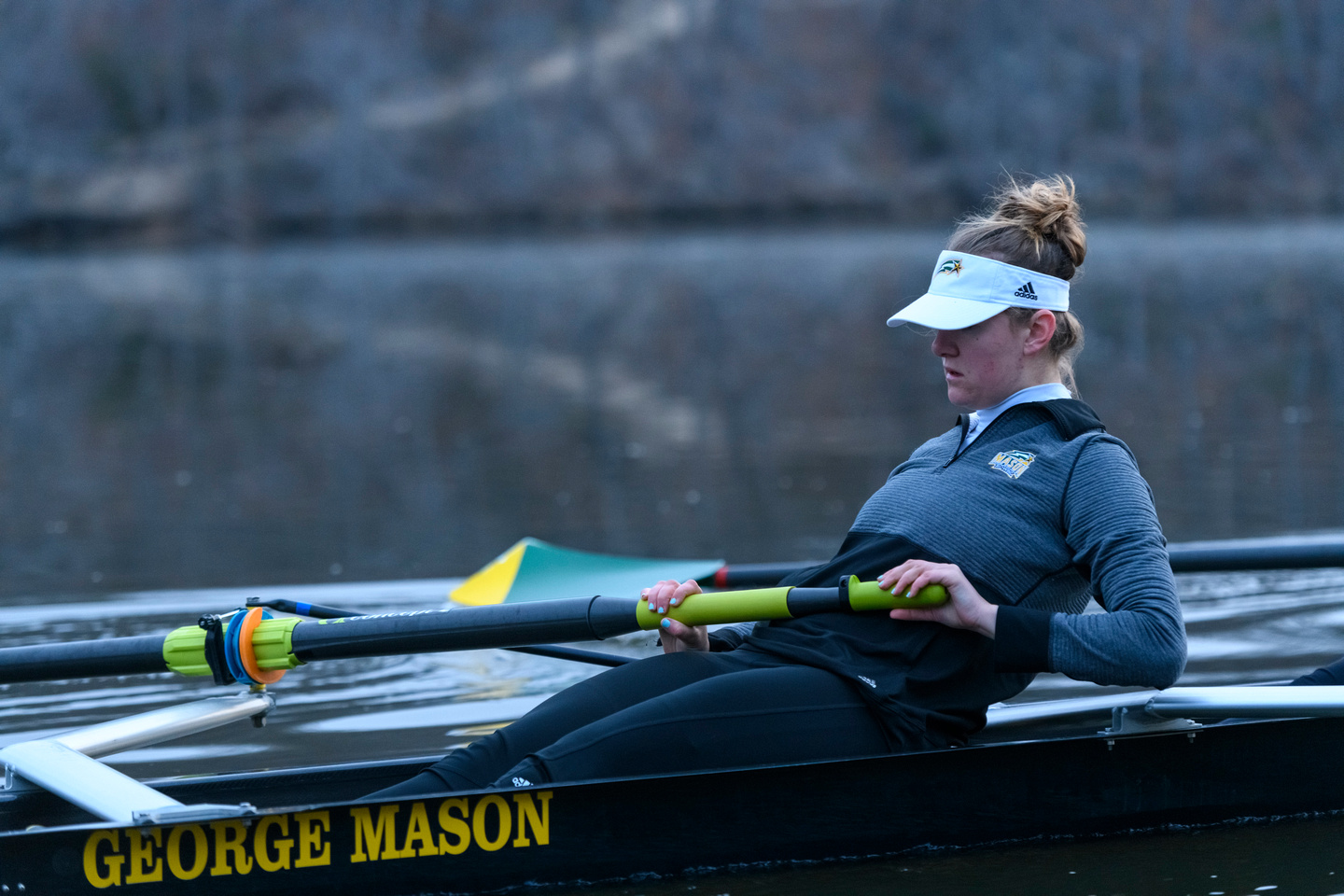 Assistant Coach Elizabeth Hilton added, “I think she sets a really good example of how to do a lot of things and she goes through cycles trying to balance [her academics and sport]. Her honesty in talking to us about her struggles is what helps her become a better leader for us.”

While coach Hilton was not hired onto the Mason staff until the fall of 2017, a year after Johnson joined the team, she stated that she has definitely seen Johnson improve during the time she has been coaching at Mason.

“She was quiet, but extremely positive and easy to talk to and was welcoming to my coaching even though she really didn’t know me … As I have gotten to know her, she’s become just a quiet powerhouse. She’s not going to be such a loud or vocal person, but she’s a leader on our team. She’s a leader by setting an example, and doing her job.”

Hilton continued, “For someone that didn’t start the sport ‘til later [in her life], she’s just so invested in getting better and is not one to complain about balancing her rowing career with her school career and choosing to do something that’s difficult.”

With six races left on the schedule before the A-10 Tournament, Johnson has high hopes to close out the season, stating, “[As] a team, one of our main goals is to get all boats into the finals at A-10s. That’s basically the end goal, just to have something to show for all the hard work that we put in throughout the year at the end of Spring season.”