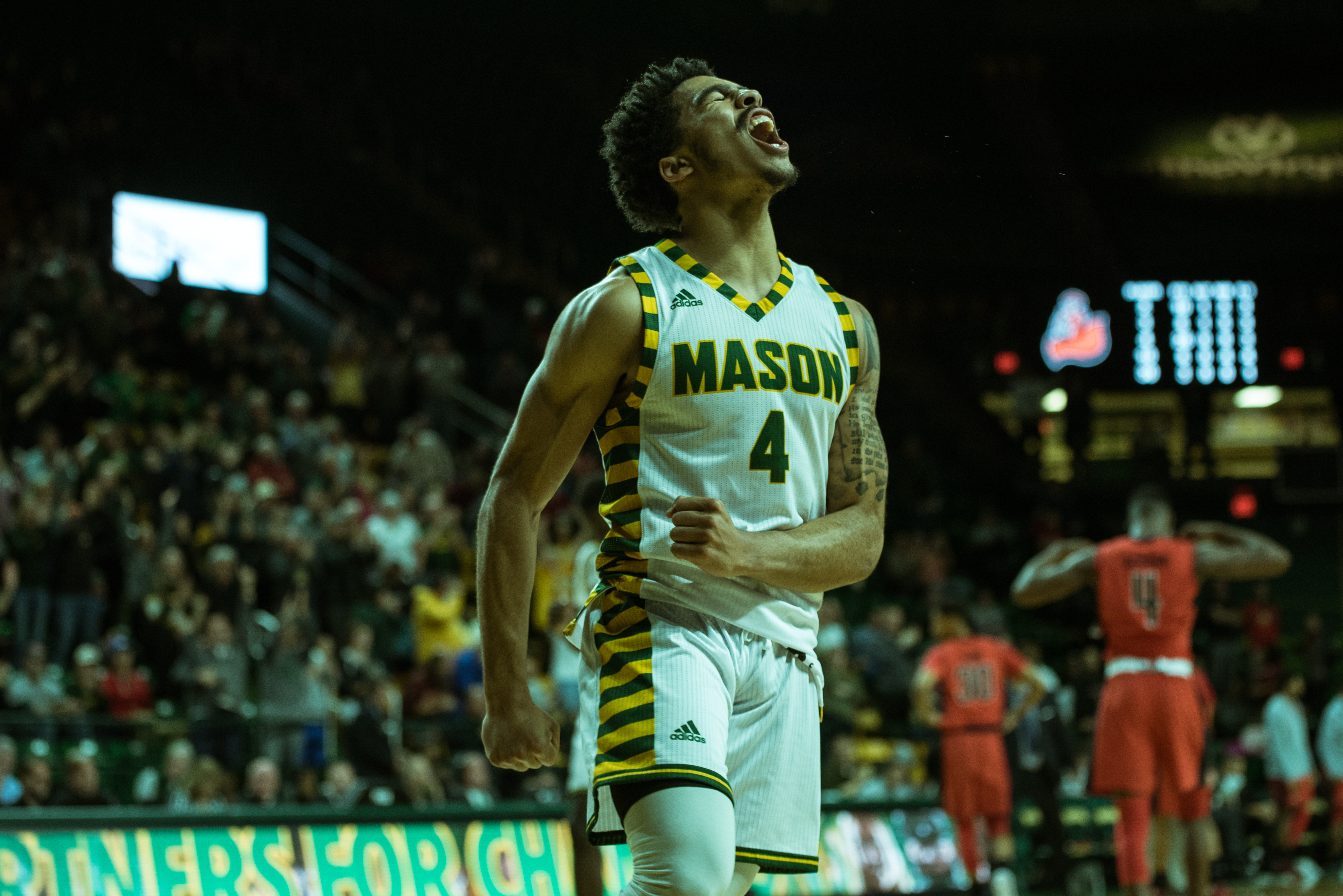 As the final buzzer sounds, the Green Machine begins playing the fight song and senior Otis Livingston II makes his way over to Doc Nix.

This exchange is familiar. It’s been happening since Livingston was a freshman.

When asked why he does it he responded, “They rock out, they play hard, especially on days when it’s doubleheaders like this and they’re rockin’ back-to-back. I just wanted to let them know that they’re appreciated by me and my teammates and they deserve that recognition from the people that they’re cheering on and playing for. I just wanted to let them know, ‘thank you.’”

Livingston’s basketball story started in northern New Jersey, long before he stepped onto Mason’s campus in 2015.

“My dad hooped, so I mean when I was three he … put up a Little Tikes rim at home … [and watched] the game. My earliest memory was watching the Lakers in the playoffs and my dad going crazy.”

He started playing recreational basketball when he was 6 and also played baseball until seventh grade.

“Basketball, it was my first love. Baseball, I kind of stopped having fun [with] once I got to around middle school. I didn’t really have fun playing the game, so it didn’t really make sense [to keep playing]. But basketball was always going to be my sport regardless.”

Though Livingston grew up watching Magic Johnson, following in his dad’s footsteps, he became more conscious of how he played while watching  players like Steph Curry, Chris Paul and Steve Nash. However, the person that influenced him the most in basketball was his own father, Otis Livingston.

“My dad, he taught me how to play the game; [he] taught me how to dribble, shoot, pass, taught me the mentality, [and] how to approach the game: pass first. Pass the ball [and] get your teammates involved,” Livingston said.

Though his dad never wore the number “4,” Livingston Sr. did start the family tradition of wearing number “24.”

Livington will be remembered long after he leaves the court for the last time. He currently sits fourth all-time in scoring, second all-time in assists and first in free throw percentage.  Furthermore, with every game that he starts, he will continue to extend his own record for most starts in a Mason uniform, he currently sits at 128.

His consistency has been a cornerstone for the Patriots for the last four years. He averages 14.3 points and 3.8 assists per game over his four years in green and gold.

“I think to play the point guard position and be in attack mode, but also to help facilitate for your team … that’s the hardest balance to find,” said head coach Dave Paulsen. “And he played it [the point guard position] well as a freshman, but he’s continued to mature, just in his decision-making, and he really involves other guys, and yet he still looks for his offense.”

When asked what he hopes his teammates have learned from him, Livingston responded, “[To] always keep your head up no matter what. I’ve been through a lot since I’ve been here. Each year has been better, but never easy, and I feel like that they can just learn that from me. Just keep your head up, just move on to the next game, next day, next practice, and just have a smile [and] just enjoy [it].”

In Livingston’s first season at Mason, the Patriots went 11-21 and won just five conference games. In each of his next two seasons, the team went 9-9 in Atlantic 10 play. This season the team won, for the first time, its 10th game in conference play. 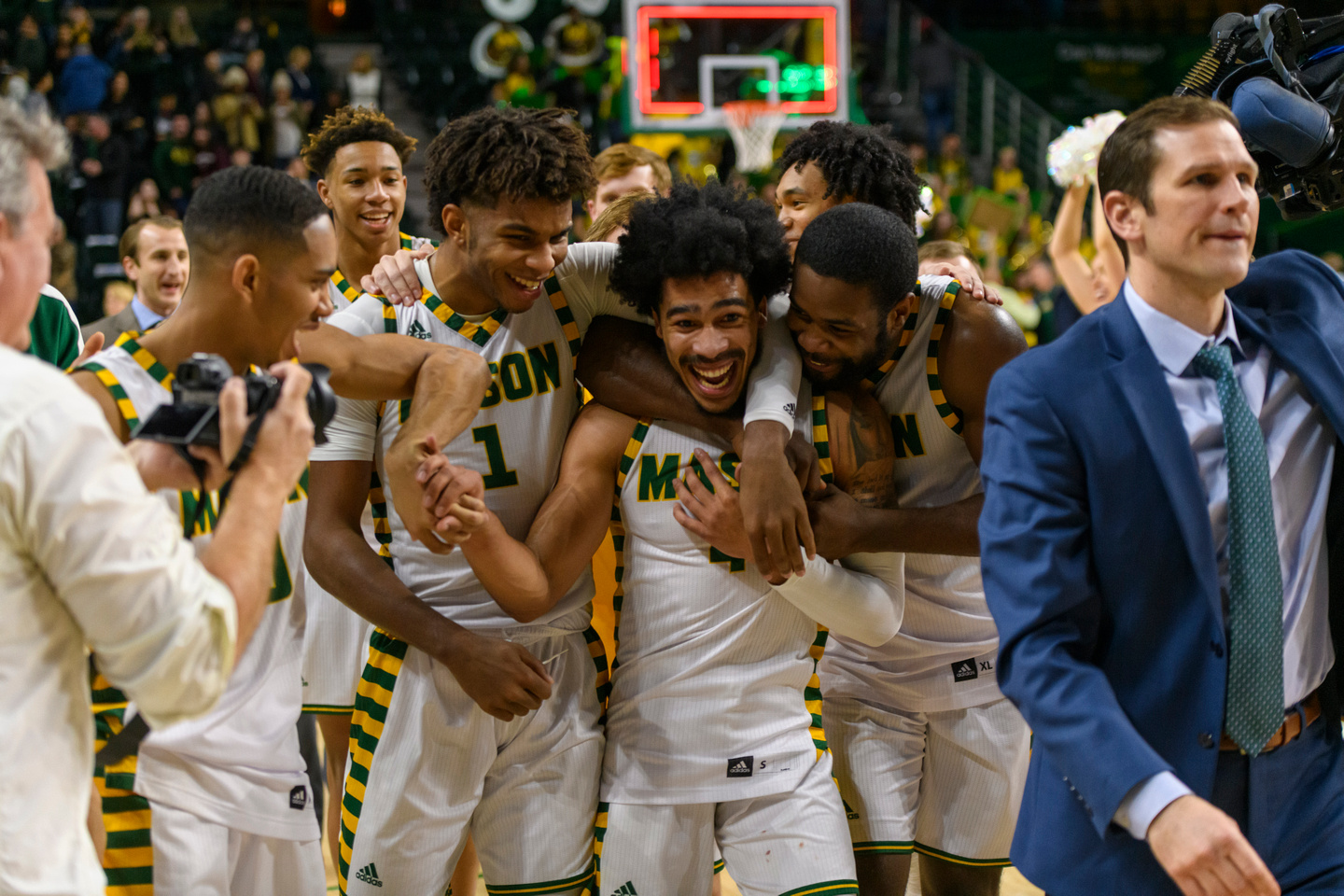 Part of this improvement occurred as a result of a culture change in the program. Livingston’s freshman season coincided with Paulsen’s first year coaching at Mason.

Paulsen talked about his leadership, saying, “He’s led in the sense of a tireless work ethic. He brings that competitive spirit, and that rubs off on his teammates[…].”

Paulsen continued, “[With his] quiet leadership this year, we now have a more well-rounded team; we have more scoring options to figure out, ‘Hey, what does the team need?’ He’s done that and other guys see that … he’s willing to do whatever the team needs.”

Livingston doesn’t have a favorite basketball memory, and although every A-10 Tournament win is special to him, there’s still one feeling he values more.

“I would say just every game I get to go out there is a great memory for me … Coming out of high school, I didn’t really have a lot of opportunities. So just to come out here, tie my shoes and play the game I love here is just a dream come true for me.”

After he graduates, he wants to stay involved with the sport of basketball.

Though basketball has been a part of his life for a long time, Livingston knows that what he does is bigger than that.

“I feel like I always wanted to make an impact off the court with the fans and the community, letting them know that I appreciate them and it’s just bigger than basketball. [Just like] how you make [the] little kids feel … when you go up to them and they smile from ear to ear, things like that,” he said.

“Those things will really be remembered, and those are the things I’ll think about later on in life. I won’t really think about the points, the assists, [or] the steals; I’ll think more about the connections I have with the people[…].”

While this may be Livingston’s final semester here on campus, he stated that he will always remember the support he has garnered throughout his career here at Mason.

“I’m just really grateful for my time here and just the people that I [have] met, the support that I get when I walk around campus[…]. I know they have my back regardless. I could come back 30 years from now and I’ll still feel the love here, and that’s something I’ll really cherish too.”

Though his final game in EagleBank Arena is coming, and his final walk over to Doc Nix as Green Machine plays the fight song is fast approaching, neither Livingston nor the fans will soon forget the impact he has had on the program.