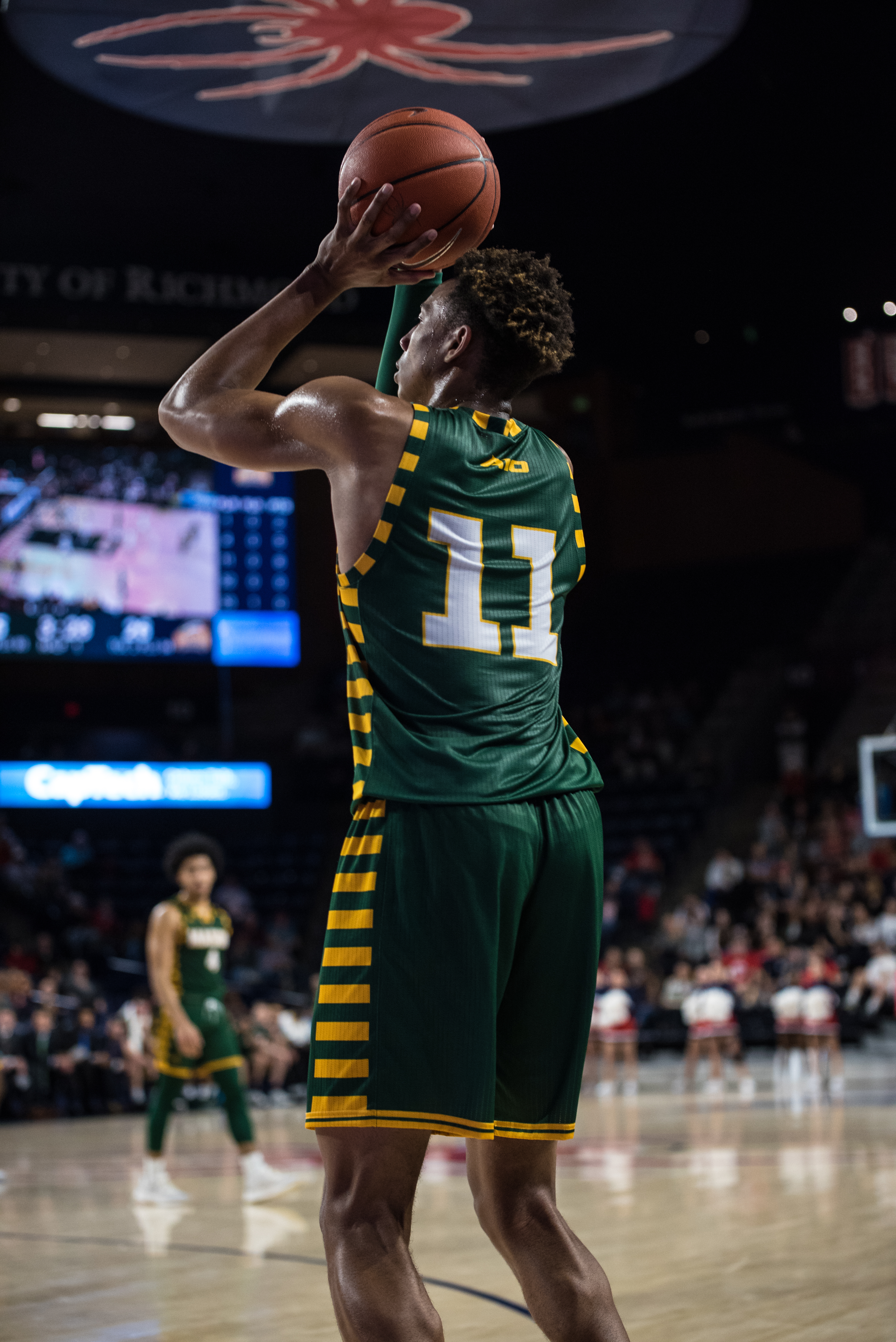 It was his first year at Mason, and he had yet to play in a game.

He sat 12th on the depth chart with little to no hope of playing this season.

However, after a couple of injuries to the team, he finally saw playing time for the green and gold.

As a result, Men’s Basketball’s Jordan Miller has had quite the run since his days playing at Loudoun Valley High School.

The DMV product started his basketball journey at age 11, the reason why he wears the number 11 on the court.

His passion for the game has been influenced by many people, including his family.

During his junior year alone, he recorded 711 points, earning him Virginia High School League’s 4A Player of the Year Honors.

Leaving high school as the all-time leading scorer, Miller soon had to transition his play to the college level. He realized he would be able to play at the next level during his sophomore or junior year.

“That’s when I really got my confidence, and my coaches were telling me if I work I could make it,” Miller said.

Head coach Dave Paulsen knew he had a special player but found out about Miller in an interesting way.

“There was a George Mason alum who tipped us off to him early in his career, like, ‘Hey, this kid is from the area and grew up a big Mason fan,’ so we kind of jumped in there early on him, and the first time I met him,” Paulsen said. “[I was] just really impressed with him as a young man.”

While Paulsen and his coaching staff were looking at other recruits in the area, he noticed that there was something about Miller that made him different.

“[First] is his versatility, and that has been on display,” he said. “[The] one thing that really stood out was that he has an uncanny ability to score around the basket. You know some guys you see make the nice move and go in there and miss it, [but] he had an uncanny ability to put the ball in the basket … and that’s a real knack.” 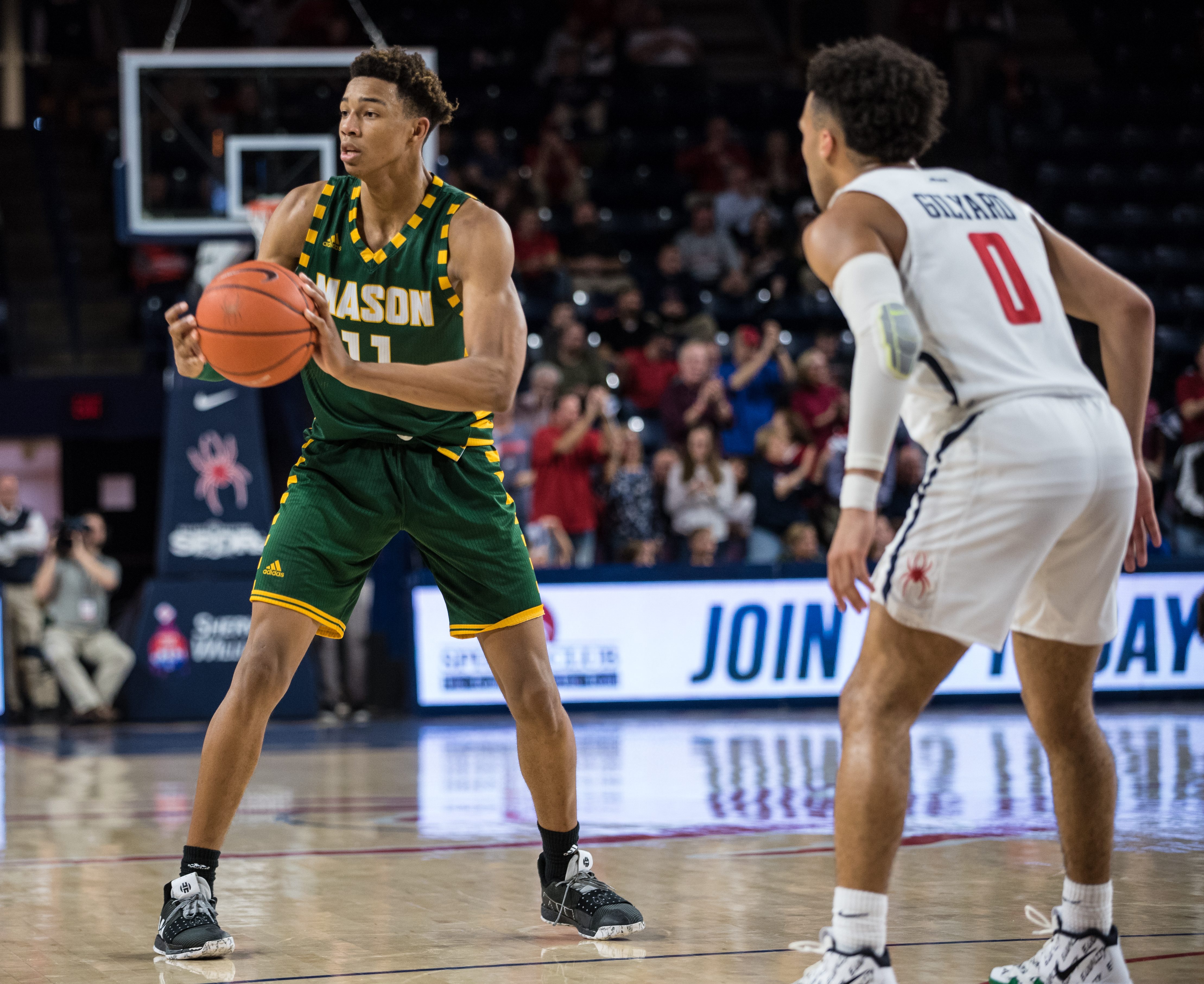 “Then his size,” Paulsen continued. “For a wing, he’s got good size and athleticism. And then more than anything is his character. He’s just an awesome kid from a grounded family, and has the right values as a person and a good work ethic.”

After Mason finished nonconference play 6-7, Miller was on the brink of redshirting his freshman year. However, after injuries to senior Jaire Grayer in November and sophomore Goanar Mar in January, things started to change over the winter break.

Paulsen started pushing Miller when he lost one of his starters, saying, “[We] were like, ‘Okay, we’re fine,’ and then when Jaire went down, I had [Miller] on the green team, and was like, ‘How is he going to respond?’ And [ended] like, ‘No, let’s not do that.’”

“You’ll have to [play], but you’ll have to play 15 minutes a game, I promise,” Paulsen said to Miller after Mar went down. Paulsen continued, “And I thought he’d be good, but I didn’t think he do as well as early, and [he] shows a lot of poise.”

“[When] we were talking about redshirting, he just wanted to get better,” Paulsen said. “So within a week of him thinking he was going to redshirt, all of a sudden I was like, ‘Woah, uhhhhh, I don’t know, like this kid is kicking some serious rear end.’”

Then the day came. It was Jan. 13 against the University of Rhode Island. Miller got the go-ahead.

“My teammates did a really good job of getting me acclimated to practice and the games,” Miller said. “So I was ready, but there was just a lot of excitement, and I didn’t want to disappoint anyone.”

In his first minute of play, he recorded a steal, a block, a dunk and a layup.

“I [want] to impact this team in any way that I can positively,” Miller said. “Just [to] keep learning, keep growing and find the way to help the team the most.”

“[Miller’s] been killing it in practice for a long time,” teammate Javon Greene said after the game. “It wasn’t a surprise from him. He just came up to play when his name was called, and he had a terrific game. We were all hype for him. In the locker room, we were just jumping on him telling him he played a great game. Hopefully, he brings this energy for the rest of the season, cause we’re going to need it.” Even after his first game, Miller says that his favorite moments in his Mason career have come from the locker room.

“Every time we go into the locker room, it’s just great,” he said. “It’s just a lot of excitement, a bunch of us just dancing and jumping around.”

After playing in nine games, starting in eight straight, he has recorded 48 rebounds and 85 points. He is currently averaging 9.4 points per game, 5.3 rebounds, and is shooting 67 percent from the field.

“We’re just focused on this year, but when you get 36 minutes, 10 points, 5 offensive rebounds, 4-6 [shooting], it’s a pretty good effort,” Paulsen said, looking forward to the rest of Miller’s season. “I think he can get better defensively, especially this year. He’s getting better with his individual assignment, but has to be better seeing rotations in the whole picture defensively.”

As the season progresses, Miller continues to grow in his game. However, he said he has one goal in mind.

“I just want to win basketball games. That’s all I want.”

Against the Universal Designated Hitter