The loss sets the tone for the Patriots in A10 Championship 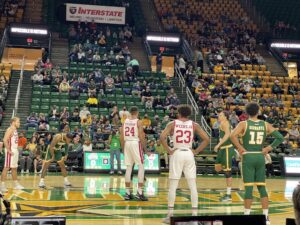 The Mason Patriots (7-9 Atlantic 10 Conference, 14-15 overall) hosted their final game at Eagle Bank of the season where they faced an unfortunate loss against the University of Massachusetts Amherst (7-11 A10 Conference, 14-16 overall) last Saturday, March 5. The Patriots were able to hold their own through overtime where they caught up to the Minutemen to tie the game 71-71 after DeVon Cooper made a stunning three-point shot. Graduate student D’Shawn Schwartz led the team in scoring where he tallied 21 points after going 6-15 from the field goal and 7-8 on the line.

Unfortunately, this wasn’t enough to stop the Minutemen’s offense. According to head coach Kim English, UMass has been one of the best offensive teams in the country after beating teams such as Saint Louis and Rudgers.

“Obviously a disappointing loss for us,” coach English said. “Kudos to UMass, those guys played really well, particularly on the offensive end. There’s nothing more dangerous [in the world] than a wounded animal and obviously they’ve had unfortunate circumstances with their program and those kids were playing heart for each other, their coach, their futures.”

Since playing Davidson, coach English made it clear that he was looking for improvement in his player’s offensive tactics. He also emphasized this game was about playing better on the defensive end.

“The emphasis is obviously getting stops,” coach English said. “Josh was better tonight, he didn’t play as well against Davidson. A more physically imposing team that played two completely different ways defensively, UMass got a lot of switching tonight but [again], it’s not about our offense, it was about our defense…”.

HISTORY IN THE MAKING

Junior, Josh Oduro became the first Patriot in the Mason men’s basketball franchise to earn First Team All-A-10 Honors by Player of the Year Luke Brajkovic (Davidson), Hyunjung Lee (Davidson), Jalen Adaway (St. Bonaventure), Yuri Collins (Saint Louis), and Vince Williams (VCU). This made him Mason’s first player to receive an individual title since George Evans in 1999. In league play, he ranked 1st in points per game, 2nd in rebounds, and 5th in blocks. He also had 11 games where he tallied over 20 points in 22 of the 26 games he played.

Graduate student D’Shawn Schwartz has had an outstanding career as a Patriot as well. Schwartz was named to the Atlantic 10 All-Academic Team which made him the first in the history of the program. He recorded an exceptional season not on and off the court–posted a GPA of 3.89 in his business analytics class which made him a candidate for the prestigious Senior CLASS Award.

The Patriots, unfortunately, came up short in the A-10 tournament Thursday afternoon against the Fordham Rams, with a final score of 54-49–after leading by 11 points in the second half yet ran into foul trouble and struggled on the offensive end.

A LOOK INTO POTENTIAL CHANGES TO MASON CORE