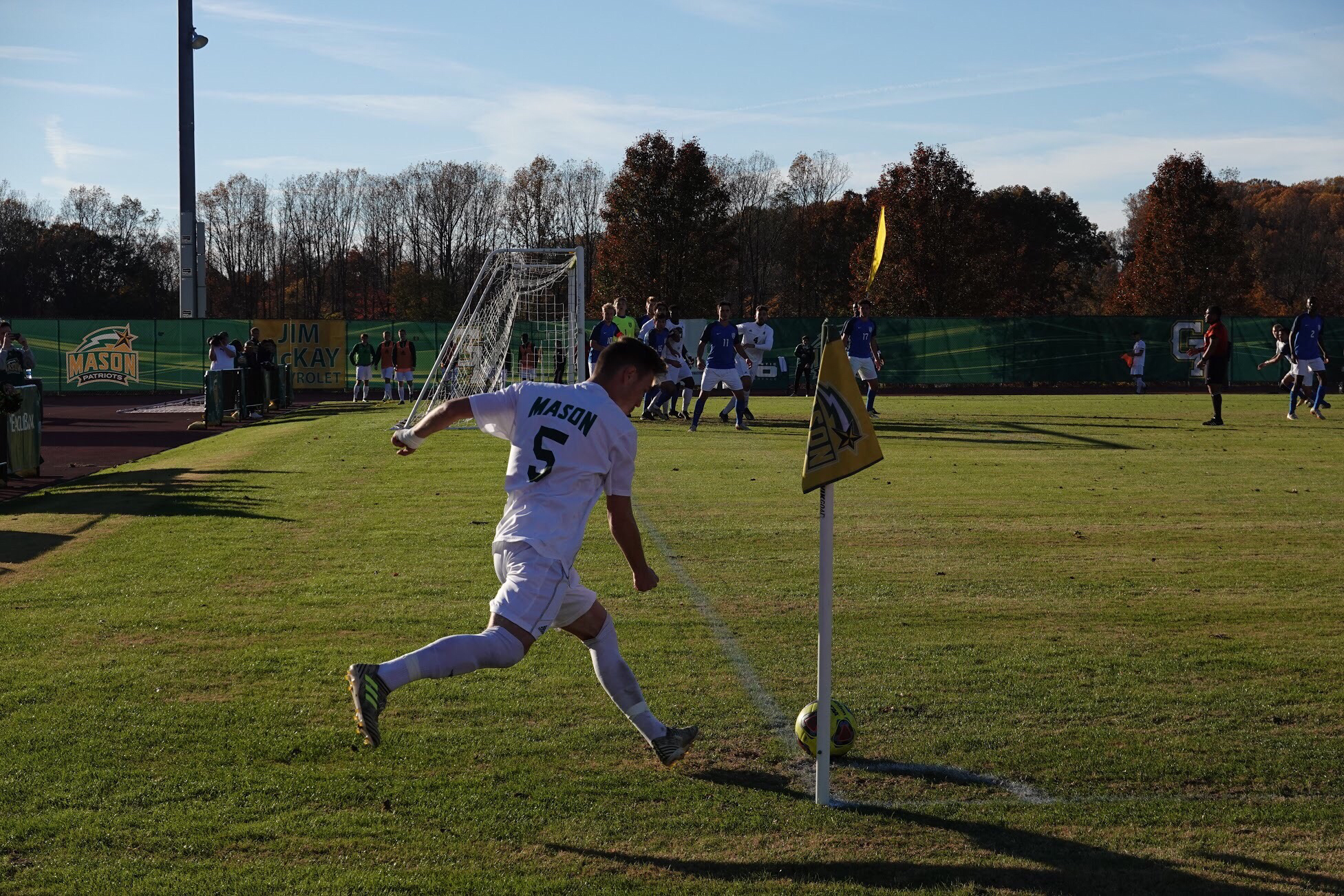 “Defense wins championships” may be one of the most cliche phrases in sports, but it’s true for Mason men’s soccer, who recorded their third straight shutout Sunday afternoon against Saint Louis University. Defense played a key role in sending them to St. Louis, Missouri for the last two rounds of the Atlantic 10 Men’s Soccer Championship.

The quarterfinals game was scoreless until the 180th minute, and if the score had remained 0-0 for about two more minutes, the game would have gone to penalty kicks.

The game-winning goal was Mason’s first shot on goal, coming off of only their second corner kick of the afternoon.

Sophomore Colin Brezniak took the kick and set up junior Pablo Pertusa Martinez, who scored off a header for his second goal of the season.

Pertusa transferred to Mason prior to the start of the season after playing two years at Monroe College, a junior college in New York.

For Pertusa it’s all about looking forward though, saying, “[T]he next step is the semifinals, we just have to go to St. Louis with the same mentality, same feelings and results will come.”

Going into overtime for the first time this season, head coach Greg Andrulis said, “We were on pins and needles, they’re a very, very good team and for long stretches of the game they had momentum but our guys were resilient… I couldn’t be prouder of the guys, they worked very, very hard to get to this point, a couple more games we hope.”

Mason has not allowed a goal in more than 352 minutes of play, going back to their Oct. 20 loss to Virginia Commonwealth University. This is in part thanks to goalkeeper Clark Gronk, who made three saves to record his sixth career shutout. The game marked his third in a row.

Going into the game, the Billikens had lost one conference game this season, recording a 3-1-4 against A-10 opponents.

The Patriots’ third-place finish in the A-10 was their highest finish since 2013, and their first winning season in conference play since 2014.

Andrulis commented on this after the game saying, “The promise that we made to the guys we recruited, the seniors, was that they were going to play in conference championships and be in NCAA tournaments and for a guy like Jordan [Edwards] who we had a couple words with at the end of the game … we said ‘we finally realized our promise to you.’”

Andrulis went on to say, “We promise that to every recruit, that they’re going to be a high-quality program that can play in big games, meaningful games, and I’m glad we’re able to keep the promise to those guys and then everybody else that’s here and it’s where the program deserves to be on a regular basis and we keep looking forward to getting better all the time.”

With this win, Mason (8-7) advanced to semifinal play for the first time since 2014, and will take on seventh-seed Dayton at 4:30 p.m. Friday afternoon. The winner will advance to the championship game to play the winner of VCU and the University of Rhode Island.

“This was a heartbreaking and devastating loss”