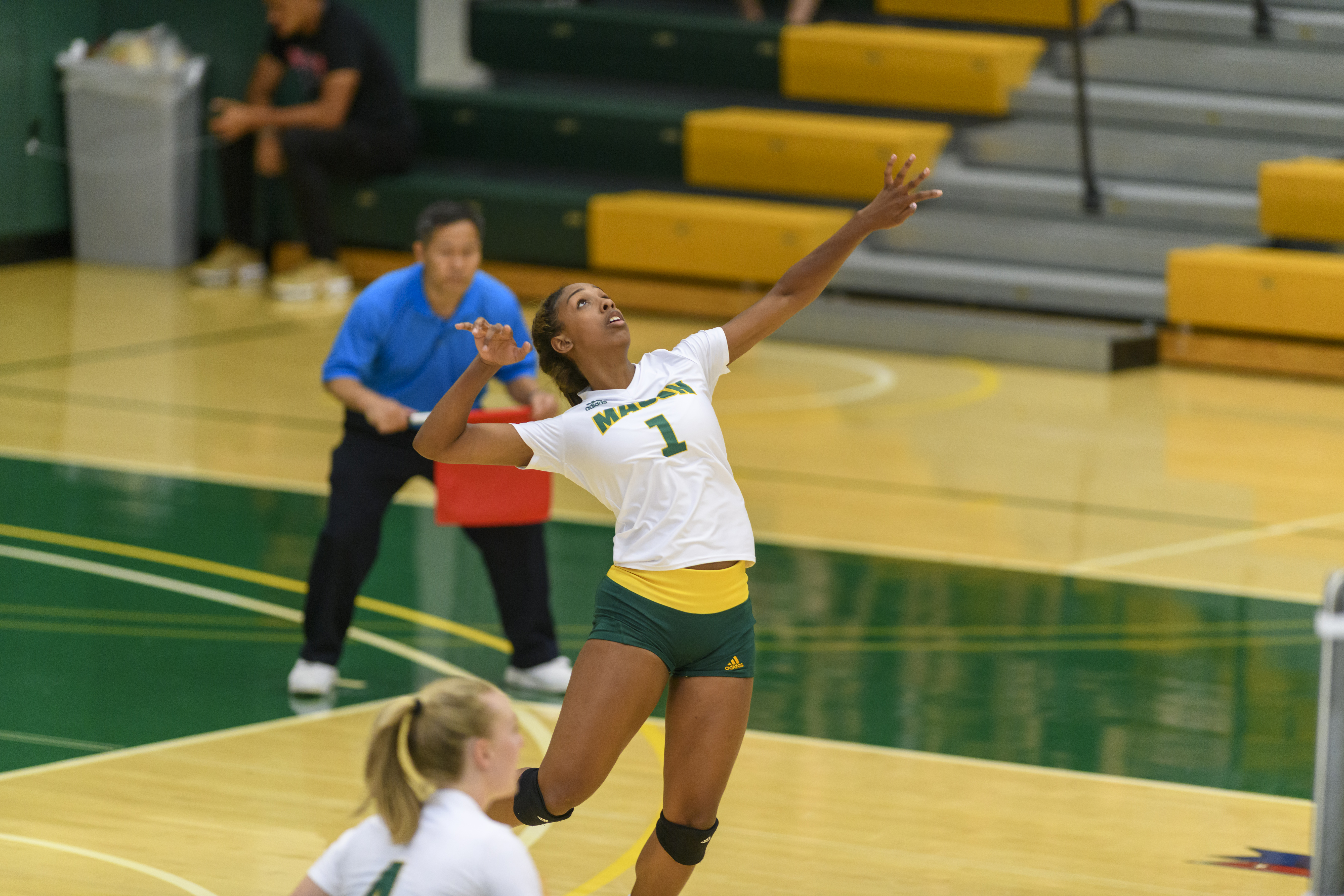 Junior Bailey Williams is revamping the image of student-athletes at Mason. Excelling on the court as an outside hitter for Mason’s women’s volleyball team as well as in the classroom as a communication student, Williams is strategic both on and off the court.

Williams’ first glance at volleyball was at the age of seven when her mom, a volleyball coach, would take her to games and practices.

“Honestly, I didn’t like it and asked why I had to be there,” said Williams. But as time progressed volleyball became more of who she was rather than what she did.

For Williams, the game is really about mind over matter. “I’m an overthinker so if I see that I’m not playing well, I tend to get into my head,” Williams said. “On the bright side, when I’m quick enough to see I’m not doing well I start to pick it up.”

Head coach Aylene Ilkson spoke to Williams’ character saying, “For Bailey, playing at your best level is everything we need. Play at 100 and we’re already there.”

Adding to Williams’ character as a player, Ilkson said that over the course of time that she’s known Williams “she’s really tried. She’s gone through many different roles and has adjusted to whatever we’ve asked her to do.”

Some of Williams’ biggest supporters are her teammates. Williams said that during any given game “we’ll come into a huddle and we’ll stand there and look into each other’s eyes just to recenter our focus.” 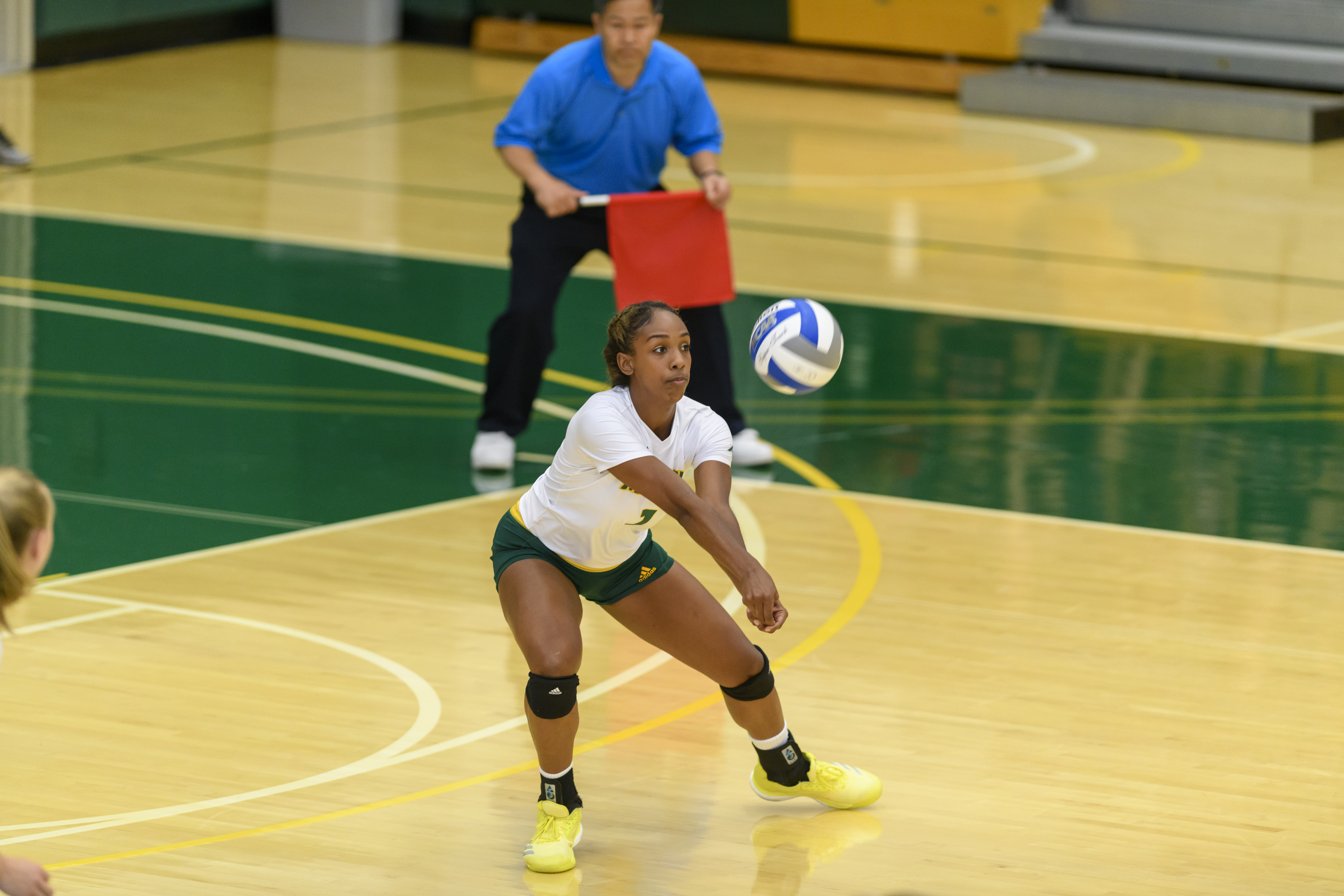 Well-known outside of Mason, Ilkson said, “Last spring I took the team to a tournament at George Washington University. The Villanova and Navy coaches both came up to me and said, ‘you have a player who goes after [the ball] all the time.’”

Additionally, Ilkson said, “when I was recruiting, Bailey’s club coach found me and blatantly told me I had a ‘one of a kind player.’ My response was, ‘Yes, yes I do.’”

It’s one thing to be recognized as a key player within one’s own university, but to be recognized by other coaches, players and fans is a true honor and shows how Williams’ skill set and personality exceed expectations.

Off the court, and with some overlap, Williams exemplifies what “an actual student-athlete is,” said Ilkson.

Majoring in communication with a concentration in media production and criticism, Williams’ goal is to intertwine her experience as a student-athlete with being a driving figure within her academic field.

After attending the Communication Forum hosted by the Communication Department, Williams said, “The department really cares about us doing well. I actually got to meet Lindsay Czarniak and ask her questions that helped me think of the things I should be doing now [for my career path].”

Czarniak, former ESPN reporter who now works for CNN, inspired Williams to further her career path, as well as sharing critical techniques needed for on-the-fly reporting such as broken teleprompters and advice for when things do not go as planned.

In addition to this forum, Williams also attended the Atlantic 10 business meeting designed for the Student-Athlete Advisory Committee (SAAC) and athletic directors.

Part of her role on SAAC is to serve as the Vice President for Mason. In this position, Williams is responsible for engaging communication between teams, giving and receiving feedback and relaying information, among numerous other duties.

Williams explained that she’s always had some sort of leadership position, but being Vice President of SAAC at Mason allows her to “be [more of] a leader and to guide people.”

Adding to her scholastic efforts, Williams is delving deeper into her major and minor. Currently, Williams is taking a PR and Social Media course.

Even though her professionalism stems from her involvement as a volleyball player, Williams said, “Volleyball will end at some point and you have to use what you learn in the classroom and implement it into the workplace.”