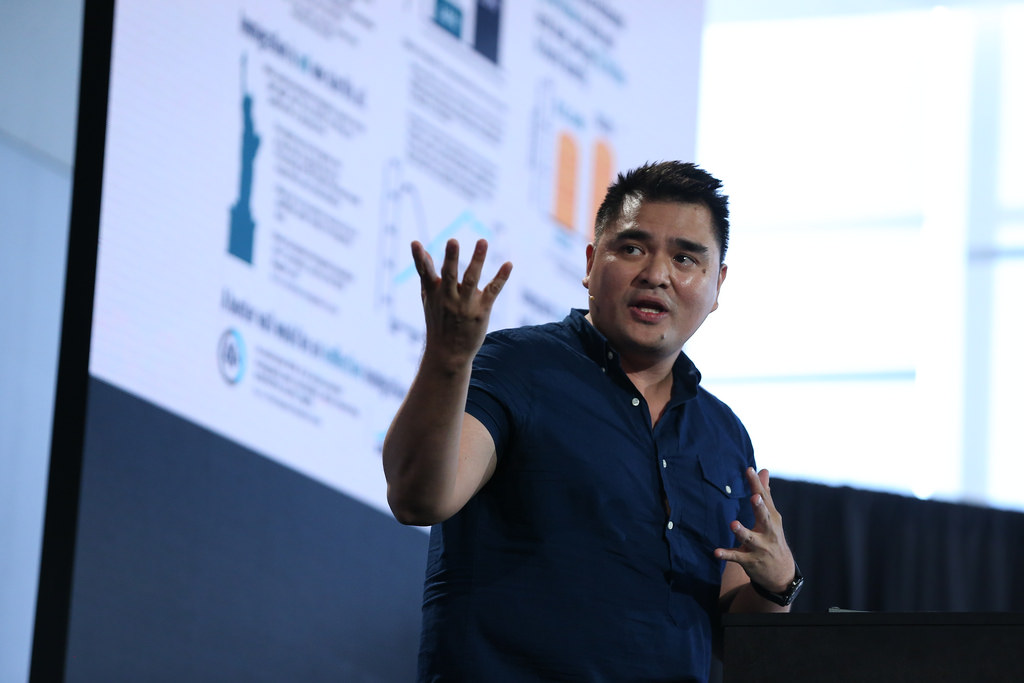 Jose Antonio Vargas, the Pulitzer Prize-winning journalist and Emmy-nominated filmmaker, made an appearance at Mason on Saturday, Oct. 20. Vargas visited Mason to discuss his new book, “Dear America: Notes of an Undocumented Citizen.”

His novel details his story as a Filipino immigrant in the U.S. Mason’s President Ángel Cabrera, an immigrant himself, assisted Vargas in leading a more in-depth discussion about immigration in the U.S.

At the age of 12, he began his journey in the U.S. With Vargas’ curious mind and ability to ask detailed questions, a high-school teacher encouraged him to pursue his talents in the field of journalism.

For Vargas, the rest has been history: multiple jobs with The Washington Post, The New York Times and Huffington Post. Eventually, he began working as a filmmaker on several documentaries.

Although he revealed his status as an undocumented immigrant in a 2011 New York Times essay, his book gives a more in-depth look. Vargas said that his initial intention was to write a book on global migration, but he decided to share his story so that others could understand from a personal perspective.

An intimate dinner with Vargas and select Mason students was held before the main event and discussion with Cabrera. At the dinner, Mason students shared stories describing their experience with immigration and related topics.

Vargas reflected on their experiences and shared some of his own with them. He seemed appreciative of the vulnerability that they demonstrated, much the same as he delivered in his novel.

The appreciation was reciprocated when Mason students became starstruck as selfies were taken. One Mason professor, Patty Mathison, even revealed that Vargas was one of her heroes.

Nearly 400 people came to the main event, which was planned by the Leadership Education and Development (LEAD) Office and the Office of Diversity, Inclusion, and Multicultural Education.

At the event, Vargas revealed, “My choice of writing a book on my [immigration] story was the most tiring thing I’ve ever done,”

President Cabrera posed questions for Vargas, whose responses covered not only his book, but immigration in the current U.S. political climate.

Vargas asserted that the U.S. is a country built on not just immigrants but Native Americans and slaves, as well. His inclusivity is intentional, as that is what he expects from social movements and allies in order to further the conversation on the human rights of immigrants.

Vargas’ bold statements struck a chord with members of the audience, especially when he clearly stated, “No human is illegal.”

Mason senior Jocelyn Martinez was one audience member who found herself reflecting as a result of Vargas’ words, “Our campus is a vital [place] to start seeing the changes that need to happen, specifically pertaining to how media [characterizes] individuals who are undocumented.”

To finish the discussion, Cabrera asked the audience to stand up if they were an immigrant. Roughly two-thirds of the crowd stood up.

He then asked the audience to stand up if any of their grandparents were immigrants. With the exception of a few individuals, the rest of the audience stood up. The crowd applauded at the visual example of connectedness among a variety of individuals.