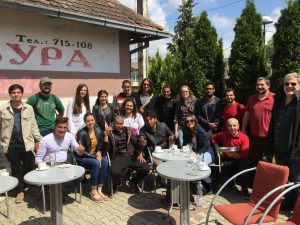 On Friday, Sept. 20, Dr. Yehuda Lukacs presented “Migration Studies,” a film about the experience of students who participated in the spring 2017 Budapset study abroad. The film, which highlighted the student’s visits to refugee camps in Serbia, premiered in the Johnson Center (JC) Cinema.

The 50-minute documentary takes the audience on a journey with Mason students who traveled from Budapest to Serbia in order to meet with refugees and migrants. The program has three major themes, according to Lukacs: global migration, nationalism and national identity, and minority rights.

2015 marked the beginning of an influx of migrants mainly from Syria, Afghanistan and Iraq into Europe. Known as the refugee crisis, the phenomenon sparked a global debate over the rights of those migrants and the responsibilities European countries have to take them in.

A semester-long study abroad program, called “New Borders in a Borderless Europe: Refugees, Minorities, and National Identity,” was created here at Mason in response to the crisis. The program in Budapest allows both undergraduate and graduate students to take classes about 21st century immigration in Europe, and gain internship experience with Hungarian non-governmental organizations.

“We have recently become intolerant of this kind of movement of people … but it is very important,” Lukacs said. The film gave a poignant perspective on an issue that many have read or heard about. “This film is to humanize the issue.”

In the film, the students were asked to describe how they felt about what they were experiencing, and many opened up about their own lives.

Many of the students were children of immigrants or immigrants themselves. One of the program participants lived as a refugee in Djibouti for the first six years of his life.

“I think it is very unique to have students who are immigrants themselves to interact with refugees,” Lukacs said.

One of the most important perspectives that the film offered was that of the refugees themselves. A migrant from Algeria left behind his family and now “only has God.” Another teenager said that all they wanted was a “relaxed life and to be able to go to school.”

The students had an opportunity to talk with the migrants, and a few played games with the children. The refugees opened up to them, but many found it difficult to find the right words to say.

“This program touches on the most salient and burning issues,” said Lukacs.

For those interested in learning more about the program, Lukacs will be having an information session on Wednesday, Sept. 25, at the Global Education Office in the JC at 1 p.m.