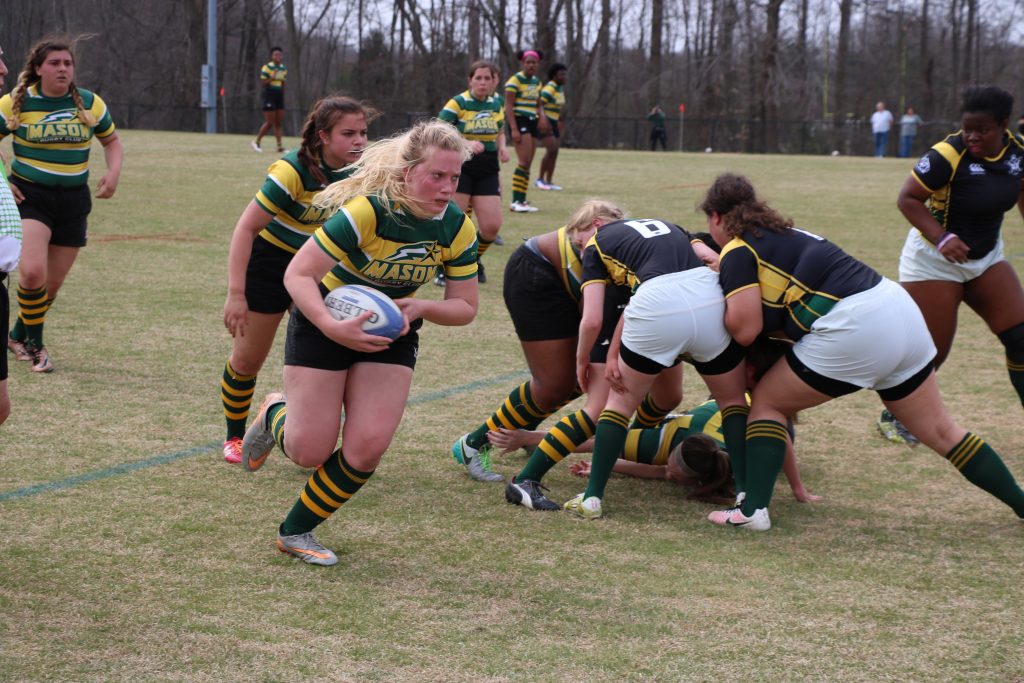 Women’s Rugby Is the Place for Camaraderie and Confidence

“Hey what’s up, you want to play rugby?”

Many students will recognize the common call of a friendly woman, holding an oblong ball, to people passing by the JC kiosks. The Mason women’s rugby team is always looking for more members to join the ranks.

“It boosted my confidence more than I ever thought it would,” said senior Lizzie Gomes. “I mean, now I feel like I’m more outgoing, I’m definitely more fit and I have an amazing group of friends and I really have never been this confident I feel like aside from the brutal practices, confidence is what it gives me the most.”

The team practices Monday from seven to nine at night, and Tuesday and Thursday from 8:30 to 10:30 p.m. on field four.

“Our coach is really big on safety and teaching you the proper techniques and so it’s a safe game,” said sophomore Corey Payne. “You know what you’re doing when you go on the field so any new people get a good background before they’re thrown in or they ever really experience a game.”

Coach Matt Estes conducts the practices, which involve plenty of fitness, specific techniques such as tackling, and practicing actual gameplay to keep players sharp and ready for their next game.

Trust is a key component to any athletic team, and chemistry off the field can be just as important, if not more so, than technical skills.

“You will have a support system for as long as you could ever want it,” said junior Maribeth Howser. “It will follow you into the future, you’ll find people like Mason alum will be there, which is a really great social setting as well as an athletic setting.”

In rugby, each player’s number corresponds to a specific position on each team. For example, the number two refers to the hooker position.

“I am tighthead,” said Payne. “I’m in the scrum, the big pile of people pushing against each other, I’m one of the people in the front row and we’re pushing holding the scrum up and together and so that the person in the middle, the hooker, can get the ball and so we can win the scrum and keep possession of the ball.”

“I’m a lock,” junior Maribeth Howser said. “Lock is the second row in the scrum, the ones that push the scrum against the opposing team’s scrum. They also are responsible in the forwards for making tackles and things like that.”

Howser says the key to making a good tackle is “getting low” then going “low to high.” She also says the key to a good player is tacking “because you can only run so far, but if you can’t stop someone whose running then that’s their person who is going to make the first try.”

In rugby, a try is the act of carrying the ball across the opposing team’s goal line to score a total of five points.

“I get so much pent-up aggression from throughout the week, mostly from stress of school, and I can just take it out on somebody on the field and not get in trouble for it because that’s the game,” said Gomes.

Any student interested in joining women’s rugby should email masonwomensrugbyclub@gmail.com, or look out for their next tabling event at a JC kiosk.

“Honestly, rugby will change your life,” said Payne. “It’s similar to football and soccer but its genuinely so different. Especially for women. You’re told, ‘oh, be careful don’t do that,’ but this is a sport where you can really let your aggression out in a safe fun environment that’s really isn’t provided anywhere else.”