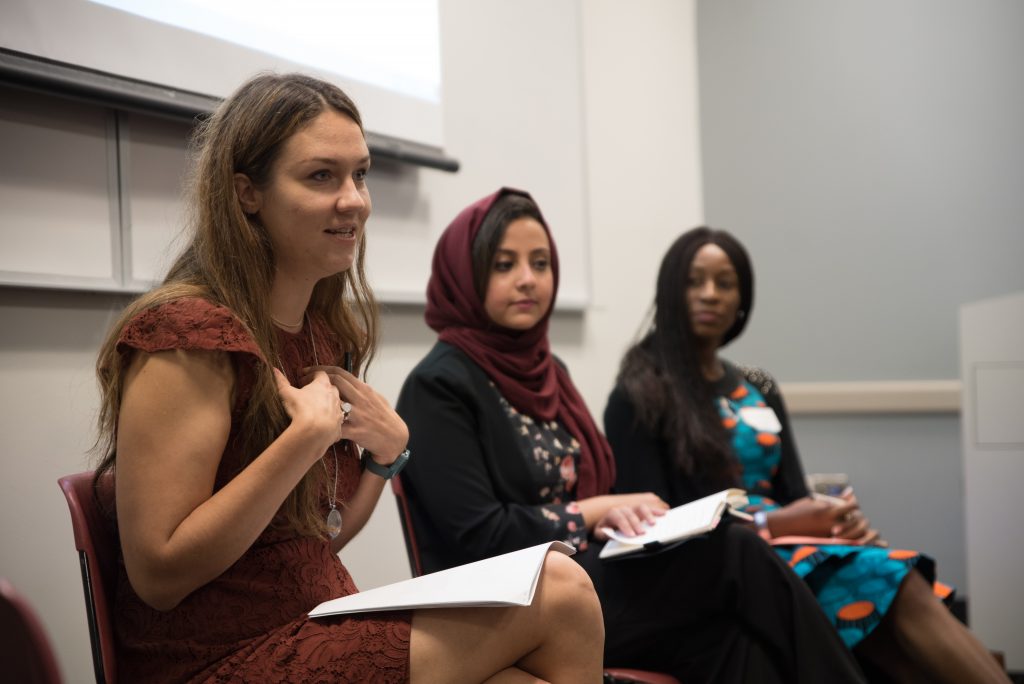 Three international fellows drew a small but diverse crowd in the Johnson Center’s Gold Room on Tuesday, Sept. 18 for the Global Perspectives Conference. The conference was put together by the Women and Gender Studies program (WGST), the African and African American Studies program (AAAS) and the Student Media program.

Sahar Sarsour, a fellow from the Gaza strip, described her home as being the “world’s largest open-air prison.” There are no airports or freedom of speech, and limited electricity.

In order to fully explain the conditions that citizens and members of the press face, Sarsour presented a video of multiple journalists who gave their lives attempting to record what was happening that they believed was unjust. Although legally the Palestinian government has guaranteed freedom of assembly to its citizens, it is largely not practiced, and politicians and journalists can be jailed or killed for criticism of the government.

Sarsour works for an organization called Press House Palestine. She is also a teacher of English as a Second Language (ESL).  Throughout her presentation, she emphasized the importance of learning English for Palestinian journalists so that they can communicate with the world outside of Palestine.

Onyinye Edeh, who spoke next, also emphasized the importance of having a voice, specifically for girls in northern Nigeria. Edeh spent two years in Nigeria researching girls’ health through the Institute of Current World Affairs.  She found that there were four major problems that were affecting Nigerian girls: poverty, lack of access, childhood marriage and female genital mutilation.

Edeh advocates for government interference in these areas. Edeh is interested in examining why these cultural norms exist and would like to see “no tolerance for abusers.”

The final speaker was Rugile Butkevičiūtė. Butkevičiūtė is a lawyer from Lithuania, where domestic violence is a major problem.  She attributes this to a culture that has a high amount of violence and toxic masculinity within it. Butkevičiūtė works for the Women’s Issues Information Center which is a non-governmental organization that “seek[s] equal rights and opportunities for women…in Lithuania and to improve women’s position in…private lives.”

After the third speaker, the question period began. Students asked questions that ranged from rape culture in personal relationships to questions about the cultures in the three countries that the speakers represented.

If you are interested in attending similar events, the WGST and AAAS departments encourage you to view their website for a calendar of upcoming events.