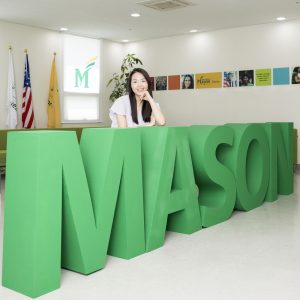 When Mason Korea first opened its doors in March of 2014 in Songdo, South Korea, only 34 students were enrolled to learn from just a handful of faculty members with only two majors to choose from.

“I had both worries and expectations being a part of Mason Korea’s first freshman class,” said Seung Su Yu, now a senior studying Management. “It meant that I would be the first one to experience the unknown.”

Yu, along with his 33 cohorts, were the first batch of brave students to venture out into this historic project for Mason.

While Mason Korea came from humble beginnings, it has grown into an expansive campus with a tight-knit community of 624 students and over 70 faculty and staff members, last recorded in August 2019 by the Incheon Daily.

Celebrating its fifth anniversary this year, Mason Korea is still in the beginning stages of university life and is continuing to branch out to increase visibility.

But in its endeavor to expand and gain recognition, two issues linger for students: lack of representation of Mason Korea at the Fairfax campus and lack of effective communication between the two campuses.

“I feel like there’s not enough exposure here in the Fairfax campus at all, nor is there enough support,” said Sarah Kurian, a junior who spent a semester at Mason Korea last fall.

A similar narrative seems to be present in South Korea as well.

“I have yet to meet a single Fairfax student who hasn’t expressed their surprise or frustration at the amount of information that is withheld,” said Yihyun Kwon, a junior studying at the Songdo campus. According to Kwon, there is a general lack of information given to students about Mason Korea.

“Many of them don’t realize how small the Korea campus is or the fact that there is no bookstore where they can purchase their textbooks for the semester,” she added. “On the other hand, Mason Korea students who have not yet visited the Fairfax campus hardly know anything about it.”

While Mason Korea is an independent institution, it is part of a larger global education hub — called Incheon Global Campus (IGC) — shared with four other institutions: Stony Brook University, the Fashion Institute of Technology, the University of Utah Asia Campus and Ghent University Global Campus.

“At first, I was a bit surprised seeing how small the campus was, but as time went by, I realized how convenient and cozy it was. I appreciated the tight-knit community,” Kurian said.

Although Mason Korea is a small and young community, it is a promising institution with a range of opportunities and experiences available for students.

Being located in the Songdo International Business District, a part of the Incheon Free Economic Zone, and near South Korea’s capital, there are multiple unique internships and volunteer opportunities that students studying at Mason Korea can get involved in.

“The geographical location and ‘international’ aspect of the university allows for plenty of unique internship or volunteer opportunities. Quite a number of major international conferences happen in Songdo, and the school always manages to provide us with chances to be a part of them,” Kwon said.

The 624-student population is just a fraction of the much larger 37,677 student body at Fairfax. But not too long ago, Fairfax was a tiny campus too. In just 10 years, student enrollment jumped 17 percent, according to GMU Key Facts for 2019.

“Even though GMUK does not have a long history, I know everything is set up for me to study and grow,” Oh said.

View all posts by Haseung Joung →

How the GOP Can Win on Climate Change