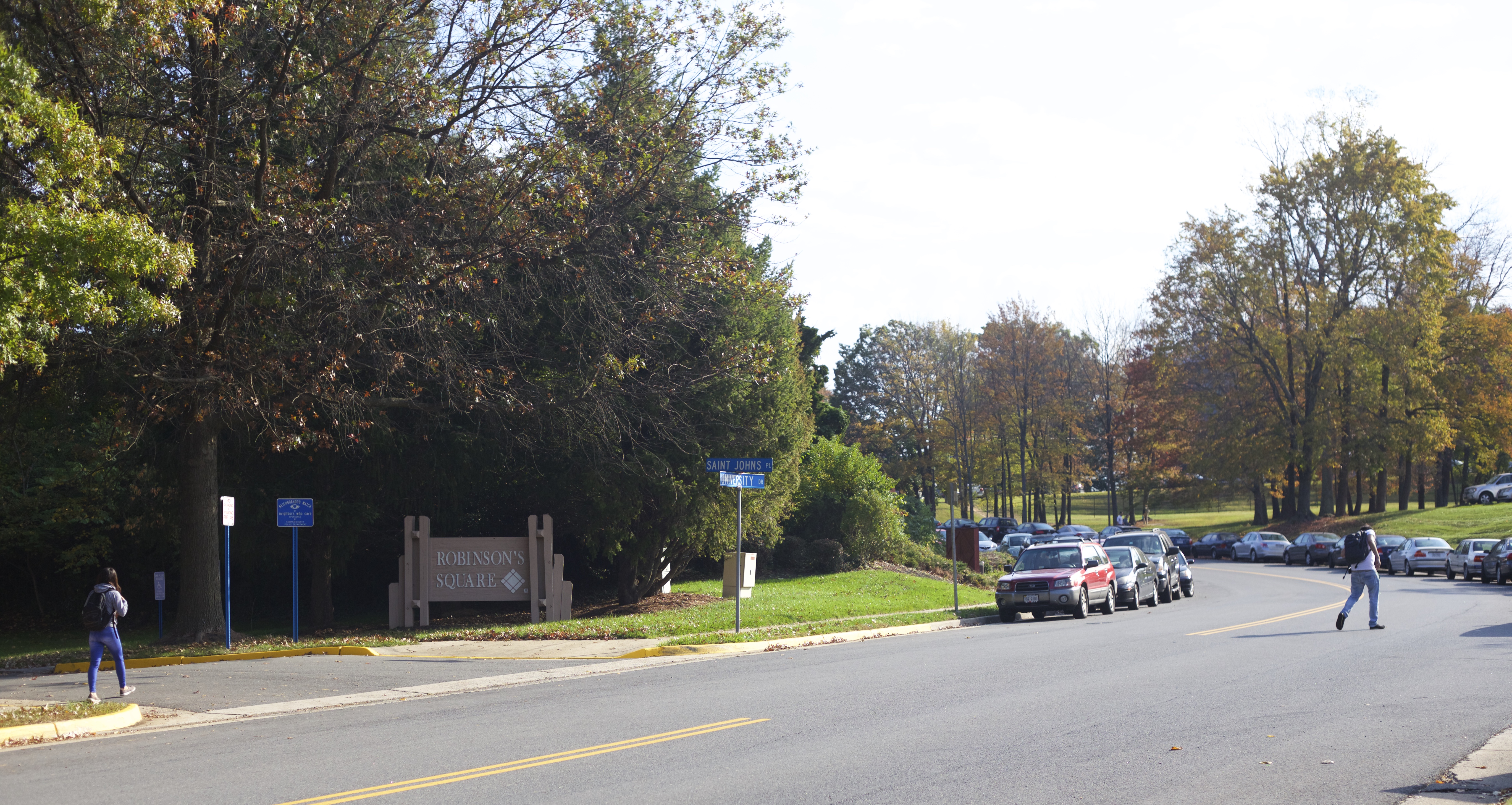 The ROTC students were seen in the area near the Field House and Robinson Square Aparments. (Photo credit: Naomi Folta)

A routine ROTC training session at Mason Sept. 22 caused panic on campus when an individual reported seeing two armed men on campus. It was later discovered that the two supposed gunmen were actually two members of the ROTC taking part in a military training exercise.

The incident left members of the community, like junior Ahmad Mohammed, wondering why the university was unaware of this routine exercise.

“Something I do not understand is that how they [the university] did not know that they were having a ROTC practice drill. Doesn’t Mason know that the ROTC has a practice drill on this day at this time?” Mohammed said. “They should know and it is their responsibility to know all events going on campus.”

According to a Mason Alert, around 2:30 p.m. an individual contacted Mason Police reporting they had seen two men carrying assault rifle-style weapons near the Field House. Mason Police were immediately dispatched to find and investigate the two individuals.

At 2:45 p.m., a Mason Alert was sent stating Mason Police were searching for two males near the Field House.

By 3:09 p.m., it was learned that the two males were part of the ROTC training exercise, and a Mason Alert stated there was no known danger to the Mason community. Four days later, a Mason Alert sent Sept. 26 clarified that the two individuals were ROTC cadets who were carrying plastic replicas of weapons and were participating in an ROTC training exercise.

As detailed by the University’s Department of Police and Public Safety in the 2016 Annual Security and Fire Safety Report, in the presence of an active shooter people should exit the building, take shelter and call 911. Aside from the initial Mason Alert identifying the gender and location of the two individuals under suspicion, no notice was given concerning these procedures.

For 39 minutes, members of the Mason community did not know conclusively whether the threat level would escalate or shrink. Many students who were not currently in class decided to leave campus or seek shelter for their own safety concerns.

Junior Rezwana Khan was prepared to head to her 3 p.m. class, but the initial Mason Alert was enough to deter her from staying on campus.

“I got the alert right before class and someone was yelling inside Exploratory Hall telling everyone to get away from open areas. After that I left campus because I was a little worried,” Khan said.

As Mohammed was in an exam at the time he did not see the alerts at first; he was only able to check them after his test had finished, but he recalled being scared initially.

“Before I checked my phone, the TA who was proctoring the exam told us that there were two people with assault rifles. I did feel a sense of fear temporarily as is normal in a situation as serious as this,” Mohammed said.

Mohammed added that his actions would have been different had he dealt with the Mason Alert in real time and he would have taken extra precautions by making sure not to leave the building he was in. Despite the incident, he said he generally feels safe on campus.

Michael Sandler, the director of the Office of Strategic Communications, acknowledged that the initial Mason Alert that was sent out to everyone could have been improved to be clearer and that emergency practices are being reviewed to make sure messages are timely and informative.

Sandler also stressed the importance of collaboration between ROTC and Mason Police and said, “ROTC leaders must work with university leaders to ensure that their exercises are consistent with university policies.”

Mason Army ROTC declined to provide further comments and said they were no longer commenting on the incident.

Sandler said that despite the miscommunication, it’s important to recognize what worked well the day of the incident. He said the university succeeded in communicating the potential threat in real time and then quickly communicated the outcome of the police investigation.

Brian Higgins, Mason Police’s active threat resource officer, also conducts classes on the prevention of and response to active threats that may exist on campuses, such as active shooters. For more information, visit the Mason Police website.