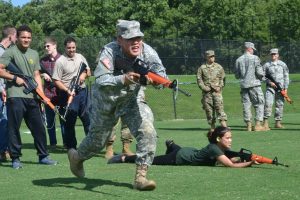 On the second level of the Recreation Athletic Complex (RAC) lies an office reserved for a specific program on campus: the Army Reserve Officer Training Corps (ROTC).

While the office may seem quiet, behind each cubicle lies a cadet resting after an hour and 30 minutes of physical activity and lecture, ready to take on whatever challenge comes next as they aspire to become future lieutenants in the U.S. Army.

“While freshmen and sophomores are just taking the ROTC classes as an elective, the responsibilities they have differ from responsibilities given to juniors and seniors,” Diggs said. “Once students become a junior, they are given the option of signing a legally binding contract with the U.S. military, and if they do, they continue in the ROTC program.”

For Diggs, the ROTC gives her the opportunity to push herself in training. Diggs was involved in sports most of her life and so the physical activities that are given during labs are a way to show off her skills.

“We have physical training Monday, Wednesday and Friday in the morning and we have class and a lab where you put into practice what you learned in class,” Diggs said. “I didn’t start out in the ROTC as a freshman — I came in as a junior. Juniors normally learn about tactics.”

Cadet Quinn Goschi, a senior at Mason, is now in his fourth year in the ROTC program. Goschi is learning about leadership and organizational communication after mastering the basic skills of tactics and handling the ropes.

“By learning about leadership responsibilities, you can start getting positions. For instance, I have a position as executive officer of the Bravo company, which means that I am second in command of that company,” Goschi said. “I coordinate and help the commanding officers, the platoon leaders and other juniors in the ROTC program who are also in leadership positions.”

Goschi described how he handles his classes, social life and other extracurriculars while being part of the ROTC program.

“For me personally, it is a priority of how I schedule things. I start with a basic weekly calendar and I work down to each week,” Goschi said. “I look at all my [syllabi] for the semester before it starts and see what projects are coming up and how I should prepare for them.”

Lt. Col. Mike Nelson, a professor of military science in the ROTC program and the senior ranking member of the attachment, leads classroom instruction, field training, physical fitness tests and administrative requirements for all cadets.

“Ultimately we are preparing our students to be lieutenants so most of our training is somewhat technical, which means how to patrol or lead units. Some of it is professionalization, in terms of how the army functions as an organization and leadership positions. It is a little bit of training, education and acculturation, which is generally the path for our students,” Nelson said.

Nelson believes that being in the ROTC program is beneficial, even for students who decide not to become an army officer in the future.