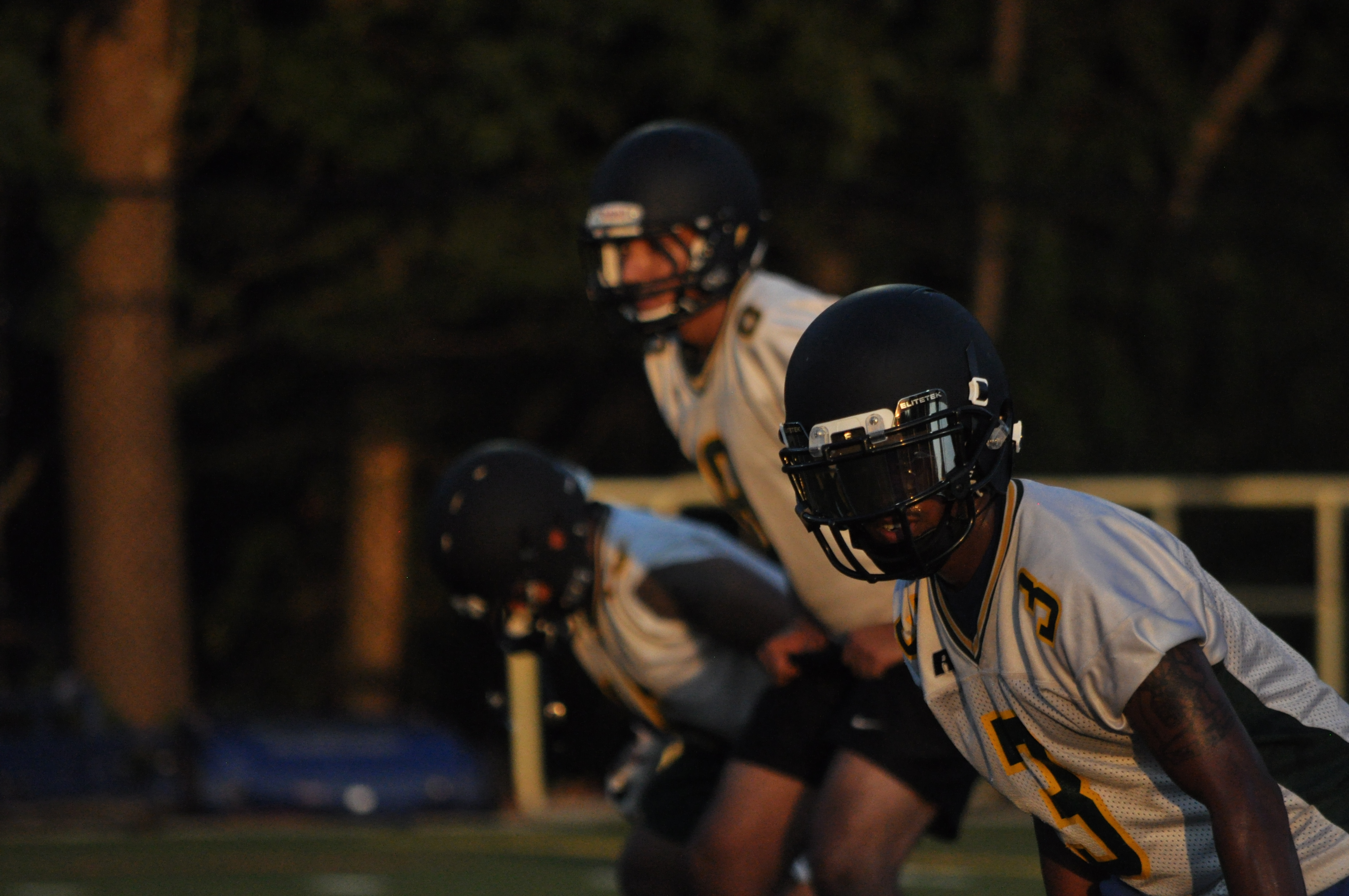 Few people think of George Mason as a football school.

That’s because Mason does not have a NCAA Division 1, or D1, football program, despite attempts to create one.

But Mason does have a club football program, and it is among Mason’s lesser known club sports.

Assistant Coach Virgil Seay acknowledged the team’s lack of recognition, saying he wants the team “to be more well-known on campus and in general.”

Seay, a former Washington Redskins wide receiver who helped win Super Bowl XVII, mainly works with the wide receivers to get them flying down the field.

“We have to make it known that we exist,” Seay said.

The team’s recognition may be increased by newly hired Associate Athletics Director Darrell Green, a former Redskin himself, who won Super Bowls XXII and XXVI and ultimately ended up in the pro-football Hall of Fame.

The team’s recognition is one of the reasons why the team uses its practice field, the RAC Field, instead of the Field House for games. The field house hosts a much larger facility than the RAC Field, with more seating, a scoreboard and greater accessibility, which may allow for larger crowds and press coverage.

“We don’t have permission to use the bigger field,” Savannah said, “since we’re a recreational team and they won’t let us.”

Savannah noted, however, that “the team is okay with this because the field is closer to the locker rooms,” thus making it “easier to get to.”

One of the major reasons that the team does not have as much recognition as other programs is because the team is fairly young (it was founded in 1993.)

Over its 23 years of existence, the team has gone through periods of success and rebuilding.

The Patriots also recorded two undefeated seasons in the mid-’90s.

Savannah said that the team is hoping to rekindle the success the team had in the 2011 and 2012 seasons, as the team is currently in the process of rebuilding. 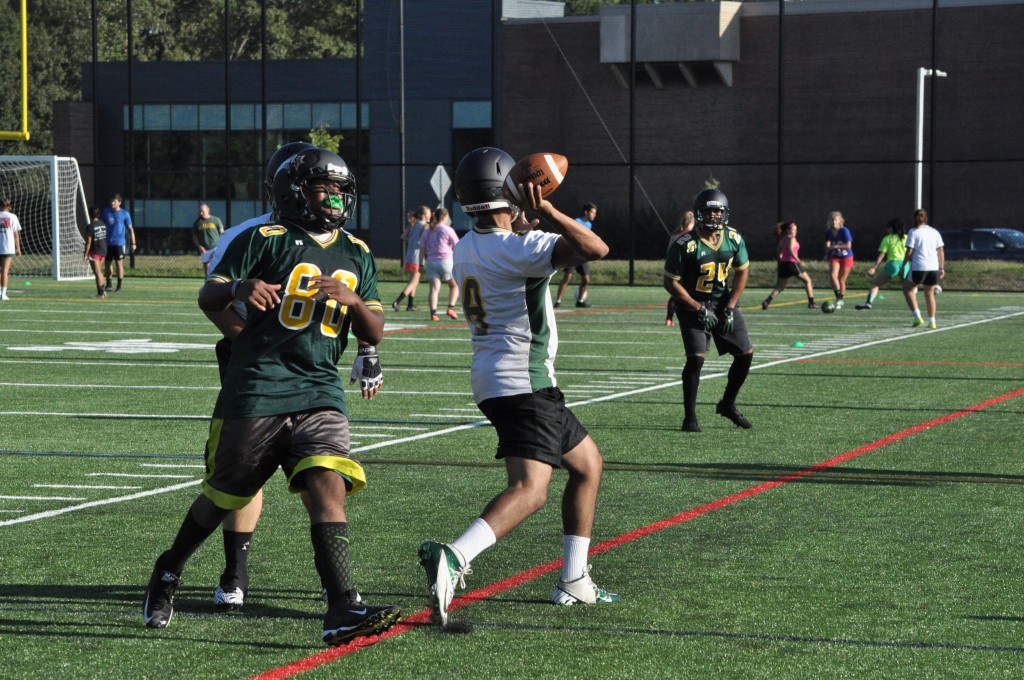 “We’re trying to get back up and become good again,” he said. “This team has a fair amount of good and bad years.”

One of the biggest challenges the team has faced, in addition to becoming more well-known, is simply manpower.

The team had to forfeit a few games the previous season due to a lack of players on the roster. There were also reportedly just a handful of players that showed up to practice on time.

At least 15 people must be on the roster for the Patriots to play, Savannah said. If the team has fewer than 15 people, they must forfeit as a safety precaution, since players would need to fill in multiple positions and thus face a greater risk of injury.

The other challenge the Patriots face is becoming a D1 sport.

“Mason had seriously considered starting an NCAA Division I-AA football program as early as 1991,” according to the Mason History Project. “At that time the University already had several Division I athletic teams, which meant that a Mason football team would have to play in either Division I-A or I-AA.”

Mason opted to pursue a NCAA Division I-AA program instead of an I-A because it would have been cheaper.

The decision to establish a Division I-AA program came down to a vote by the Board of Visitors in 1998, when “Visitor Robert Lautenberg, Chairman of the Football Task Force, presented the BOV with a 10-year funding plan for the football expansion.”

The board’s vote “was one of the closest in BOV history,” in which six visitors voted for the plan and six against, which required a tiebreaker vote.

That vote came from Rector Marvin Murray, who voted against the motion.

Since then, there have been no major pushes to bring a D1 program back to Mason. It does not appear one will form soon, since establishing a program could prove costly for Mason and its students—one of the main concerns held during the 1998 vote.

The team follows a regular season schedule that consists of seven games against other club football programs. 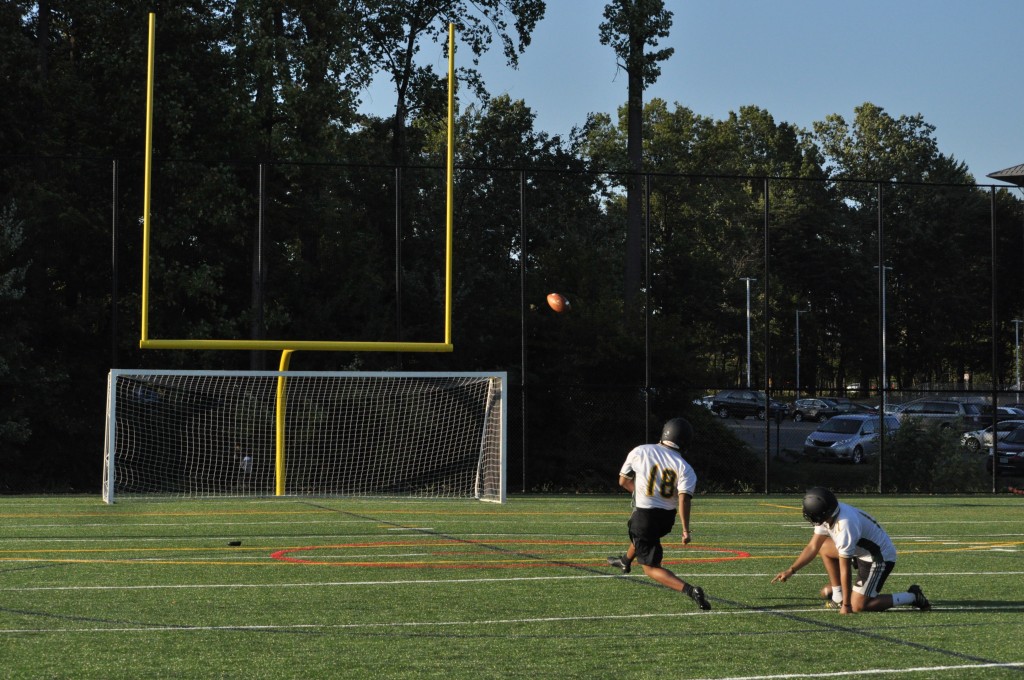 Those seven regular season games are then followed by the postseason, which culminates in a conference championship game.

The Patriots’ season for this year includes two home games (vs. Williamson Tech and the University of Pittsburgh) and three road games (at Coppin State, U-Md. Eastern Shore and Longwood University). Their season began Sept. 24, when they faced Ohio State at a neutral field in Pennsylvania.

A neutral field is essentially the same as a road game, the players and staff said, since they will be away from home.
The team’s home opener will be this Saturday, Oct. 1. against Williamson Tech on the RAC Field.