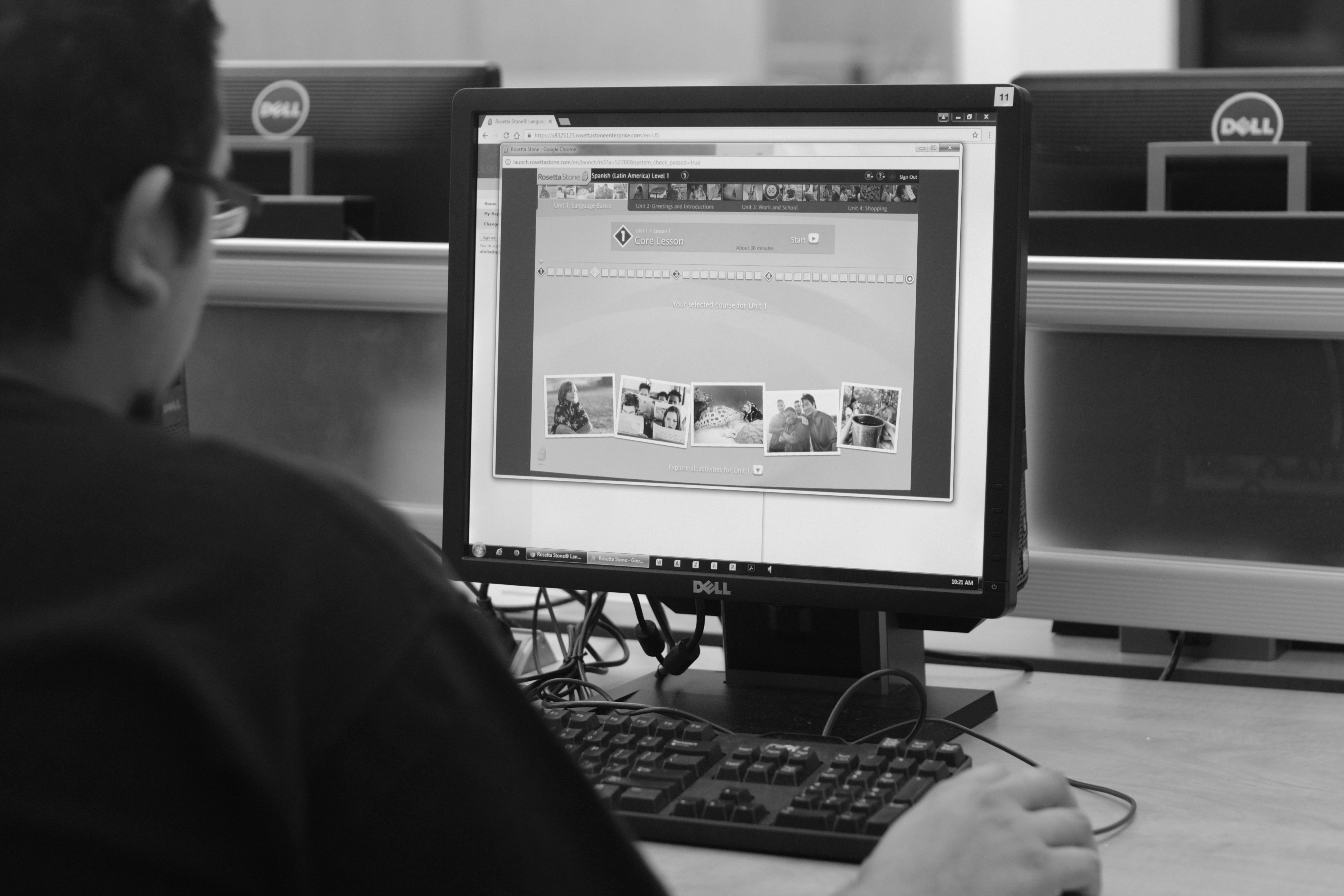 Salut! ¿Cómo andas? Heb je geluncht? From dining halls to classrooms, a chorus of languages and dialects can be heard all across Mason’s campuses. With University Libraries’ new Rosetta Stone subscription, students, faculty and staff now have free access to learning 30 of those languages.

According to Madeline Kelly, head of Collection Development for University Libraries, the library system acquired the Rosetta Stone software last spring and made it available to students, faculty and staff during the summer. Students can choose from languages like Greek, Hebrew, Irish, Urdu, Swahili and many more.

Kelly said professors in the Department of Modern and Classical Languages can encourage students to use Rosetta Stone in between class sessions to keep up with practice, especially when the course might only be scheduled once or twice a week. The Rosetta Stone Library Solution for Higher Education package, which Mason offers, is designed to allow all users to study anywhere, anytime, similar to how the library’s databases are used.

But studying for a Spanish exam is not the only reason a student might want to look into Rosetta. There are 80 languages spoken on Mason’s campuses and students come from 130 different countries. This global experience offered at Mason also lent itself to the library’s decision to provide the software.

“We were just thinking with the huge international student body and this increasing focus on international mindedness for the university as a whole, we thought that it made sense to offer something that can help English-speaking students broaden their language skills and also can help students from other countries strengthen their English language skills,” Kelly said.

Junaid Anwar, who already speaks three languages, was excited to learn that the library is now offering this service.

“I think it’s a great resource for students. I think it’s very helpful for people to learn foreign languages because it gives them more opportunities, even to make friends, especially at a school like Mason,” Anwar said.

Interested students like Anwar can learn more about the program through the training sessions being offered by the library in October. Kelly explained that the Rosetta Stone service is slightly different from the usual library resources in that users have to create individual accounts to get started, which may be confusing to those new to the program. A librarian will lead one training, but a representative from Rosetta Stone will come to Mason to lead the other.

Moving forward, Kelly said that the library system hopes to continue providing resources and services that meet the needs of the community. Although data on how and to what extent Rosetta Stone is being utilized will not be available for a few months, the library continues to receive positive feedback.

Who wants to be an astronaut?