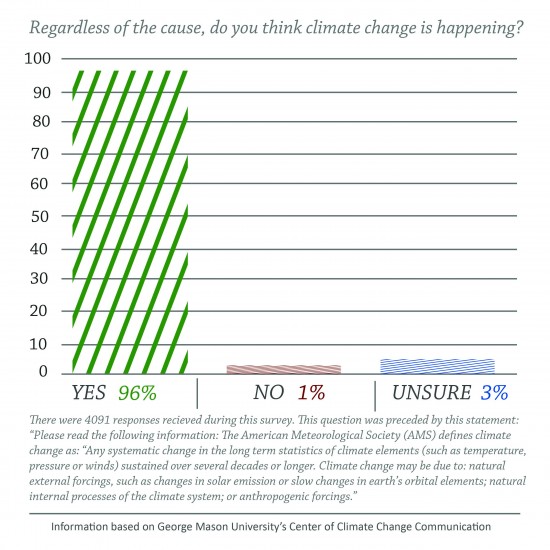 The American Meteorological Society (AMS) asked 4C to conduct a report surveying AMS members, including 1,038 professionals in the field of broadcast meteorology and 6,644 other professional, non-student AMS members. A total of 3,952 AMS members, including individuals both within the U.S. and abroad, completed the survey. Members were asked about their views on climate change, including their thoughts on its causes and how best to prevent further problems. (Megan Zendek/Fourth Estate)

The American Meteorological Society (AMS) asked 4C to conduct a report surveying AMS members, including 1,038 professionals in the field of broadcast meteorology and 6,644 other professional, non-student AMS members. A total of 3,952 AMS members, including individuals both within the U.S. and abroad, completed the survey. Members were asked about their views on climate change, including their thoughts on its causes and how best to prevent further problems.

4C is a research center that conducts unbiased social science research to educate the public on matters related to climate change. The center collaborates with other colleges and organizations at Mason to stabilize the planet’s life-sustaining climate by educating the community and conducting research.

With surprising reports circulating such as NASA and the National Oceanic Atmospheric Administration’s (NOAA) statement that 2015 was the hottest year on record since 1880 (when modern record-keeping began), the topic of climate change inevitably pops up in classes at Mason.

Edward Maibach, director of 4C, discussed his contribution to the issues as well as Mason’s role in educating students and facilitating action.

“Science is perfectly clear: humans caused climate change. [For] anybody who has a diverging opinion, I ask them to consider what the climate change scientists have to say,” Maibach said.

Maibach contributed to an article entitled “Development and Nationwide Scale-Up of Climate Matters, a Localized Climate Change Education Program Delivered by Broadcast Meteorologists,” which was recently accepted into the Oxford Research Encyclopedia of Climate Science. The article discusses the importance of effective communication and climate change curricula in supporting climate change education.

“I don’t personally know any professor who is an expert on climate change other than the fact I haven’t seen many professors having strong opinions against it. Our [professors’] areas of obligation depend on [our] areas of expertise,” Maibach said.

In addition, Maibach explained how he, as an educator in climate change communication, works to effectively educate students without over-influencing their opinions.

“On day one, my students are perfectly clear about what’s happening. We read the National Climate Assessment, and my students know my views on the topic. It’s a very serious topic and it’s happening here right now,” Maibach said.

The National Climate Assessment is a report produced by a team of over 300 experts from various federal agencies guided by a 60-member Federal Advisory Committee. The report is updated continuously, with the current report available to the public online.

Natalie Burls, assistant professor at the Center for Ocean-Land-Atmosphere Studies at Mason, researches how to improve the public’s understanding of the processes that determine Earth’s climate. She discussed her thoughts on the Mason community’s role in addressing climate change.

“Everyone that is climate-literate has a role to play in educating the community on climate change,” Burls said.

Furthermore, Burls proposed a potential way to stop or decrease the exponential rate at which Earth’s climate is currently changing. “We need to work on the technologies that will overcome our dependence on fossil fuels,” Burls said.

Although the 4C study found that most AMS members believe climate change is happening, it also reports that more than half of the members surveyed do not consider themselves experts in climate science. According to the survey, 57 percent of participants considered themselves non-experts in climate science, though 67 percent of participants said they believe humans are largely responsible for climate change.

Many students, like sophomore community health major Rezwana Khan, agree with these meteorologists, stating that climate change does exist and is currently happening.

“I think climate change is real. We may not see drastic changes right now but over time it will progress,” Khan said, adding that she thought this year’s early cherry blossom peak was an example of this progression.

Additionally, Khan stated that she believes more people are starting to accept that climate change is happening since temperatures seem to be varying more and more each year.

“Professors and faculty play a huge role as many of the student not only look up to them but form many of their ideas and thoughts based on what they are taught,” Hossain said.

He added that individuals that disagree with scientists all around the world should “open their eyes,” because the first step in solving a problem is recognizing that there is one.