This story was originally published in the April 18 issue of Fourth Estate. 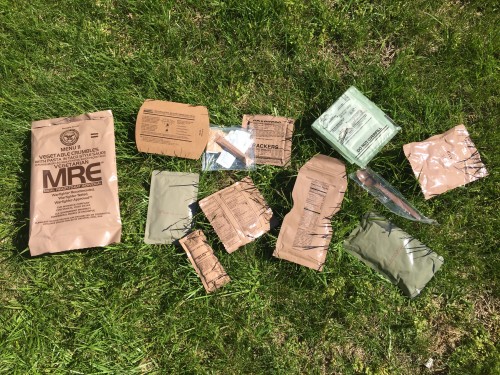 The contents of this Meal Ready to Eat (MRE) include “vegetarian crumbles with pasta in taco style sauce,” chocolate chip cookies and pears, among other snacks. The package also contains a plastic spoon and a raspberry flavored “beverage base.” (Ellen Glickman/Fourth Estate)

Though “Army food” is a mystery to most civilians, the Patriot Battalion became very familiar with military rations during their annual Joint Leadership Development exercise (JLDX) program at Fort AP Hill from April 7-10. The Patriot Battalion spent the entirety of the exercise in the field training, along with cadets from other universities, to enhance leadership skills, critical thinking and tactical strategies. The only foods available were whatever snacks cadets had squeezed into their packs before the trip as well as Meals Ready to Eat (MREs), which are military food rations.

When they were in the barracks for the night, cadets sat on the edges of their respective bunks and began investigating the contents of their MREs. A cadre member walked past drinking hot cocoa from the contents of a plastic bag. Another cadet squeezed something labeled “cheese spread” onto a cracker. Skeptical looks and hesitant questions passed through the barracks as the cadets settled in for dinner.

JLDX is a joint program between Mason’s Patriot Battalion, Howard University and the Hoya Battalion, which consists of cadets from American University, Georgetown University, George Washington University, the Catholic University of America and the Institute for World Politics. While nearly 300 cadets are completing their training in the field, the Reserved Officer’s Training Corps (ROTC) is responsible for making sure everyone is fed and fueled for operations. The cadets are provided with prepared MREs.

According to goarmy.com, MREs have been the army’s primary source of rations since 1980. An MRE consists of a main course, a side dish, crackers or bread with some sort of spread, dessert, candy, beverages and the necessary utensils to eat each meal. Each MRE contains an average of 1,250 calories.

“It’s not a gourmet meal, but some of them are better than others,” Hanna said. He described the pork sausage gravy as “the one no one wants to eat” but admitted that other meals are quite tasty. According to Hanna, two favorite entrees are chili with beans and spaghetti.

He continued to explain that while the contents of each MRE generally taste like what the label says they will, they may look quite different. Rice tastes like rice, but it is congealed into a block of rice rather than served as individual grains.

At JLDX, cadets are distributed MREs at random. After cadets dissect and assess each package, extensive trading takes place. Many cadets trade snacks they brought from home.

Cadets often get creative with the materials traded from other MRE packages. Cadet Sheila Pierre, a JLDX veteran from Howard, boasted her ability to combine elements from different MREs to make unique meals. Her favorite was spreading a tortilla with peanut butter and adding dried fruit. Other combinations included a makeshift peanut butter and jelly sandwich, mocha coffee and mashed potatoes spread on crackers.

MREs can be stored for months even in high temperatures, making them the most efficient fuel for soldiers overseas or out in the field, Hanna explained.

MREs also often include Flameless Ration Heaters. These heaters contain chemicals that react to the addition of water by creating heat. By pouring water into a sleeve containing the chemical heater and adding a sealed entrée, the hot water cooks the meal inside the still-sealed MRE.

Cadets were careful to pour water on unused heaters before disposing of them. If unused heaters are thrown in the trash, any liquids also in the trash can spill on the heater, initiating a chemical reaction that can generate enough heat to start a fire.

Luckily, such an accident did not occur at this year’s JLDX. Cadets consumed their MREs safely, if not enthusiastically.