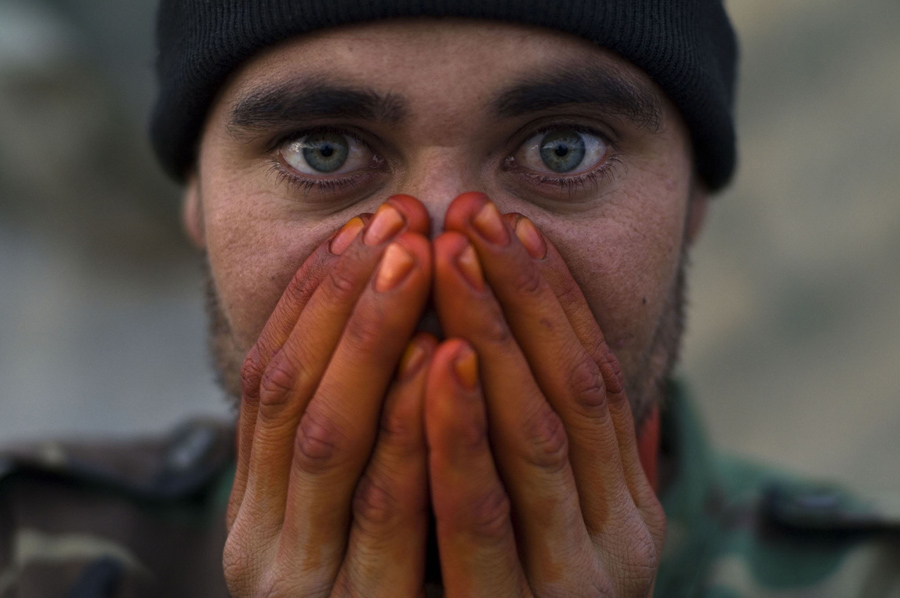 Many of today’s college students grew up hearing news stories about what was happening in Afghanistan, and today some of us are studying and building careers around international conflict. But what most of us won’t ever be able to understand is how war impacts people on a personal level. Mason held a film screening  of the documentary “Kandahar Journals,” an unconventional documentary that accomplishes just that by capturing a photojournalist’s first-hand experience of the war in Afghanistan.

Louie Palu is a Canadian photojournalist who covered the War in Afghanistan from 2006-2010. His work has been featured in numerous media outlets, including BBC, the New Yorker, the New York Times, TIME, Newsweek and the Washington Post. He received a Pulitzer award along with many others for his work. Aside from covering the War in Afghanistan, Palu has covered events in Guantanamo Bay, the Hard Rock Mines in Quebec and Ontario, the Mexican Drug War, and, when Fourth Estate spoke with him in February, he had just returned from a trip to the Ukraine.

“Kandahar Journals” tells a personal story through Palu’s journal entries and video footage from his time in Kandahar. The film documents both the tragedies and the silence of war. It also offers some light humor, including Palu’s hand-drawn geography lessons.

The film demonstrates the disconnect between politics and the intensity of war on a personal level. Over the course of the documentary, the war eventually transforms Palu, eventually becoming too violent for him to cover any longer. Palu says at the end of the film that it is impossible for photographs to convey the reality of war, which is a personal experience.

When he spoke at Mason in February, Palu said he wanted to tell a different story about war through his documentary. To him, most war documentaries look the same. “I think that there’s a lot of films about war that have made people feel comfortable about watching films about war,” Palu said.

One of the main themes he wanted audience members to take away from the film was the feeling of unfamiliarity.

“I wanted to make a war film very unfamiliar, actually,” Palu said. “I think there’s this thing where we’ve created war films that are perfect — the editing’s perfect, the lighting’s perfect, everything’s perfect. Whereas [in our movie] we kept as many of mistakes, [such as] fingers, in front of the lens, as possible because war is chaos.”

Sound was also used to create a sense of unfamiliarity. “I didn’t want any music to be in the film. So the music took you to a different place,” Palu said, adding that he thinks viewing “Kandahar Journals” should be a solemn experience. “I think what’s important is seeing the film in the theater. It’s a 76-minute commitment to being in the dark, turning your phone off, and focusing and meditating on this really important thing.”

Part of the point of the film’s tone was to catch viewers off-guard, just like war does to civilians.

Junior Hadeel Aradi, a student who attended the screening, thought the film told an important story about an under-discussed issue.

“I liked that the goal of the film was to show the audience that there are many casualties of war, including civilian casualties,” Aradi said. “It was telling a real story of war that is sometimes forgotten about in a very unique way. As the story was told, there was a lot of chaos and an unorganized plot which made it a very raw film leaving the audience with a lot of heavy emotions.”

Palu said he also wants the film to encourage viewers to question their preconceived understanding of war and culture.

“How do we understand war if we don’t expose ourselves to these dialogues?” Palu asked. “If I haven’t been to Iraq can I see a picture from Iraq and be like, ‘Oh I know what Iraq’s like. I know Baghdad I’ve seen, like, ten pictures.’ Those are pictures.”

He added that unique sensual experiences are key to understanding a culture. “A big thing in Kandahar is raisins in the rice. There’s a particular taste to that. If I have lamb in Kandahar it’s probably a lot different than the lamb in Turkey. … [It’s] how people speak, how people express themselves, how people host you, how you are as a guest,” Palu said.

For the film’s promotional picture, Palu chose a photo of an Afghan man cupping his hands to his face. To Palu, this photo represents one of the film’s key messages, “how we see and don’t see war.”

“It’s about confronting how we see things,” Palu explained. “The photograph is looking out at you, [but] you’re not looking into the photograph. … You confront this person, [but] you don’t know who he is or what it’s about.”

Palu first became interested in photojournalism when he read a book by Don McCullin, a photojournalist famous for photographing wars and poverty. McCullin worked for the Sunday Times, covering the Vietnam War, the African AIDS crisis, the 1956 Suez Canal crisis, among other events.

Looking back on his initial influences, however, Palu said he now realizes his desire to be a photojournalist stemmed from his parents, who shaped his understanding of identity.

“They were children in the Second World War, and they always sort of talked about the violence and fighting in the war,” Palu said. “I think that becoming a photographer and covering war helped me to understand their experience. It became a window into understanding who I am.”

Palu said he first became interested in documenting Afghanistan once his home country, Canada, a formerly neutral nation, involved itself in the war. In addition, he believed the events in Afghanistan warranted more attention.

“I felt like the war wasn’t really being covered, because most of the media had switched their attention to Iraq in 2006,” he said, adding that when the Taliban returned to Afghanistan “I really felt like it was a moment where I was at sort of the height of my abilities at the time.”

Palu was working for the Globe and Mail, a Canadian newspaper, when he decided to start photographing in Afghanistan.

“I quit my job, sold most of my stuff, and started going to Kandahar for these really long trips,” he said.

He late realized, however, that his decision to photograph Kandahar grew also from a desire to better understand his identity.

“People ask me why’d you go to Afghanistan, and I’d be like, ‘Oh, the story’s important!'” Palu said. “I had this copy-and-paste line most journalist use about why they do everything. But it really was [because] I wanted to understand my parents’ experience.”

Afghanistan reminded Palu of the memories his parents had shared with him about World War II.

“I would see young Afghan children and be like, ‘Hey, is that what my dad was like? Is this what his experience was like?’” Palu said. “And it felt really personal.”

Even today, six years after returning from Kandahar, Palu is still discovering more about his family’s experiences.

“My parents didn’t tell me much about [their experiences], only a little,” Palu said. “They only started telling me the real stories after I came back from Afghanistan. I’m like, ‘What? Some of my relatives were partisans who fought the Nazis!'”

Cynthia Fuchs, director of Film and Media Studies at Mason, said she thought the film brought a variety of people together and used photography to spark conversations.

“I’m hoping [the film] will initiate more discussions about other wars and also the functions of art, and what art can do,” Fuchs said. “I think it’s so effective. And it sort of alludes to questions about what are we doing as a national community, but also as people in a global community [to] initiate those discussions.”