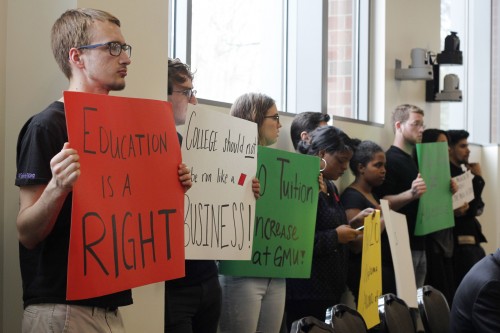 Members of GMU Student Power ask for a tuition freeze at the Board of Visitors meeting in Merten Hall on Thursday. (Amy Rose/Fourth Estate)

At the Board of Visitors meeting this past Thursday, members of GMU Student Power held a silent protest demanding a tuition freeze.

While the Finance and Land Use committee ate lunch and discussed a variety of topics — including university housing, the Virginia state budget and ongoing facilities projects — approximately 15 members of the student organization filed into the room and stood alongside the back wall, facing the committee. Each student held a sign, some of which read “Student Power #fightthehike,” “Education is a right” and “High tuition ≠ accessible.”

“We were protesting the cost of tuition at George Mason University, and we were trying to be preemptive in protesting any type of potential tuition increase,” said senior Samantha Parsons, president of GMU Student Power.

Rector Tom Davis briefly left his seat to invite the students to stay after the committee meeting and discuss the issue in more detail. Upon returning, he acknowledged their presence to the entire room.

“We appreciate you being here,” he said. He described the protestors as “ahead of the curve,” since the board is not discussing next year’s tuition until their next meeting.

The students remained in the Merten Hall room for roughly one hour then left to discuss a potential tuition hike with Rector Davis, Senior Vice President of Administration and Finance JJ Davis, Vice President of University Life Rose Pascarell and Student Body President Khushboo Bhatia, who is also a BOV student representative.

“Students’ perspectives are critically important in this discussion,” Senior VP Davis said. She said it is vital to continue to “find opportunities where the university can explain the complexity of the tuition process and understand what students needs and wants are.”

Senior VP Davis said previous opportunities for this conversation include the Student Government-sponsored tuition town hall, hosted by Senior VP Davis and Pascarell in early March, and the collaboration between administration and GMU Student Power to create a Stay Mason fund, an emergency resource for students who are no longer able to afford Mason tuition.

Parsons agreed the Stay Mason fund was an important success, but said GMU Student Power’s original name for the fund, Access Mason, was more aligned with the organization’s goals.

“Not only does a tuition increase affect students that are already at Mason, but it really…[decreases] the opportunities for graduating high schoolers to come to Mason,” Parsons said. “…“[Our goal is] kind of twofold — making sure students already at Mason can stay and also making our education at Mason more accessible to students who deserve it.”

Parsons said the student protest was a rare event.

“Oftentimes students don’t even know who the Board of Visitors are [or] when their meetings take place, and in reality they make a ton of the really important decisions that affect all of us,” Parsons said.

The next BOV meeting is scheduled for May 5 in Merten Hall, according to the BOV website.