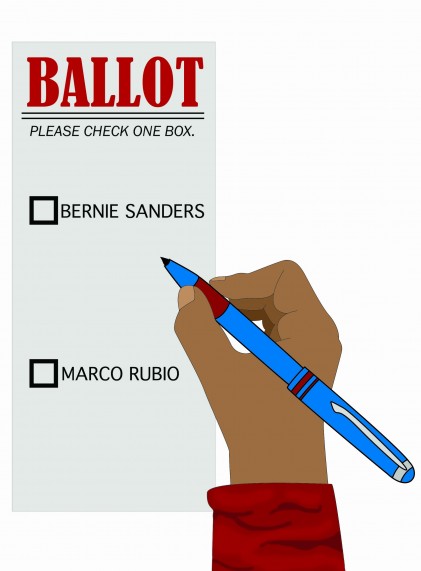 The George Mason Democrats recently published the results of a straw poll that asked students who they would vote for in the upcoming presidential election.

The winner for the Democratic ballot was Senator Bernie Sanders and Senator Marco Rubio won for the Republican ballot.

The poll was open in the Johnson Center from Jan. 18 to Feb. 5, and the results were published Feb. 7.

The results of the Republican portion of the straw poll listed Rubio winning with 32.7 percent of the vote, Senator Rand Paul coming in second with 18.2 percent, Senator Ted Cruz and Carly Fiorina tying for third with each receiving 9.1 percent of the votes and Donald Trump, Ben Carson and former Florida Governor Jeb Bush all tying for fourth place with 5.5 percent each. Ohio Governor John Kasich received no votes. Paul and Fiorina have since dropped out of the race.

The straw poll was conducted at Mason while Generation: Financial Knowledge Development (GenFKD) conducted its own study that found that 85 percent of millenials feel that the presidential candidates are ignoring them. GenFKD defines itself as “a peer-to-peer educational platform dedicated to informing college students and recent graduates about the economy, jobs and financial self-sufficiency.”

According to the study, millennials make up 36 percent of all eligible voters, “the largest generational bloc.” The study polled 782 adults across the United States between the ages of 18 and 34 in December 2015.

According to Joe Russell, co-president of the George Mason Democrats, their poll had been in the works since last April.

“This is something we’ve wanted to do for a long time,” Russell said. “We’ve had lots of discussion about presidential contests, and lots of people have asked me, when I talk with members of the Fairfax Democratic Community, … ‘Who does Mason support?’”

According to Russell, the organization was unsure as to how many students were going to participate in the study, but was pleased with the 288 participants.

“We know the average number of students who vote on campus ranges around 500, so we weren’t expecting thousands and thousands of people to participate in this,” Russell said.

Russell said that despite the snowstorm that kept people from filling out paper ballots for a week in the middle of the collection period, George Mason Democrats received a nearly even number of paper and online ballots. Russell added that he feels the results were indicative of the larger voting population.

Flynn said that initially, with the 17 GOP candidates running for president, there were some candidates who George Mason College Republicans felt did not address millennials’ concerns.  However, Flynn said he believes that Rubio and Ohio Governor John Kasich are listening to millennials and reaching out to the group, not only focusing on seniors and the middle class, as Flynn described Clinton as doing.

“We have some candidates, Marco Rubio, even John Kasich, who are seeking the millennial vote,” Flynn said.

He also added that Sanders has done a good job seeking millennial votes as well.

Both Flynn and the George Mason Democrats encouraged students to vote in the Virginia primaries. Students who are registered to vote on campus will be able to in Merten Hall on Mar. 1 between 6 a.m. and 7 p.m.

Let it go? How Mason decides to call a snow day