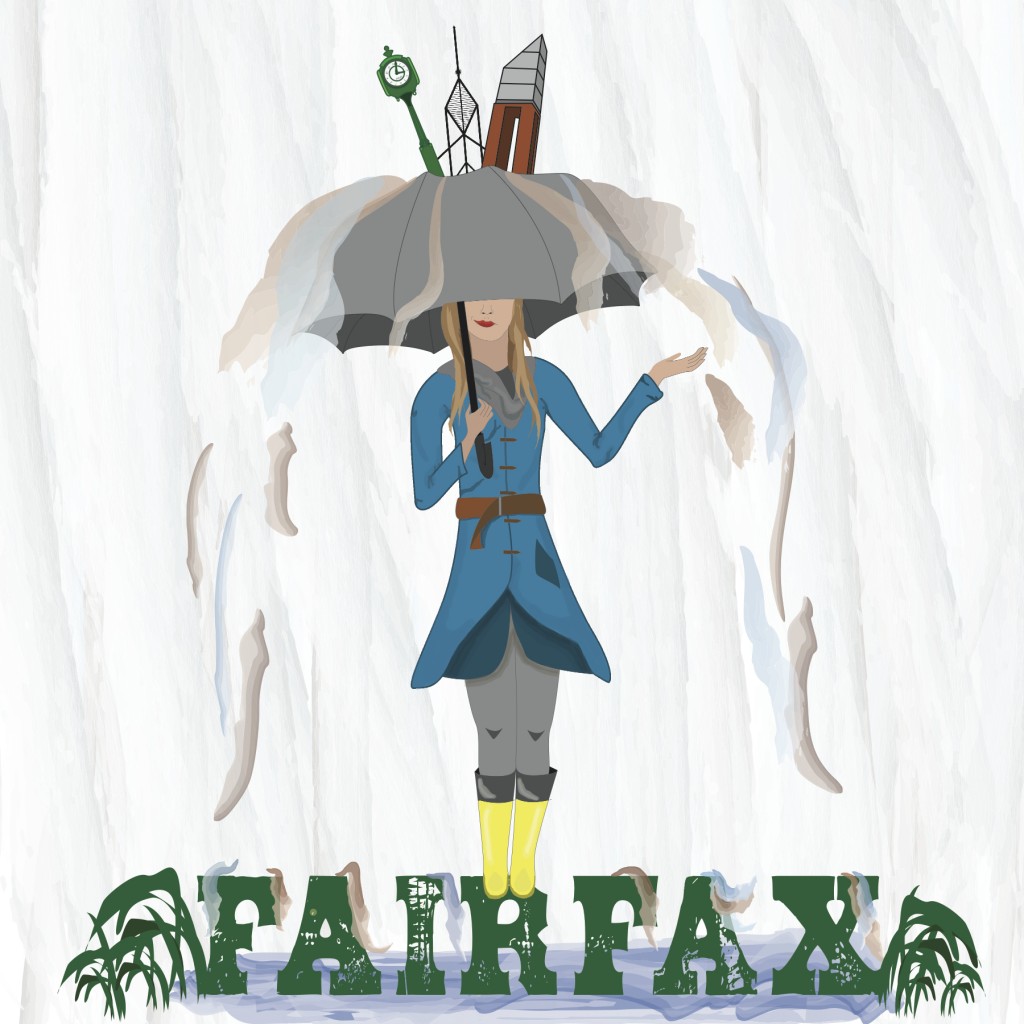 “If Mason’s trying to be a leader, it’s not being a leader in terms of sustainability of watersheds.” — Dr. Chris Jones, freshwater ecologist and Mason professor. (Megan Zendek/Fourth Estate)

When it comes to hydrological studies, Mason offers its students and faculty a unique living laboratory; the Fairfax campus functions as its own independent watershed.

According to Dr. Chris Jones, a freshwater ecologist and professor at Mason, “a watershed is an area of land that drains to a particular water body.”

For the Fairfax campus, that particular body of water is Mason Pond. All the rainfall that lands on campus drains to the pond as well as local streams. This means any runoff flowing downhill into these water bodies absorbs what is on campus — whether that be pollution or physical debris. Thus, the activity of campus has a direct impact on many surrounding streams, ponds and lakes.

Simply put by Dr. Jones, “water goes in a watershed, and as water goes through, that land is going to influence the quality and quantity of water.”

He said a healthy watershed is essential to sustaining human development, protecting ecosystems and ensuring that water sources can be utilized for years to come.

Mason Pond is not the only body of water that is effected by campus activity. West Campus and the area surrounding the Field House belong to another watershed that eventually drains to Pohick Creek. Also, much of Fairfax County drains to Lake Accotink. Though Mason Pond, Pohick Creek and Lake Accotink are each small watersheds, they also belong to the much larger Potomac Watershed that includes water sources from multiple states. 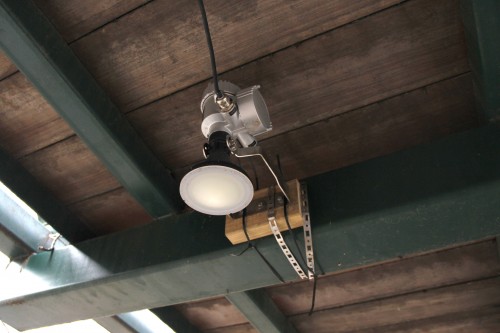 Students who work with the Mason Water Data Information System use “the bat” to collect data on a stream near Lot A. Like its furry namesake, this instrument emits sonar waves to measure the stream’s water level. (Amy Rose/Fourth Estate)

Mason’s unique ecological situation allows students to research watersheds by studying how their campus functions independently and how it impacts surrounding environments.

In recognition of this opportunity, Dr. Celso Ferreira, a professor at Mason whose research focuses on water resources and environmental engineering, created the Mason Water Data Information System (MWDIS) in the summer of 2013. This program is a collection of students and faculty working to collect hydrological data across Mason’s campus in hopes of understanding its role as an independent watershed. He said this program was created as a way to take advantage of the opportunity to gather quantifiable information on the Mason Watershed.

Under the Ferreira Research Project, a program created and directed by Ferreira to expand research opportunities to undergraduate students, Ferreira hopes to gather data through MWDIS that will “over time, be able to understand how positively or negatively Mason is affecting the watershed.” Data is collected on temperature, precipitation levels, wind speed, gust speed, pressure, relative humidity and dew point at various locations throughout campus. In order to study runoff patterns, students focus on temperature and water levels.

In addition to this final research goal, huge motivators behind MWDIS are the generation of watershed awareness and the production of educational research opportunities for students at Mason.

Ferreira hopes to “inspire as many students as we can to work with us.” This project is also meant to support generations of students that can “learn and improve and pick up where the last one left,” he said.

Until the fall of 2014, the information gleaned from the data collection sites could only be accessed by Mason students working on and maintaining each set of sensors on campus. Augusto da Silva and Angelita Barbosa Nunes, two undergraduate students who came to study at Mason from Brazil, designed an internet-based system that allows public access to the data collected on campus. This system allows other researchers to input independently collected data into the Mason system.

According to the program’s mission statement, this addition, “paved the way to efficient data sharing and discovery in the hydrological sciences.” This development also supports the research and education surrounding the Mason Watershed with historical, hydrological, atmospheric and water quality data from numerous projects on campus in addition to work completed by MWDIS. Individual data from each of the stations can be found at water.vse.gmu.edu.

The project is able to validate its own findings by cross-checking data at the multiple collection sites across campus. Shahriar Abdsharifabadi, an accelerated masters student working toward a career in water resource engineering, has been working with Ferreira since the fall 2015 semester to rejuvenate the project. In the spirit of the MWDIS, Abdsharifabadi has picked up where other students have left off and is working to validate past data and accurately collect new data.

According to Abdsharifabadi, the project is currently “not creating solutions to any possible problems, we are just trying to understand.” By studying the amount of precipitation falling on campus and following runoff patterns, Abdsharifabadi is attempting to “quantify a natural phenomenon” that is the Mason Watershed. Students like Abdsharifabadi also track every step of the water’s journey, from precipitation to runoff, to the Mason Pond and nearby streams.

Stream water levels are measured and collected by use of “the bat.” The bat is an instrument that clings to the underside of a bridge above a stream behind the Engineering Building. Using sonar waves like the ones produced by its furry namesake, the device is able to determine the water level. The bat can calculate its distance from the water’s surface based on how long it takes the sonar wave to bounce back to the device. Abdsharifabadi said this calculation helps determine the volume of water flowing through the stream at any given time.

Abdsharifabadi said he spends much of his time making sure the data collected is accurate.

“If you don’t have good data, a model is as useless as candy crush on your phone,” Abdsharifabadi said.

He explained that if the data collected over the last three years is not consistently collected and quantified, then any hydrological models completed on Mason’s campus cannot be accurately applied to other watersheds and lose their scientific value. If these models cannot be accurately designed, then the scientific community loses the opportunity to take advantage of Mason’s unique ecology that makes it so optimal for watershed research.

Eventually, Ferreira, Abdsharifabadi and the other students working on MWDIS hope to apply their findings in order to expand data collection into the Potomac region. Ferreira hopes these findings can be used to reduce risks of flooding, decrease pollutant runoff and design housing and development to protect the health of these surrounding watersheds.

Mason’s impacts on its watershed 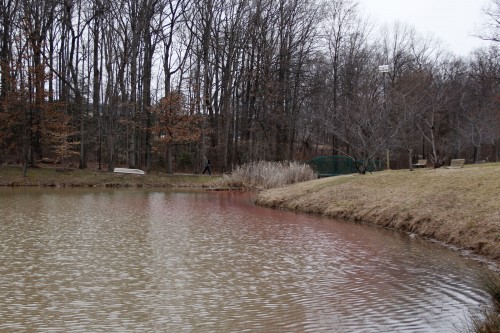 The Fairfax campus is its own watershed. This means all the rainfall that lands on campus drains to Mason Pond and other nearby streams. (Amy Rose/Fourth Estate)

Jones feels that although Mason’s watershed education practices are improving over time, this is not necessarily reflected in the physical aspects of its campus. He said the newest construction taking place behind Merten Hall is effectively burying the headwaters of the Mason Watershed. Headwaters are the areas where water from a wide area of land begins to gather and feed a watershed. By adding construction to this area, Mason is altering its watershed irreversibly, according to Jones.

“If Mason’s trying to be a leader, it’s not being a leader in terms of sustainability of watersheds,” Jones said.

In his extensive work collecting water samples downstream of Mason, Jones has noticed trends of decreased organism diversity. Jones said by looking at the diversity of organisms found in a stream, researchers can estimate the health of the water body. Any insect larvae found in the water “have to withstand the range of conditions over time,” and are therefore an indicator of how stable the water source is, Jones said. If streams only contain very adaptable insects, then the water quality is expected to be very low, but if more sensitive creatures are able to also survive, then the body must be relatively healthy.

Jones also commented on the impact Mason is having on the stability of stream banks. A bank well-colonized with vegetation growth is less susceptible to erosion and acts as a natural filter for runoff, and is therefore an important indicator of health for any body of water. He said this is one of the largest issues with bodies of water in Northern Virginia. More often than not, bodies of water are surrounded by impervious surfaces such as pavement and asphalt parking lots.

Professor Andrew Wingfield, who teaches creative writing and sustainability, commented on the intangible values of a watershed to its respective community. In terms of water body management, Wingfield feels that “if access is lost, there is a loss to the community.”

Wingfield said human developments are designed around watersheds, and this is an indicator of water’s centrality to societies, from subsistence, spiritual and aesthetic perspectives.

Wingfield said the Fairfax campus is unique because the features of its watershed are so visibly apparent. Students and faculty must cross bridges that pass over the two streams on campus, and the university’s storm water retention pond, aka Mason Pond, has become a campus landmark.

Wingfield also said this pond reflects a promising trend in terms of Mason’s watershed involvement. Although the pond has been used for years as an inviting highlight in Mason’s brochures, it is now gaining attention for its poor ecological health. Wingfield feels that a “more rigorous intellectual engagement with the watershed has developed” in the years since he first came to Mason.

Mason’s position as a “transitioning landscape,” as Wingfield mentioned, can negatively impact hydrology patterns and ecosystems downstream. Altering the surrounding geography can increase the volume and speed that runoff travels. Changes to surrounding areas also influence the particles that are picked up by runoff and eventually wind up in these water bodies.

“Excess nitrogen and phosphorous leaves the lawn because it’s not needed, and it winds up in streams,” Jones said.

Other substances found in developed areas, such as oil leaking from cars and the salt laid down to prevent snow accumulation, are all similarly carried downstream. These particulates can cloud water sources, alter the ecology of the water and disrupt the balance of delicate ecosystems.

Mason has been “replacing groves of trees with buildings and roads and lawns” over time, Wingfield explained.

Wingfield recognizes that Mason cannot stop developing and expanding. However, he feels as an institution of higher education, Mason has a responsibility to create an environment based upon learning and sustainable education.

“The environment we create is a reflection of our values,” he said.

My $5 trip to Harry Potter World via Starbucks