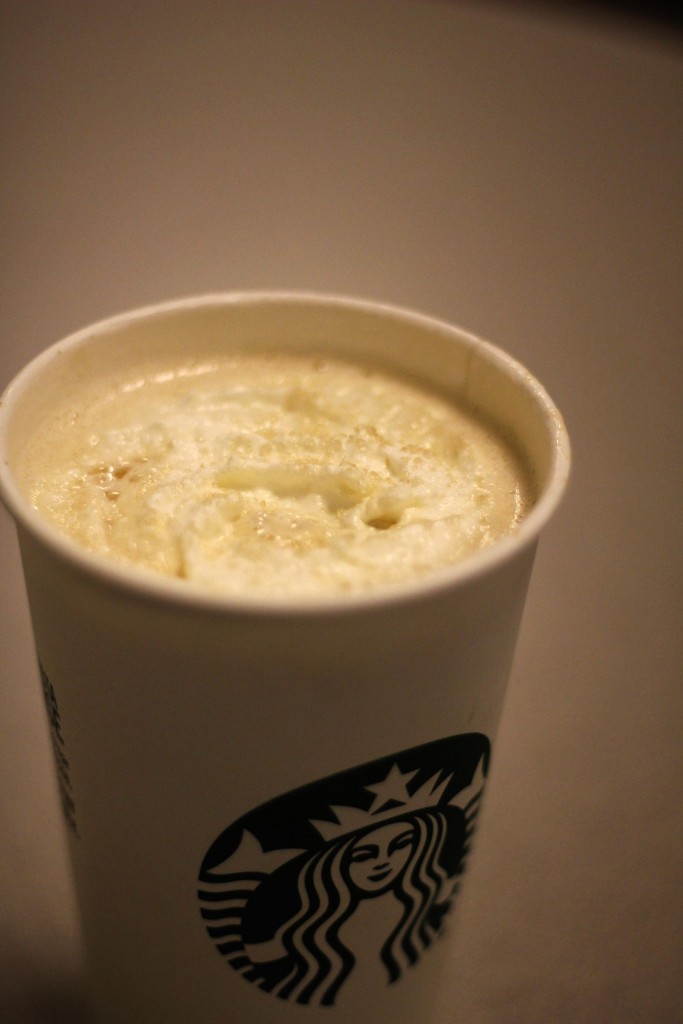 Hey, all you Starbucks lovers out there! Missing your Pumpkin Spice Latte? Starbucks has a new drink on their menu called the Smoked Butterscotch Latte (SBL). Starbucks says the SBL consists of “espresso with steamed milk and smoked butterscotch sauce, finished with a sprinkling of smoky butterscotch topping.”  This new season favorite will be available at Starbucks through March 21.

Many are saying that the SBL reminds them of Butterbeer, a drink mentioned in the “Harry Potter” books and now served at the Wizarding World of Harry Potter in Orlando, Fla. But does the latte live up to the hype?

As both a “Harry Potter” and Starbucks fan, I decided to try out the latest addition to the Starbucks menu to find out.

My initial reaction to the announcement of the drink was that it might be sickeningly sweet. However, the SBL showing up in my Facebook newsfeed with positive reviews. I felt like Facebook was trying to tell me that I needed to get in my car and drive over to the nearest Starbucks as soon as possible.

My friends also had good things to say about the drink. On one occasion, I was out at dinner with a friend when she mentioned she had tried the SBL and loved it. “It tastes like what you would think Harry Potter Butterbeer would,” my friend, Mason junior and conflict analysis and resolution major, Ashley Buttaro said.

Buttaro said the latte, despite its limited presence on Starbucks’ menu, would replace her usual order. “It was very smoky, but my boyfriend suggested I try it. You definitely have to be in the mood to order it,” she said.

Starbucks is known for their limited edition drinks offered around holidays such as Valentine’s Day, Halloween and Christmas. The drinks are widely popular on social media, which prompts many people to test them out on their own Starbucks runs.

Others I spoke to about the drink were less enthusiastic. Senior communication major Tod Mohney disagreed with Buttaro’s description.“Overall I enjoyed it and would probably get it again. I couldn’t taste a smoky flavor because the butterscotch flavor was so strong,” Mohney said. “The butterscotch is powerful and you can’t really taste the coffee. The smoky description throws me off and might make people not want to try the latte.”

My impression after finally trying the SBL for myself was that it was not as sweet as I expected it to be. In fact, I thought it had the right amount of sweet, butterscotch flavor. The latte was smooth going down, and only had a hint of a coffee flavoring.

Nevertheless, I was dismayed to learn of the amount of sugar in the SBL. According to Starbucks’ nutritional information, a grande SBL contains 350 calories, 14 grams of fat and a whopping 41 grams of sugar.

Another student I spoke to, junior communication major Kassandra Gardner, said she works at an off-campus Starbucks and got to try the SBL as part of her job. “All the baristas try the new drinks when they are released. We get to decide if we want to try it hot, over ice or as a Frappuccino,” Gardner said. “A few of the baristas compared the latte to a hard butterscotch candy.”

Gardner said the drinks are flying out the doors, but primarily to an older crowd. “The smoky flavor comes from the sprinkles added on top of the drink, so the flavor will vary depending on how much is put in,” she said.

Overall, I think the SBL is worth a try–despite their questionable nutritional value. A trip to the Wizarding World of Harry Potter is expensive, but a Smoked Butterscotch Latte from Starbucks is a great $5 alternative. Close your eyes, and you might forget that you’re in Fairfax and not Hogsmeade.

Getting to know Otis Livingston II