A little bit of imagination mixed with adventure and a longing to never grow up are exactly what students will experience this weekend if they attend Mason Players’ “Peter Pan: The Boy Who Hated Mothers.”

Taking place in TheatreSpace on Thursday, Nov. 19, and Friday, Nov. 20, “Pan” will bring one of students’ most beloved childhood characters, Peter Pan, to life.

This play isn’t the 1953 Disney classic most are familiar with, though, according to junior Jessica Dubish, who directed the play. Rather, “Pan” draws from the original character of Peter Pan as conceived by author and playwright J.M. Barrie in his 1902 novel, “Little White Bird.”

“This is ‘Peter Pan’ as you have never seen it before but how it was always meant to be told,” Dubish said. “This latest version of Peter Pan is an examination of the psyche of a child, both a child’s dream and nightmare played out at the same time, [and is a way] for both children and adults to explore the pain and inevitability of growing up.”

Ben Peter, a sophomore theater major, will be playing the role of Peter Pan in this weekend’s performance. Peter describes this version of the play, which playwright Michael Lluberes based off of Barrie’s novel, as dark yet authentic. “While this show has been referred to as a “dark” twist on Peter Pan, it is arguably one of the truest adaptations to J.M. Barrie’s original works,” Peter said. “It offers a more psychological approach to the story’s main theme of the pain of growing up. It also incorporates themes that seem to have been inspired by events in Barrie’s own life, such as grief and coping with loss.”

MacKenzie Cahill, a freshman theater major, will be playing three characters: Nibs, Bill Jukes and Tiger Lily. Cahill explained that the performance will provide a glimpse into the minds of children and how they handle some of life’s heavier topics. “The audience can definitely expect to see Peter Pan retold in a darker light,” Cahill said. “’Peter Pan: The Boy Who Hated Mothers’ keeps with J.M. Barrie’s original intentions of the concept of a boy who can’t grow up, while also blurring the lines of what is real and what is make-believe. They [viewers] should not only be prepared for sword fights, fairies, and Indians but also the importance of family, the loss of loved ones and the difficulties of childhood.”

Cahill said college-age attendees will be especially able to relate to the play’s discussion of growing up and leaving the shelter of home, explaining that “Pan” has allowed her to reflect on both of these topics, which have been close to her heart since childhood.

“The concept of never growing up was as relatable to me then as it is now,” Cahill said. “I remember watching Peter Pan and wanting to fly away with him to explore the Neverland and play make believe forever.” Cahill said. “With the recent threat of adulthood hanging over my head, I have found myself once again drawn to the enigma that is Peter Pan. I have been incredibly blessed to be a little kid again, at least for a few hours, and rediscover the innocence I once had and am currently desperate to return to.”

The rehearsals for “Pan” included childhood games as well as vocal and movement training while in character to bring out each actor’s inner child.‪ “As a company we’ve worked together to imagine this world and to recreate the feeling of playing make-believe as a child,” Dubish said.

The cast of the play enjoyed these special preparation methods. “Our director, Jessica Dubish, made it very clear from the beginning of the rehearsal process that there would be an emphasis on play,” Peter said. “We dedicated a lot of time to exploring the space and our characters through movement and games. This led to our cast bonding very quickly, and I believe we all discovered invaluable things about our characters.”

Cahill agreed, saying that the method was a way for actors to let loose while forming deeper understandings of their characters. “This had to be the most fun rehearsal process I’ve ever been a part of. Jessica gave us the freedom to explore new things and allowed us to develop our own interpretation of who Peter Pan really was,” Cahill said.

According to Cahill, Dubish has put considerable thought and effort into the show. “She [Dubin] spent years researching J.M. Barrie and different versions of the story, so she brought in so much insight, drive, and passion to create an entirely different take on ‘Peter Pan,'” Cahill said.

Dubish has been infatuated with the story of Peter Pan since she was young, so when the opportunity to direct “Peter Pan: The Boy Who Hated Mothers” came along, she took it and ran. “I was eight years old when my fascination with Peter Pan took flight,” Dubish said. “My parents bought me a copy of the 2003 film ‘Peter Pan,’ directed by P.J. Hogan, and ever since then, I’ve been ‘hooked’ on all things Peter Pan and J.M. Barrie. I would watch this film at least three times a day for the duration of my childhood. The stories of Peter Pan inspired hundreds of hours’ worth of make-believe and imaginative play for my younger self. It was this playtime that inspired me to propose this show.”

The cast has seen Dubish’s passion for making the show the best it can be and encourages audience members to take this into consideration. “Everyone interested in coming to see our version of Peter pan should know that our director, Jessica Dubish, put her heart and soul into this piece, and I am honored to say that I was a part of it,” Cahill said. “Her love of J.M. Barrie and of all things Peter Pan is incredibly inspiring and her presence is as tangible as the actors are onstage.”

The cast and crew have also fallen in love with the concept of “Pan.” “This show is a passion project,” Peter said. “Everyone involved poured love and dedication into this production and I believe it shows.”

Peter also had a connection when he was young to the boy who never wanted to grow up and is eager to portray his childhood hero. “Growing up, the idea of a boy who never grew old and could fly captivated me,” Peter said. “Mostly the bit about flying. I would often pretend fly around the playground with my friends after school, and to have the opportunity to bring the character to life onstage is an honor.”

Audience members will journey into the magical world of the Darlings’ nursery and escape into the minds of their childhood-selves for two hours.

“We are asking a lot from our attendees in terms of suspension of disbelief, but if the audience is willing to step into the nursery and play with us, this show can be a magical shared experience,” Peter said. “This play shows us that children are more perceptive to the world around them then adults may realize.”

Dubish is excited for audience members to get the full experience of Peter Pan’s world and is especially eager to see the hard work of the cast and crew pay off.

“I invite audiences to not only sit back and enjoy the show, but to use their imaginations with us as we take them on a voyage through the mind of a child; full of zigzag lines leading to islands, savages and gnomes, first of school and religion, and so much more,” Dubish said. 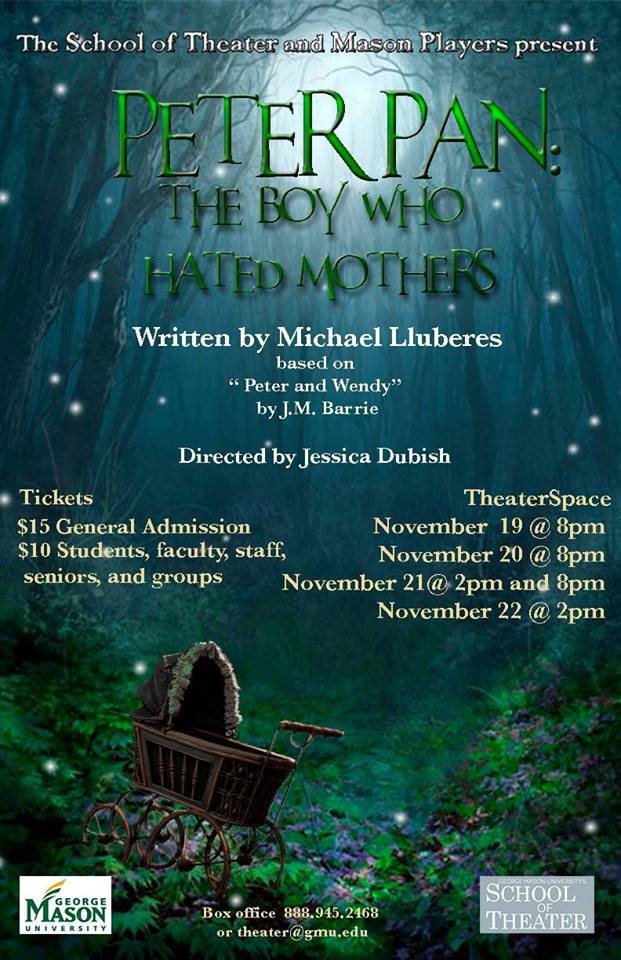