The Campus Drive entrance to George Mason University opened Saturday, April 19 with a ceremony that gave awards to several members of the Mason and the Fairfax communities for their participation in the project.

“This campus, in our mindset, was a little bit like Siberia. If you had anything happening out here, it was a hike, and it was not a very safe hike to get here,” stated university President Angel Cabrera, who presided over the ceremony. “Now the community can safely come to all the events. And it opens up all sorts of opportunities for the campus in the future.”

“It was nice seeing students leisurely walk across the path, as opposed to sprinting across [Route] 123 and University Drive,” said Bulova.

Cabrera also said that the new road will even help with parking all over campus. 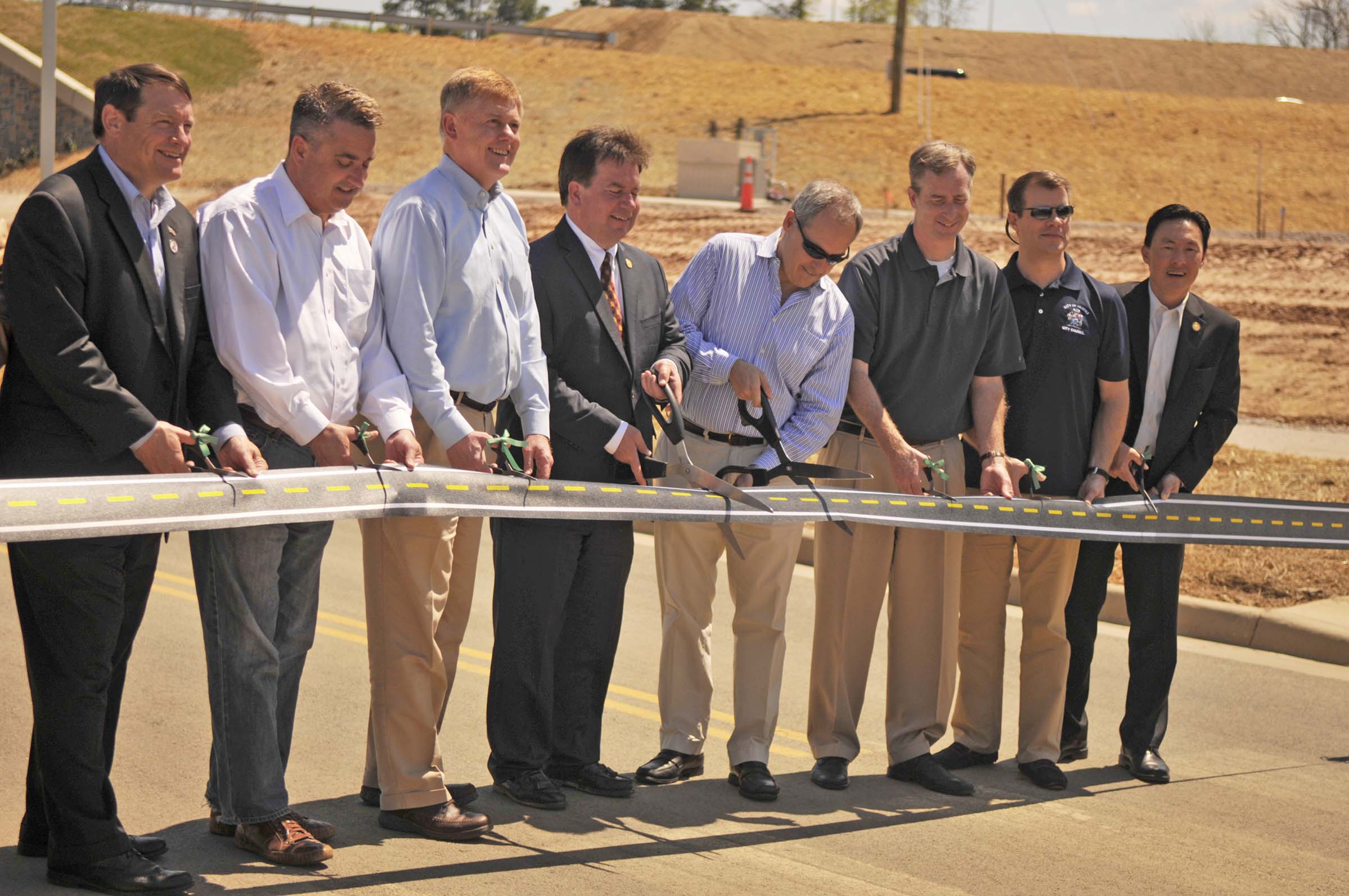 “It will also help traffic patterns for all the residents in our community. In fact, one of the biggest issues we have on campus at times is parking, and some of our lowest cost parking opportunities are on this side of campus, which after tomorrow will become a little bit closer for people to utilize. There is tremendous benefit from this construction project,” stated Cabrera.

“This is such an important project. It brings both sides of the campuses together; it will relieve some of the congestion, especially during peak hours and during events on Route 123 and Braddock Road,” Bulova said.

“It’s really been exiting to have been a part of this from beginning to end,” said Calhoun.

Construction of the road was delayed as it was originally scheduled to open at the beginning of the Spring 2015 semester. The university cited weather as the reasoning behind the delays.

The Jack Wood awards can be given to a group, an individual or an organization. The awards are named after the former mayor of Fairfax who originally arranged for land to be set aside adjacent to the town of Fairfax for a university and also began a Town Gown relationship for the university with the surrounding Fairfax area in 1959.

Executive Director of Community and Local Government Relations and Government and Community Relations Traci Kendall played a large part in the project.

“The Jack Wood Awards and the Campus Drive grand opening have one thing in common: they represent successful Town Gown relations,” said Kendall. “A relationship between a university and it’s surrounding community is mutually beneficial. It promotes creative ways for towns and universities to collaborate, including maximizing financial and capital resources, economic develop, quality of life opportunities, student community service and workforce development opportunities, and shared transportation and land use.”

Kendall said that there might be some lane closures to work on beautification of the road but otherwise, it is complete.

Fuller is an economist who studies the economics of the Northern Virginia, D.C. and Maryland areas.

“For 23 years he’s been working at Mason, trying to understand better than anyone the economy of our region,” stated Cabrera. “He has done extremely important pieces of work that has influenced policy in many ways.”

Fairfax Spotlight of the Arts is a local nonprofit organization that hosts a three-week arts festival in Oldtown Fairfax, and is a collaboration between the Fairfax arts community and Mason.

The #VisionFairfaxMason award was received by the Director of Campus Planning Cathy Wolfe and Brooke Hardman, Planning Division Chief for the City of Fairfax.

“Cathy and Brooke were instrumental in organizing a visioning exercise that brought together the university and city communities to discuss short and long term goals and possibilities for downtown Fairfax and Mason’s campus,” stated Cabrera.

Cabrera cited Hugo as “one of the main reasons” for the ceremony. Hugo, whose district borders Mason, played an instrumental role in securing the $15 million dollars in funding

for the campus drive project.

“We are very appreciative for all that he has done to help bring the Campus Drive project to fruition,” said Cabrera.

Hugo, who referred to Mason as “the crown jewel of Northern Virginia,” said that the Campus Drive project was both a way to alleviate traffic for Fairfax residents while still benefitting the university.

The Campus Drive entrance was open to students immediately after the ceremony.