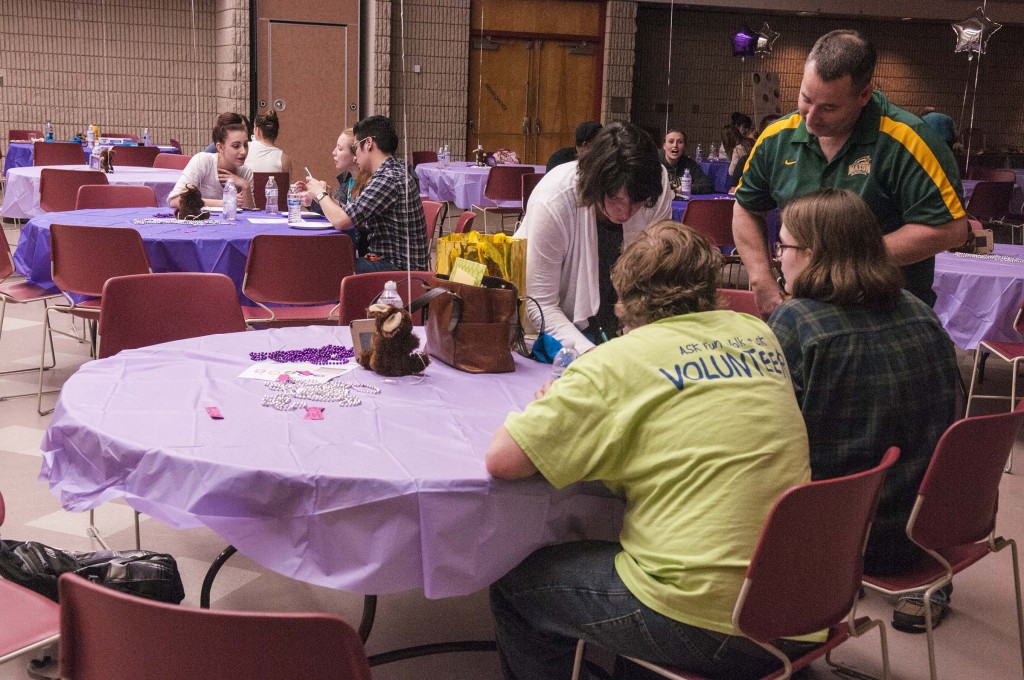 The Banquet for Babies was held last week to raise awareness and to fund the organization, March of Dimes.

According to their website, the March of Dimes works to “help moms have full-term pregnancies and research the problems that threaten the health of babies.”

“I think it’s a wonderful non-profit that, although they do research for premature birth defects, it’s for the health of all the babies and I think that is wonderful, that’s great.” Juliane Veloso, sophomore and president of Phi Beta Lambda, said.

PBL’s national charity partner is the March of Dimes. The student business group teamed up with the SAIL Office to host the event.

Sam McCurry, freshman and March of Dimes outreach chair, however was the leading person in getting Banquet for Babies up in running for the first time this year. She had wanted to plan Banquet for Babies while in high school, but had never had the opportunity or time to do.

McCurry’s connection to March of Dimes comes from a more personal place than just being the outreach chair in GMU PBL. She was born with a duodenal obstruction, which means that food could not reach her digestive track. Even more so, her brother born 18 months later, was born premature.

With March of Dimes past research, the group was able to save McCurry’s life.

“Their research saved my life, without them, the research of the March of Dimes I would probably not be with you guys today,” McCurry said.

Banquet for Babies had Mason DanceWorks and GMUnit perform along with an ambassador family, the Heards, to tell their story and experience with March of Dimes.

“We do a lot with March of Dimes, a lot of events with funding, awareness and raising money as well,” Greg Heard said.

The Heards brought their two sons, Luke, seven, a full-term baby, and Cody who was born along with his identical twin Dalton at 24 weeks.

The Heards spent a lot of the time in the NICU, which is where they connected with March of Dimes. Georgie Heard described the many times that she was sitting crying after Dalton had passed or Cody was in the NICU, and a March of Dimes worker would come over to her and comfort her.

“Sometimes that made the world of difference because, you are very isolated, even though you are going through this, there is people all around you, there are other families, you are in a hospital, but you feel very alone,” she said.

It made Georgie feel like she had someone to turn to.

At hospitals, The March of Dimes hosted events like pizza lunches, free of charge making it easy for parents to stay close to their children. ,

“They do the little things that I think, make a world of difference when you are going through such trauma,” Georgie Heard said.

After the March of Dimes helped them out, they in turn got involved with the organization to help other parents that were going through similar experiences. They have developed a tent for the March of Dimes Walk called “Place to Remember” to honor those babies that have pasted away.

Locally, they are a part of the parent advisory board and preemie groups at the Fairfax County Hospital. They have also created an indicator system for nurses when there is a loss of a twins or triplets. On their boards there are now butterfly magnets to indicate the number of children who died.

“One of the things when you are in the NICU, every day you may have a different nurse. So having the butterfly up there is an indicator to the nurse that there is a loss here and be careful what you say and what you do,”Greg Heard said. “That was kind of initiated through our March of Dimes in Fairfax hospital and it went through all the Fairfax system hospitals.”

McCurry hopes to see the event happen again next year.

“They are a great organization and I think it’s a shame that a lot of kids our age don’t know about them, because even though it may not directly affect us right now, it could affect us in the future and they don’t just work for premature babies and babies who are already sick. They work for all babies and that’s healthy and sick” she said.

Students can now take a ride on Campus Drive