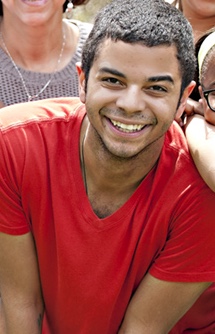 There are few teachers that invest so much of themselves into their student’s well-being.

Donovan Hall is a graduate teaching assistant at George Mason University looking for ways to improve kid’s lives from kindergarten to college freshmen.

“I am passionate about empowering youth to see the potential in themselves,” Hall said. “I think it is really important to teach students of all age to seek self-approval before seeking approval from others.”

“I think it has [made] my future more clear, like, I’m more motivated to do what I want to do. I’m more aware of my strengths and my passions,” Jacqueline Reed, cornerstone student and communication major, said. “The classroom setting is very open-ended because there is a lot of people coming from different backgrounds and perspectives on life, so leaving it open ended and leaving the class kind of having an underlying theme of being very optimistic and very motivated to do what they want to do.”

Hall uses his theatre practices to try to empower the current freshman students as they transition into college.

“I think what the main purpose of this class is for each individual person to be able to grow into themselves,” Tana McDonald, Criminology Major and Cornerstone student, said. “And to hopefully find a piece of who they are in the end of the class.”

From a very early age, Hall felt like he needed to be perfect for his mother. He was the one that always got good grades, he was first chair viola and he was the one that would go party with his friends, like a normal student. He also had depression.

“I did all of those things that you were supposed to do,” Hall says. “But I just never was connected with myself, and I never really understood how to take care of myself or what I needed.”

When Hall entered college, he still did not really know how to take care of himself. In the first couple of years, he turned to alcohol and partying because he thought those were the correct things to do based on the actions of students around him.

“My depression got so bad and I suffered from suicidal thoughts,” Hall said. “And at one point I didn’t know who I was and I hated my life so much and I was so tired of not being me, that I wanted to take my life.”

However, Hall says that he got a wake up call.

“One of my friends committed suicide before I had planned on doing it and I got a really big wake up call and I saw the hurt and the pain and the confusion that my friends were going through without them knowing that I was going through the same thing,” Hall said.

Hall began reading books on positivity and gratitude. Then he that there was a need to to teach this to others, and thus he decided to fill that gap.

“Kids are hurting themselves, they’re hurting other kids. They’re killing themselves at an earlier and earlier age because we’re just bombarded with so much information on what we’re supposed to be and who we’re supposed to be,” Hall said. “And none of that revolves around you finding that out for yourself or you really taking the time to get to know ‘Why does this upset me? Why does this make me happy? What are the things I love in life? What are the things I want to turn away from?’”

That’s when he came up with the idea for a children’s book.

Along with the books, Hall is designing positivity curriculums for students of all ages. He is currently experimenting with some of the activities for college students.

Reed explains that “these activities, though they are so simple and intended for a different audience, he still uses them and we still learn a lot from them.”

In the future, he said that he would like to do more research into positive psychology and children.

However, in the immediate future his “big plan is to be happy” and walk his dog and “find love and all those things that I’ve put aside for all these years to make other people happy.”

No swiping for students with new Mason ID

OPINION: The price tag of birthright