The Mason Inn is no more, and the Global Center has taken its place.

June 17 marked the last day for the financially weak Mason Inn, and construction on the new center began Aug. 11.

252 students currently live in the Global Center, representing countries such as China, Saudi Arabia and South Korea. The international students share the building with Mason students in the Global Crossings Living and Learning Community. The rooms are all doubles with one bathroom each and standard campus dorm furniture.

Daniella Beck, a sophomore and Global Affairs major, is one of the two Global Studies LLC RAs living at the Global Center.

“All my residents get along really well,” Beck said. “They’ve already started talking about community building and cultural things because even the domestic students bring cultural experiences. A lot of them have already studied abroad in high school or have traveled a lot.”

Lindsay Kenton, the INTO Mason external marketing & communications coordinator, explained the process of pairing together roommates within the Global Center.

“In this case, the roommates are very intentional. We’re trying not to place, for instance, two Chinese students in a room together because then they’re just going to speak Mandarin and they won’t learn English,” Kenton said. “That is why we require undergraduates to live on campus because we want people to practice the language that they’re here to learn.”

Some of the international students are part of the Academic English program and are only attending Mason to learn English. Others are in the Pathway undergraduate or graduate program for either one or two semesters.

“Pathway programs are for students that have a higher level of English than Academic English, but who need more academic preparation,” Kenton said. “They just aren’t eligible for direct admission because of the language course. They want a degree, they want to go to Mason, so that’s what this program allows them to do.”

By living with international students, Beck has found new ways to effectively communicate with her residents and work around their language barriers.

“It’s a lot of rewording things,” Beck said. “Like instead of saying the word ‘laundry,’ you want to say ‘washing clothes’ or ‘cleaning clothes.’ It’s finding new ways to say things, just having patience and realizing that it’s not a difference in smarts, it’s a difference in language.”

However, no matter what program the students are involved in, they all have access to the Office of International Program and Services, which is where they can ask questions about their student visas or other immigration concerns.

Along with changing the bedrooms, the building also reconstructed the hotel bar and restaurant into a student dining hall called the Globe.

The hotel bar has become became a coffee shop with a connected outdoor seating space. Remnants of the old bar are apparent with black and white photos of the campus and Washington, D.C. hung up along the walls. Students and faculty need a meal plan to purchase items from the coffee shop as the rest of the dining hall is accessible through it.

“We definitely are making an effort to put an international flair. On our salad bar, there’s always going to be a flavor of hummus, along with chips,” Van Slyke said. “We’ve been doing a lot of Asian-inspired as well as Indian-inspired menus, some Mediterranean.”

Javier Loayza, the chef manager for the Globe, said that even its staff is international.

“It’s a totally different dynamic than other dining facilities here. In each unit we have a palette of color and nationality,” Loayza said.

Javier is Peruvian and is planning to bring a taste of his national cuisine to the Globe: a natural drink made from lime juice, sugar, and pineapple.

“We hope that the Mason Global Center will be that international hub for the campus and that people will come up and get to know students, get to know what these programs will do for the university and be part of this important institutional transition,” Kenton said. 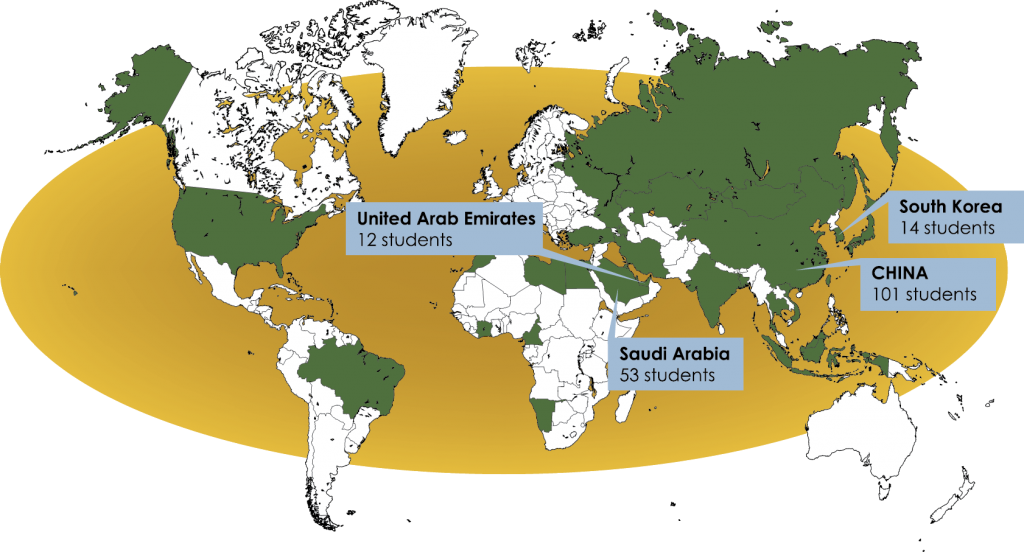 Where are INTO international students from?
Graphics Credit: Walter Martinez