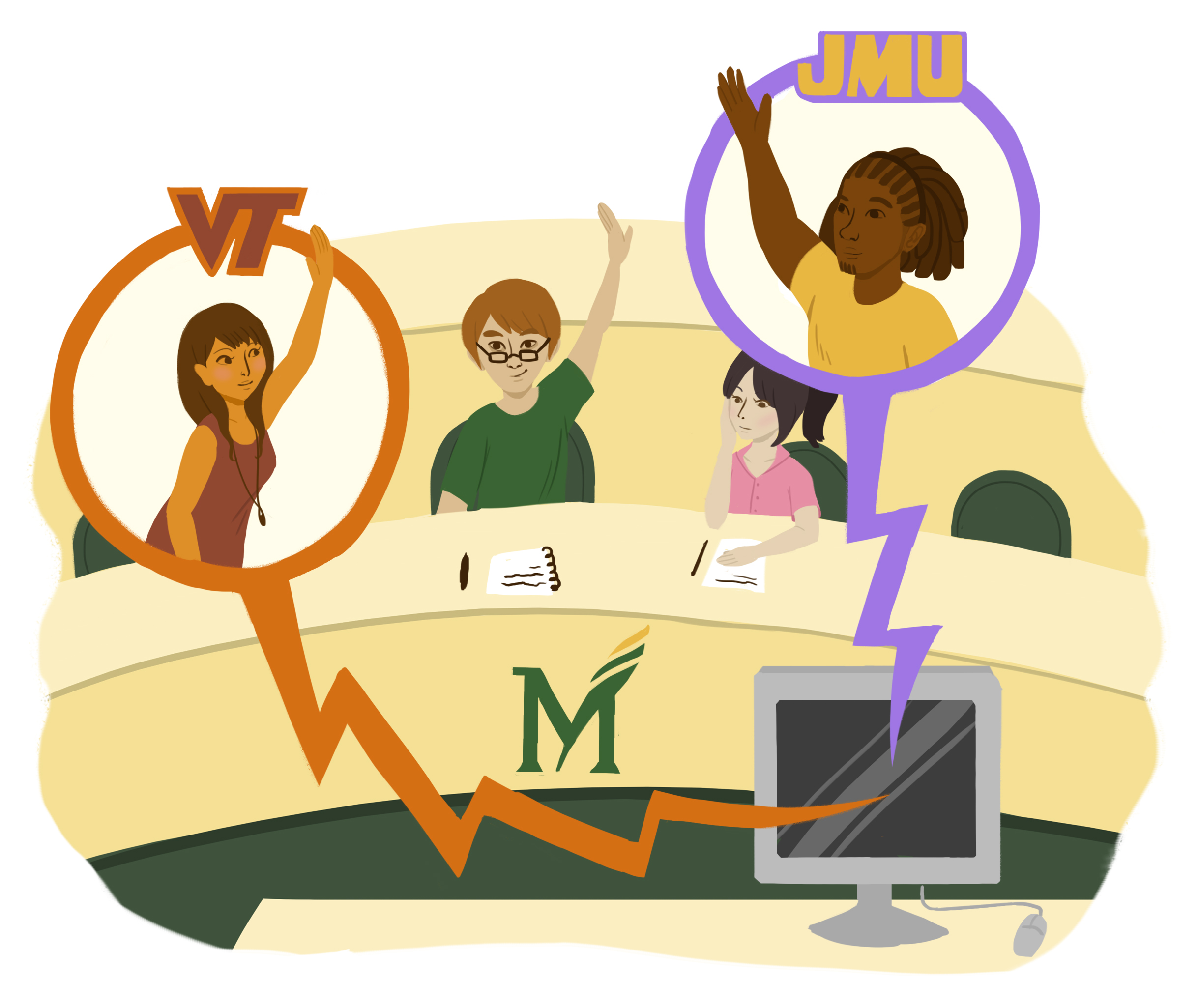 Mason is one of four universities that can now broadcast courses to other campuses with high-definition TelePresence screens that were installed in classrooms two years ago.

4-VA, a state-funded program that promotes collaboration and partnerships between member universities, started shared courses in 2012. The shared courses were started in order to use resources more efficiently, to increase the opportunities available to students and to encourage more interaction among participating institutions.

This fall semester, Mason is sharing a Chinese class with Virginia Tech and Korean classes with JMU. Past shared courses have focused on STEM subjects like biology and foreign language classes.

Mason has hosted 15 shared classes for a total of 265 students over the past two years, according to 4-VA’s Mason deputy campus coordinator Linda Sheridan. Over 500 students across the four universities have participated in the program overall.

“We wanted to provide a way that institutions could share courses that other institutions would not normally be able to take advantage of,” Sheridan said.

Mason professor Young A. Jung is teaching KORE 101: Introduction to the Korean Language to JMU students in addition to her Mason-only classes. Located on the third floor of Merten Hall, the room where she teaches her 101 class connects to other campuses through a flat screen system. Microphones embedded in the desks can communicate with linked campuses and are also equipped with mute buttons in case conversation needs to be confined to one room.

Since the fall of 2013, Jung has taught two courses each semester in this setting. Her classes vary in size from as few as six students to as many as 20, and she has taught televised classes to both JMU-only and combined JMU and Mason students.

Teachers undergo an orientation prior to teaching a shared course so they can adjust to a different teaching style and learn how to handle the technical equipment. 4-VA also provides participating faculty members with small stipends.

Janette Muir, the 4-VA Mason campus coordinator and Mason’s Associate Provost for Undergraduate Education, says the program is looking for incentives beyond the stipend to encourage professors to teach televised courses.

“The big benefits are, one, it increases goodwill between the institutions,” Muir said. “Secondly, it helps to make things run more efficiently…where a department chair can share a course that doesn’t have to be offered at the other school. So, it can reduce the cost, which is certainly an interest of the state.”

A number of factors go into determining which courses will be shared during any given semester. Professors who want to offer a shared course must demonstrate that there is interest in the class from more than one institution and that another university is willing to sponsor it. Faculty members who get assigned to a shared class can opt out if they do not want to teach in this different style and room. Scheduling considerations often come into play.

Dealing with these logistical demands can be a challenge, according to Muir.

“Each school has a different system,” Muir said. “We have a different grading system…and even the academic calendar is a little different, so it takes a lot of coordination.”

The technology can also be equally beneficial and problematic for students and teachers. Professors can connect their laptop to the TelePresence screen, allowing them to share files and websites with students and vice versa. A recording function lets teachers post lectures online for students to stream if they miss a class. Recently added printers made it easier to send electronic materials to other institutions.

Despite this reliance on technology, Jung emphasizes that televised classes are not the same as online ones. While students can attend online classes from anywhere if they have a computer and Internet access, televised classes resemble traditional classes but are held in an altered setting.

“The only difference is you are there, not here, not in a traditional classroom…but the classroom activities, the lesson style and classroom management is pretty much the same as traditional style,” Jung said.

Jung said that there are some notable changes from a traditional class format, though students tend to adjust quickly. Telepresence rooms have limited mobility since occupants generally need to remain seated in order to be seen and cannot physically interact with people in rooms that are being televised on the screen. This makes the classrooms ideal for discussion-based seminar courses but less viable for classes that need more student interaction.

Sheridan said 4-VA hopes to solve this limitation by expanding shared courses to HD conference rooms, which are like traditional classrooms and have a camera set-up that allows professors and students to move around more. These rooms can already be found around the Mason campus.

Other universities have expressed interest in joining 4-VA, meaning shared courses could spread to more campuses, though Muir can not yet announce which institutions might be added.

“Down the road, we may be working on greater collaboration around a shared degree of some sort or something like that,” Muir added. “Right now, we’re still sort of in the infancy stage of this whole process.”

So far, feedback from both teachers and students has been positive, according to Sheridan. Surveys conducted by her office have shown students like the TelePresence technology and do not feel it makes them disconnected from their professors. Because classes rarely exceed 20 students, they offer a more intimate environment than a standard lecture.

“Whenever I gave any kind of assignment or class activity, especially a group activity, they showed kind of a competitive atmosphere,” Sheridan said. “That helps a lot with students’ motivation.”