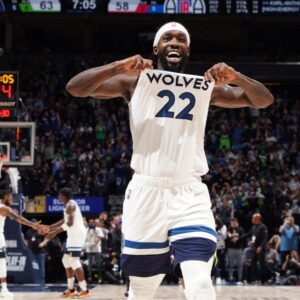 The NBA play-in tournament took a turn during the Minnesota Timberwolves and LA Clippers game on April 12 after the Timberwolves secured a win and a spot in the playoffs. Timberwolves guard Patrick Beverley, who is known for being reckless on the court, saw this as an opportunity to get revenge on the Clippers after he was disrespected by the same franchise in the past.

A primary goal for Beverley this season, which he emphasized during the press conference, was revenge.

As I suggested, Patrick Beverley is known for his recklessness on the basketball court. During the western conference finals in 2021, he shoved Chris Paul from behind after a timeout. Beverley was clearly heated considering this was the final round of the western conference finals. This wasn’t very sportsmanlike of Beverley and unfair for Chris Paul. I believe if Beverley was in a better state of mind and not too deep in his feeling during that game, the Clippers could have evened the odds and boosted the chances of winning.

“It’s deeper for me,” Beverley said. “I gave my blood, sweat, and tears for that organization. To just be written off like that, to be able to come here, play them in the play-in, beat they a**, no other feeling.”

He was later fined $30,000 for the harsh profanity he used during the rest of the postgame review. Nonetheless, Beverley still got his point across. He believed he deserved more as a player seeing how he made a difference for the Clippers franchise which was in the western conference finals last year. After wanting out, Minnesota was a “top three spot” of his choices.

He was essentially suggesting that, if he’s not getting paid, he’ll request a trade. Doing exactly that, he also beat the former team who threw him under the bus which was a plus.

I feel that Beverley displayed much perseverance at that point. In all honesty, it makes sense considering the contract he was offered was “borderline disrespectful,” as he stated.

Due to this, were his actions worth a 30k fine? Did he finally achieve the true goal he wanted? I think this was a fair accomplishment for Beverley, but I wonder how he will keep this momentum throughout the playoffs.

After the Clippers game, Beverley called out the players emphasizing how he proved all the doubters wrong and that the Clippers are “weak”. The fine obviously didn’t seem to be a big deal to him because he was striving to make a point. Also considering he arrived on ESPN in a Versace robe the day after the game should tell you how pleased he was with his success.

This is one of many things I enjoy about the NBA season this time of the year. The behavior displayed by these players shows us how serious the competition is and how much more problematic it can be for the teams.

Nonetheless, I have gained much more respect for Beverley. During an interview on ESPN, he emphasized that playing for the Timberwolves and making it to the playoffs was a way to represent the city of Minnesota as a symbol of what this city overcame.