On April 11, the results for the Spring 2022 Student Government Elections were revealed to the Mason student body. The winning ticket of Sophia Ngyuen and Celine Apenteng won 54.2 percent and received 936 of 1727 total votes cast.

The Nguyen-Apenteng ticket reacted to the news in a statement, “First of all, we are absolutely speechless. We really did not expect this high of a turnout, nor expect to win…we are truly, extremely, VERY excited to be Student Body President and Vice President and we wouldn’t have been able to win if it weren’t for the GMU STUDENTS!”

Ngyuen received the results and reacted with emotions of joy in an Instagram video.

Both losing tickets did not respond to requests for comment.

Twenty-three senators were also elected to office for the 43rd Student Senate. 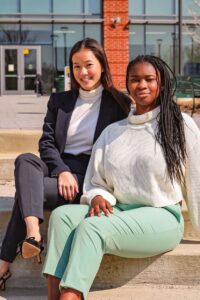 Nguyen and Apenteng will be sworn into the office of Student Body President and Vice President in the first meeting of the 43rd Student Senate, along with the senators. The meeting will be Thursday, April 28 at 4:30 p.m. in Merten Hall.