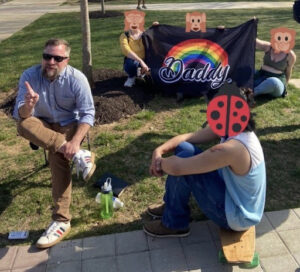 When will Mason protect the students over the strangers that flock to our campus?

On March 23, Mason’s campus was bustling. After a week off for Spring Break, everyone was back into the swing of things on a beautiful sunny day.

Only, on this day there was a familiar presence. A presence known well to the Mason student: the campus preacher.

As interchangeable as these figures tend to be, from pro-life groups to religious organizers, the unmistakable sound of pseudo-biblical zealotry never ceases to draw a crowd of distraught students.

While students of campus past have played the drums to drown out these persistent speakers, others organize demonstrations or attempt to debate them. But times have changed and so have the things these preachers are willing to say.

While preaching, the man was heard making light of sexual assault and making apologies for the holocaust in addition to other conspiratorial beliefs.

“It seemed like the more the crowd pressed him on the issue, the more he wanted to double down on the idea that Jews are not real. That was a huge talking point of his,” shared sophomore Government student Vincent Buonaspina.

Clearly, these views are more extreme than those that can be traditionally found in the speeches of campus preachers and, while he definitely piled onto these comments with the classics, many felt there was something different in the air when he spoke.

“He seemed to love the hate he was getting. He seemed to really like being humiliated in front of all of those college students. The more people were yelling at him, the stronger and more vitriolic he was getting,” Buonaspina added.

Shortly after the preacher made a comment about sexual assault being “universally good,” freshman Education student Stella Cruz had had enough.

In an infamous video posted to @barstoolgmu on Instagram, Cruz can be seen tossing a cup of coffee onto the preacher before flipping him off. While there was a lot going on in this clip, the audio was quite selectively removed from the post, leaving most who viewed it unaware of any context leading up to it.

“I had never seen anything like this in person,” Cruz shared. “I [usually] feel like my rights are being advocated as a Latino woman and as a woman within the LGBTQ community on this campus. So, it was very startling.”

In the aftermath of the incident, Cruz is seen being escorted away by a campus police officer before she was slapped with an assault charge.

While much of the campus shares her discontent, there were clearly a small handful of students who piled onto her arrest.

“When I got arrested, I was sitting next to the officer and this guy comes up to us and said ‘thank you for arresting this hooligan,” Cruz remembered. “So, the police were right there and, before I threw that coffee, they were just chit-chatting and letting this dude do his thing.”

In the days following, Cruz became widely known as “Coffee Girl” in a series of posts seen on Instagram, Twitter and Yik Yak which opened the floodgates for campus debate regarding the ethics of her choice.

Of course, this ties into a much larger debate about free speech on campus. After all, Mason is a public university, which implies that community speakers share an equal right to the land as the students.

“It’s just a very vague issue because it’s very hard to control speech, especially on a campus that prides itself on being the perfect free speech academy,” Buonaspina added.

And, while the school can use the first amendment to back this up, incidents such as this lead many students to feel the school is unnecessarily allowing for excessive hate speech.

“Mason isn’t directly enabling it, but they’re letting it happen. And if it’s been continuously happening over the course of the last couple years, when will they put a stop to it? Now, it was coffee. If someone gets vigorously assaulted on campus and Mason has to respond, that is the only time that I feel they would cut it off,” said Cruz.

It seems that while there are a considerable share of students who disagree with this preacher, Mason is hell-bent on maintaining their image in a community as politically diverse as the Washington region.

But who is Mason really doing this for?

It seems like most Mason students tend to hold liberal-leaning views on social issues and the school very frequently composes itself as a beacon of diversity to incoming students.

In the words of Cruz, “I just think it’s hypocritical of Mason to support the LGBTQ community, to support people of color, to support everyone and then let these people come on campus and not do anything about it. It just doesn’t go with their core ideals, so where’s the line?”

Many students speculate that the preacher was hoping for something like this to happen. After all, the pending assault charge would only serve to line his pockets in the end.

“I almost feel like my core defense of coffee girl is the fact that, if the university isn’t gonna do anything to protect students, why shouldn’t we do anything? We all live here, this is our home. We shouldn’t be confronted with hate speech where we live,” expressed Buonaspina.

Recently, Cruz reached out to the Mason administration with a request to set up a meeting with her attorney. In response, Mason expressed that they could conduct a meeting, but would not be willing to provide any monetary support for Cruz.

In the days following, she set up a Spotfund page, which can be found here and any contributions are encouraged.