Carefully unwrapping the package which holds my new Adele ‘30’ vinyl, I place the new vinyl on my record player, where it stays for the remainder of the afternoon. Adele’s voice casts through my apartment halls at high volume, bringing a feeling of deep comfort.

Adele’s new ‘30’ album is more than music; it’s an emotion that is meant to provoke the soul. The album has a variety of acoustics that cover just about every mood. It is an album on life, and musically illustrates all the emotions that go with it: sadness, joy, happiness, fear, and anger.

Adele starts off her first song for her album with a kind and hopeful tone, then goes on to use that tone to paint a picture of her lifestyle throughout the album.

The album is real, it’s Adele. Her lyrics speak on real-life problems that can be relatable to her listeners. In “My Little Love” she sings, “But I just feel really lonely / I feel a bit frightened that I might feel like this a lot.”

Her lofty metaphors for heartbreak and triumph come across as poetic, and the complexity of her emotion ranges over the course of each song, taking her listener on a lyrical journey.

I believe it’s her best album by far, and it’s gained a great deal of traction among fellow artists and on social media platforms like Tik Tok, where the hashtag #newadele has gained over 2 million views.

This album has been revolutionary in the way Adele approaches her music with such ferocity. What stands out about this album is the lyrical versatility. Adele’s album encompasses the genres pop, classical, jazz, and chill, a diversity of sound that her previous albums – which mostly focused on jazz – lacked.

Overall, she creates a very organic sound, comparable to the natural styles of  Marvin Gaye and Donny Hathway, especially when compared to her former albums which can feel very structured.

Many of Adele’s songs on the album contain themes of divorce or separation, after Adele and her ex-husband Simon Konecki were separated after being together for just 1 year. This album is not centered around divorce but was inspired by a lot of the emotions that can come from it.

“Mummy’s been having a lot of big feelings lately,” she told him in what was, presumably, a voice memo captured on her phone. “I feel a bit confused and I feel like I don’t really know what I’m doing.”

I felt that the addition of these audio conversations made the piece more vulnerable and personal. It removed the title of “celebrity artist” from Adele at that moment and replaced it with the title “human being.”

Adele left nothing unsaid. She used the album as a way to find healing through her creation of music. Adele’s new album is like her own personal diary because she is so vulnerable and upfront with her experiences through the lyrics.

Adele’s ‘30’ album lyrically displays raw emotions and looks to connect with her listeners in a more personal way. I feel this album is some of Adele’s best work and reiterates the fact that she is a human being and not just a celebrity. 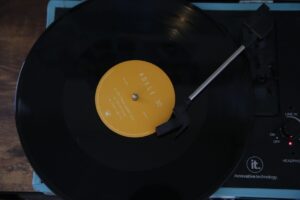 MASON STANDS IN SOLIDARITY WITH UKRAINE