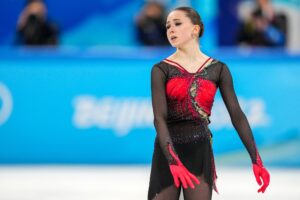 Following the rules is simple. Athletes have to do it all the time in order to compete. Though when some individuals cheat, there are consequences. Yet, in the 2022 Olympic figure skating competition, this has not been the case.

Russian Olympic Committee (ROC) skater Kamila Valieva, brought home the gold for her country in a team event a few weeks ago. Here, the 15-year-old skater became the first woman to land a Quad jump at the Olympics.

In December, Valieva tested positive for the drug, Trimetazidine, which is a heart medication that enhances endurance. An Olympic official told Reuters that “[Valieva’s] positive drug test was caused by a mix-up with her grandfather’s heart medication.” It was discovered that Valieva’s sample included 3 substances that are used to help the heart.

On the other hand, this does show problems within Valieva’s coaching and parental figures. It is unknown whether this was encouraged or not.

As Valieva is still a minor, how she gained access to these drugs, who allowed this to happen, as well as if others knew about it, is still unknown. Personally, I feel empathy for Valieva given the fact that she is so young while going through this, but I don’t think she should have been allowed to compete.

This situation definitely tainted her name, as well as the experiences of the other skaters.

It could even be said it has ruined the reputation of the Olympics as an organization, as it is knowingly allowing someone to compete when they broke the rules.

In a statement, the International Olympic Committee (IOC) said, “Should Ms Valieva finish amongst the top three competitors in the Women’s Single Skating competition, no flower ceremony and no medal ceremony will take place during the Olympic Winter Games Beijing 2022.”

The Olympics did not hold a medal ceremony for the team figure skating event that Valieva helped win.

She was a favorite to win gold in the Women’s Singles Figure Skating competition, but the IOC was not going to hold a medal ceremony again if Valieva placed on the podium due to the ongoing investigation into the test results.

It’s not sending the right message to the figure skating community and the other athletes at the Olympics in general. Allowing someone to compete despite not following the rules and making an exception for one individual is not fair to the majority.

In the morning the  Women’s short program began, Valieva placed first at the end of the event. As her chance for gold was increasing, backlash followed and Valieva fell multiple times during her final free skate on Thursday. This led her to fourth place and kept her off the podium.

The pressure must have gotten to Valieva. Multiple well-known figure skaters and Olympic athletes expressed their disappointment and anger towards the decision to even let her skate.

Valieva’s fellow Russian teammates, coached by the same individual, actually won gold and silver, but it sparked a dramatic scene as there were many tears shed by Valieva after her free skate.

FALL FOR THE BOOK PRESENTS WALLS BY L.M. ELLIOTT