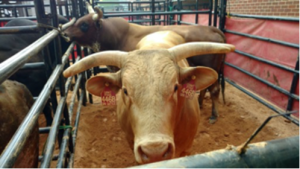 This is the second time Mason has hosted PBR. In 2019, students also protested their Unleash the Beast event, an event similar to PBR.

Vegan activist and former student Asteria Lysippe, organizer of the upcoming protests, is encouraging students to sign an online petition, join the protests and contact President Gregory Washington to persuade the university to cut ties with PBR and its event, which she believes is inherently cruel and unethical.

“Mason is fully capable of having different events there,” said Lysippe, citing financial gain as the main reason behind Mason’s affiliation with PBR. “They don’t need to allow [this] on our campus for any reason,” she states.

Lysippe claims her research and first-hand observations of the event reveal a lack of humane conditions and treatment of the cattle in PBR’s care, from the use of electric cattle prods to hours in direct sun with no water.

Justin Cornwell, a promoter and stock contractor with PBR, denied these claims in 2018, stating electric prods are not permitted at PBR events and that the bulls receive high-quality care.

“It’s important to me that they are as comfortable as they can be,” Cornwell said in an article published by the Fairfax County Times.

In addition to the protestors’ concerns about animal cruelty, some have highlighted the high rate of injury for human participants. Specifically, protestors cite the recent death of Amadeu Campos Silva as yet another reason Mason should ban bull riding from their affiliated venues.

Lysippe says her on-campus outreach efforts showed most students were extremely supportive of ending Mason’s affiliation with PBR, but many were unaware the university hosted the event.

According to Alissa Karton, assistant to the vice president and director of Special Projects, just 1% of the approximately 8,000 attendees of the 2019 event were associated with Mason.

“Students and staff and local activists are not happy about this cruelty being allowed on this campus,” said Lysippe. “A place we want to be shouldn’t be doing things we’re very much against.”

WHY EVERYONE SHOULD BE WATCHING GLENN YOUNGKIN