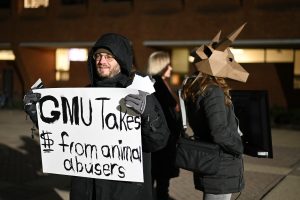 The Vegan Society at GMU hosted a student protest for “inaction against the bull riding industry” from 5:30-8:30 p.m. on Thursday, Jan. 30. The Vegan Society at GMU seeks to “educate students about veganism and vegan options on campus” as well as advocate for “animal rights and actively strives to reduce animal suffering on campus in all aspects.”

The protest took place outside of the Johnson Center in Wilkins Plaza. The demonstration was comprised of under 10 activists who were disgruntled with Mason’s decision to host a Professional Bull Riding (PBR) event at EagleBank Arena.

The two-day PBR event took place between Sept. 21-22 of last year. Demonstrators held paper signs, as well as TV screens depicting bulls with their horns sanded down and cowboys holding electric shock rods. According to one activist, Mason has denied that shock rods were used at the event. The Vegan Society at GMU asserts that this, along with the act of bull riding, is cruel and unwelcome on Mason’s campus.

Vegan Society at GMU member Rachael Nicoletta made a point that such activities are not seen at institutions such as Harvard and Yale.

Nicoletta voiced her concern that the bulls were allegedly kept in cramped cages all day while left in the sun, and were transported in such cages for long periods of time to make it to these events.

“The bulls look really sad,” Nicoletta said in reference to pictures of the bulls on the TV screens.

Demonstrators stood in a circle with their mouths taped shut protesting Mason’s inaction regarding the prohibition of such activities on campus. The Vegan Society at GMU takes issue with “pre-provoking” of what Nicoletta says are “gentle animals” in noisy arenas.

Most students walked by the demonstration without question. Some stopped to observe the pictures being presented on the TV screens held by the protesters.