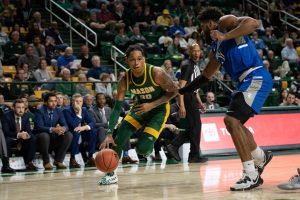 After their victory against St. Joe’s in the Atlantic-10 tournament and the cancellation of their second round game due to COVID-19, men’s basketball is looking to rebound in the 2020-2021 season.

This year the Patriots were picked to finish 10th in the A-10 preseason coaches’ poll, their worst ranking since 2017. This could be attributed to star Justin Kier’s transfer to Georgia after the 2019-2020 season.

Mason was stricken with injuries last season, with Kier in and out of the lineup. Junior Jamal Hartwell, who played well for the Patriots, was sick for the most of the second half of the season and Ian Boyd missed an entire year with a wrist injury but is finally back for his fifth year.

He continued, “This is a phenomenal freshman class — great kids, great work ethic … Tyler Kolek has distinguished himself. [He’s] played great, and he is a phenomenal shooter from long range, which is something that our team needs … Ronald Polite has shown flashes of great vision as a guard.”

Paulsen also added, “Malik Henry will make people forget about AJ Wilson down the road. He is going to be a more prolific shot blocker than AJ Wilson. Otis Frazier is a very versatile guy who could play multiple positions. So I love them all collectively, and each are going to add to different [elements].”

Paulsen is also looking forward to the new season, but doesn’t want to get caught up in expectations. “I think the thing with goals is that you don’t want to be limited by goals. So if I said that [our goal is] being in the top four of the A-10, that would limit us,” he said. “But I think that’s something where we want to shoot for, I think we want to be an NCAA tournament team. I think that’s a legitimate goal — but [it] is going to be extremely challenging because this league is so good.”

The Patriots also had a difficult time scheduling non-conference games during the COVID-19 pandemic. “It was a crazy couple of weeks,” Paulsen said.

When the start date for NCAA basketball was pushed back, that in itself had already invalidated every single contract for games preceding that date. Paulsen’s plan to build a new schedule was to limit travel by only taking buses and playing within an hour and a half radius of Fairfax.

Mason reached out to VCU’s head coach Mike Roades and “In three minutes, we had two non-conference games scheduled,” Paulsen said. Mason will take on James Madison and Old Dominion in Richmond on Dec. 12 and 13, respectively.

Paulsen was uncertain of the season ahead, saying, “A lot of us know we don’t know anything. There are no certainties. But if you’re vigilant in your safeguards and your protocols, you give yourselves a chance … This is not the way that anyone dreamed of going to college. But our guys have been great at it.”

Mason gets set for their home opener on Nov. 26 against an unknown opponent in the DC Paradise Jam.

FALL FOR THE BOOK