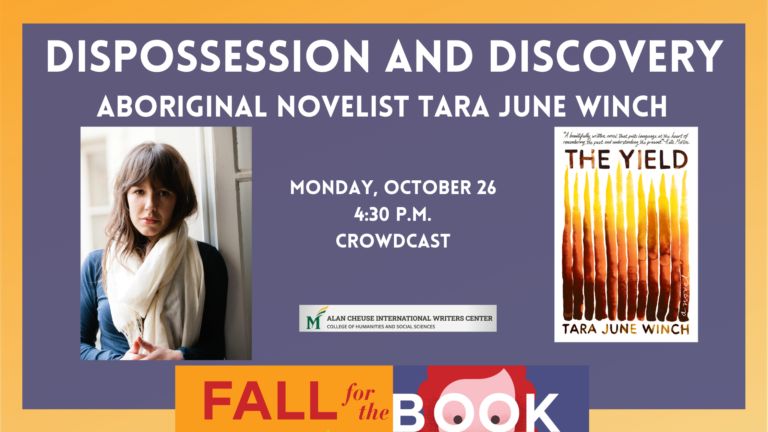 Tara June Winch, author of “The Yield,” in conversation with writer Jacki Lyden

On Monday, Oct. 26, the Fall for the Book Festival hosted a virtual Q&A session with Australian  novelist Tara June Winch and American author Jacki Lyden on topics of dispossession and discovery — common themes in Winch’s novel “The Yield.”

“I have to say I was swept away by Tara’s story in ‘The Yield,’” said Lyden. “It’s 200-plus years of history. It’s a piece of language and it’s a piece of history. It is just not a regular book that anyone would look at. It is a special kind of literature that has extraordinary range.”

“The Yield” tells the story of August, a young woman who is traveling back to her family home on Massacre Plains following the death of her grandfather, Albert Goondiwindi. After witnessing attempts to displace the culture she grew up from her homeland, August reconnects with the aboriginal culture of Australia and tries to make amends by saving their land to revive the lost identity within their culture and language.

The language of the novel centers around the aboriginal language Wiradjuri.

“When it came to Indigenous language, I saw it as healing and came as an outsider to it,” said Winch. “I looked at language almost as a ruin in a sense. I wanted to make the language in my book become a space where — almost like one where you would look at the Roman Colosseum, for example, and see it as a ruin.”

Winch was introduced to Wiradjuri by a friend and presented it to her father as a gift to heal some wounds within their family. In “The Yield,” the Wiradjuri language is described as a language that brings movement and space “between things.”

While writing the book, Winch became immersed in citations, footnotes and glossaries. She wanted her book to dance close to nonfiction, something she was always attracted to in a book.

During the event, Winch recited pieces of the passage that centered around the main character in her story and showed the essence of her message about the aborignal culture that she grew up in.

“The characters in this story are sort of meeting around shared memory,” Lyden noted. “It’s like a fairy tale kind of element that helps drive the issue of Indigenous people being removed from their land, just like how it was mentioned in the story when the characters were removed hundreds of years ago.”

The different elements between the three main characters displayed Winch’s knowledge of colonization’s impact on the aborignal population in Australia.

“After years and years, I realized that I should ‘contain this world.’ That was a metaphor I brought to myself for this culture because it is an entire world itself inside the world of Australia,” she said. “That kind of led me to the question I asked myself: Who do I need to see in this story in order to tell the story of all time, to go all the way back into the colonial existence to tell the story and bring the reader along to stay with the story?”

Winch’s first novel, “Swallow the Air,” was published to much acclaim in 2008. At the time she had been working with Nobel Peace Prize winner Wole Soyinka as part of the Rolex Mentor & Protege Arts mission. In 2018, Winch wrote a script for the Australian Indigenous dance documentary “Carribarrie,” which gained a lot of attention and awareness of the aboriginal population in Australia.

TIPS FOR ON-CAMPUS LIVING DURING A PANDEMIC