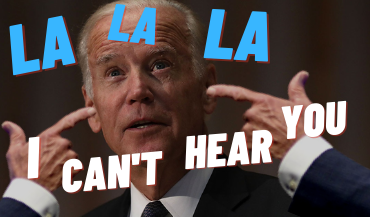 People who closely follow politics have been upset recently at Joe Biden’s refusal to answer questions. He has been calling “lids,” the journalistic term for ending a campaign day early, quite often — sometimes before 10 in the morning.

Biden has also refused to take a stand on court packing, which is the practice of expanding the Supreme Court (beyond nine justices) and filling the new seats with sympathetic jurists. On Oct. 8, Biden said he would take a position on court packing “when the election is over.”

Biden’s explanation to the press for not answering the question about the courts on Oct. 8 was, “The moment I answer that question, the headline in every one of your papers will be about that.” He is, of course, correct. If he promises to expand the court, he would be promising to change something that has been constant since 1869. That’s newsy. If he promises not to expand the court, he would be driving a wedge in his own base, since some progressive activists and even some elected officials support the idea. That’s newsy too.

If Barack Obama’s foreign policy strategy was “don’t do stupid stuff,” his vice president’s campaign strategy is “don’t do newsy stuff.” Like it or not, “don’t do newsy stuff” has served Biden well so far. It won him the primaries, and he’s never trailed — or even been close to trailing — in the RealClearPolitics national polling average at any point during the general election campaign. He has also consistently outperformed Hillary Clinton’s 2016 polling average since early August.

People who are upset that he won’t answer questions are forgetting some important facts. Biden does not hold elected office. He does not serve the people of the United States. He is an ordinary private citizen (despite retaining the honorific “Vice President,” which is a grotesque, quasi-aristocratic tradition that we should dispense of, but that’s a topic for another article). He is under no obligation to talk to the press if he does not want to. Joe Biden doesn’t have to answer your questions.

The vast majority of them don’t have the faintest idea what “calling a lid” means and haven’t given a second’s thought to court packing. According to Krupnikov and Ryan, Democrats who don’t follow politics closely are much more likely to consider moral decline as an important issue than Democrats who do follow politics closely. That might be why Biden is running ads that say things like “vote for empathy” and “vote for respect” instead of “vote for a 38-point energy plan that will create a million new jobs, reduce carbon emissions by 5 percent, and be revenue-neutral over the 10-year budget window.”

Joe Biden’s job is not to conform to some ideal presidential campaign that political junkies have invented. His job is not to give detailed positions on every issue that matters to policy nerds. His job is to get more votes in the Electoral College than Donald Trump. He seems to think he can do that by running feel-good ads that don’t even mention Trump, posting about ice cream on social media and not doing newsy stuff. We’ll have to wait until all the votes are counted to know if it worked — but it seems to be going pretty well so far.