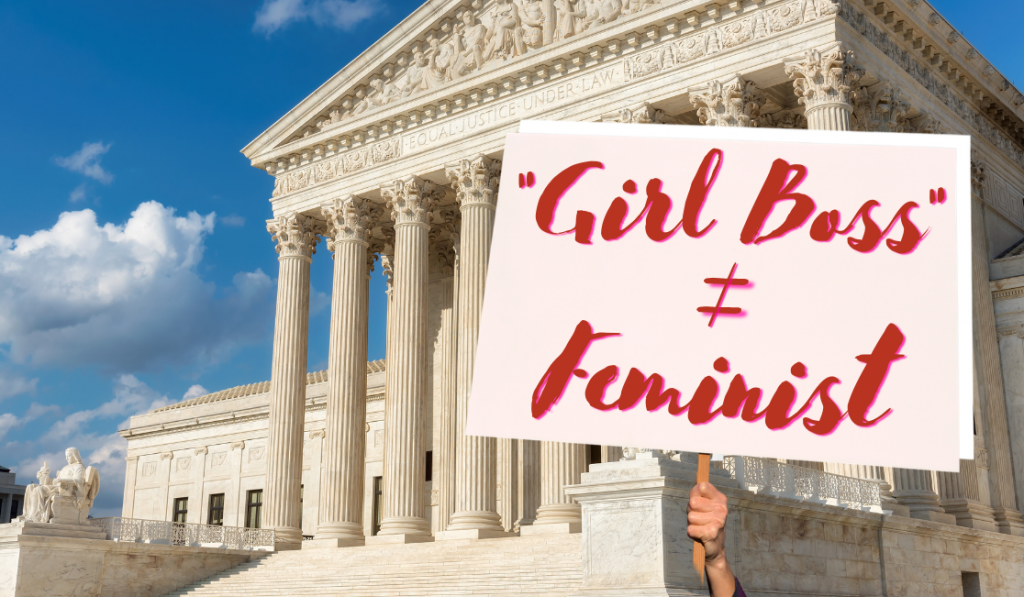 But wait, she’s a woman, right? This is great for feminism! As Joel Kim Booster sarcastically said on an episode of NPR’s “Wait Wait… Don’t Tell Me,” “I’m just excited that if someone’s going to take my rights away, they’re an absolute GIRL BOSS. Slay, yes!”

There is no doubt that Barrett is talented, successful and intelligent. And we have to acknowledge that 50 years ago, she wouldn’t be able to be where she is right now. But we also have to diverge from the idea that breaking the glass ceiling is a feminist success on its own.

No woman is perfect in her fight for equality, but women who use their power to harm other women by reducing their rights and freedoms are outright anti-feminist. And when those women hold political power, they pose a direct risk to feminism — in a patriarchal society, women can still oppress other women.

Following the announcement of Barrett’s nomination, many right-wing pundits were quick to defend Barrett on feminist grounds, arguing that Barrett represents a modern “conservative feminism.” In a New York Times opinion piece, columnist Ross Douthat said that we need “conservative feminism” because “feminism’s victories were somewhat unbalanced” in favor of professional women and have negatively impacted sex, romance, marriage and child rearing.

But the phrase “conservative feminism” is an oxymoron and an unnecessary division to make. Unlike what Douthat and other conservatives seem to think, feminism is pro-motherhood and pro-work-life balance. Feminists do prioritize the women and men that want to have a family, even those who would prefer to stay home and not work. They fight for paid family leave, protection for pregnant women, social services like welfare, maternal healthcare and much more. Before joining the Supreme Court, Ginsburg helped make sure widowers had access to their wives’ social security benefits so they could care for their families.

Feminism’s support of abortion and accessible birth control options is also about more than just giving women the chance to choose whether they are ready to have a child; it’s about protecting women’s financial security, health and safety, and access to education and employment opportunities. Feminists recognize that not all women feel that caring for children is, as conservative writer Erika Bachiochi put it, a “cultural priority.”

As a law professor at Notre Dame, Barrett was a member of Faculty for Life, an anti-abortion group. According to a 2013 Notre Dame Magazine article, she also believes life begins at conception. During her time on the appeals court, Barrett has veered away from broad interpretations of abortion rights, and has followed precedents set by the Supreme Court.

However, that doesn’t mean that abortion rights are secure. Overturning a Supreme Court precedent like Roe v. Wade would be undoubtedly difficult, but if Barrett were confirmed, conservatives would likely have the votes to do it. Until that time comes, the court could consider cases that would chip away at abortion rights. Barrett, who is only 48, could have decades on the court and many chances to rule in abortion-related cases.

With Barrett on the court, abortion isn’t the only thing to be worried about . Feminism is intrinsically intertwined with many other issues that Barrett has criticized including LGBTQ+ rights and immigration. Women whose identities exist at these intersections found hope in Ginsburg, but will likely get left behind with Barrett added to the court.

Representation matters, but what makes a greater difference is positive representation. Women, particularly those who exist at the intersection of other identities, are often forced to accept imperfect representation because “it’s better than nothing.” But that isn’t good enough.

Filling the vacancy with Barrett is simply a conservative ploy masked as feminist representation and is a disgrace to Ginsburg’s legacy. Barrett may be a champion for conservatives, but a female Supreme Court justice doesn’t mean an automatic champion for all women.

For an alternative perspective on Barrett’s nomination, see opinion editor Dominic Pino’s piece, “The Barrett nomination should teach the left the limits of identity politics,” here.