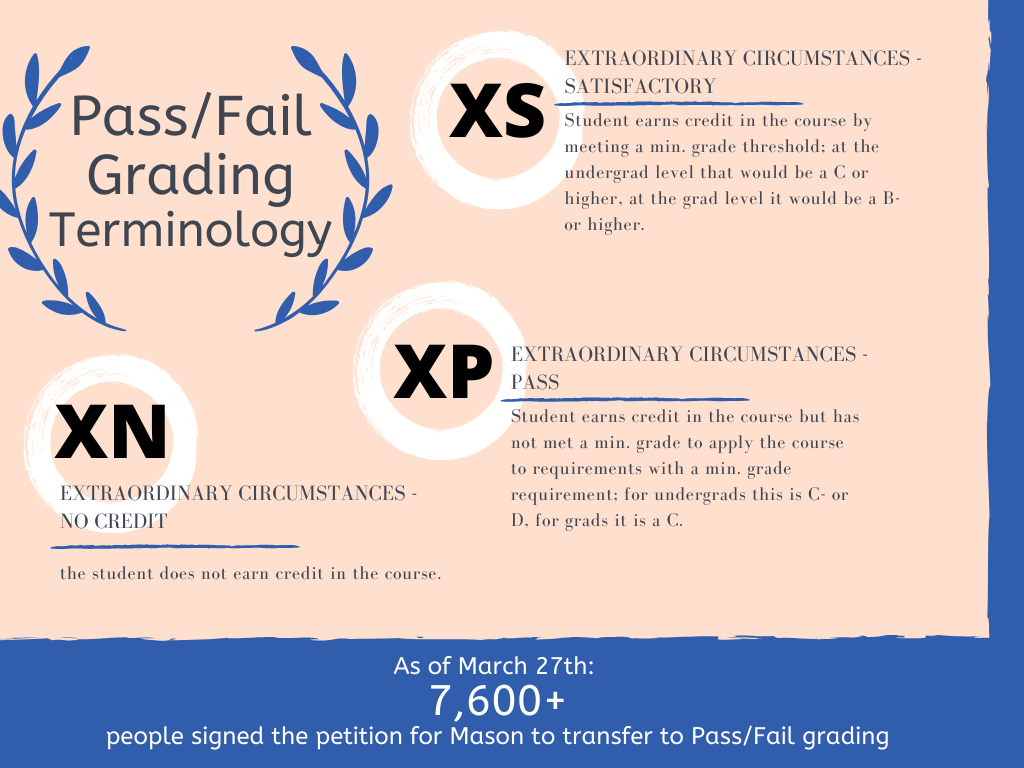 Due to the change to online classes for the remainder of the semester, the faculty senate voted on a pass/fail grading system opt-in for students

After review and discussion by the faculty senate, Provost David Wu and faculty senate chair Shannon Davis sent an email to all students on March 25, which stated that students will have the opportunity to choose between a credit or non-credit opt-in for the remainder of the spring semester.

Each student can decide on an individual and course-by-course basis which classes they want to receive a letter grade for and an alternative grade for.

“Our goal was to find a way to be responsive to the current global health crisis and its effects on our students while maintaining the academic mission of the university,” Davis explained in an email to Fourth Estate. “We wanted to ensure that this crisis did not not unfairly penalize students in their academic progress. We moved quickly to call a meeting and vote on implementing a policy change and did so on Tuesday.”

“The rationale is to provide maximum flexibility for the students at this challenging time,” Wu said in an email.

As of now, this applies to undergraduate students. Those in the graduate and law school programs — and even undergraduates “enrolled in cohort sections of special programs” — will follow the decisions made by their respective schools.

“In my opinion, I think our school did right in adopting the pass/fail petition because with the coronavirus, many students have been going through a hard time with sudden shifts in lifestyle,” junior communication major Elisar Alassaf said. “It is only right that the administration accounts for our mental health when taking decisions regarding the remainder of our college career. I believe that this decision will alleviate some of the stress the students might be under during this time and improve their overall mental well-being.”

The idea to start a pass/fail grading system for the semester came to fruition prior to the student petition for a pass/fail opt-in started at Mason. As of March 27, the petition had over 7,600 signatures.

“The Provost’s Office and Faculty Senate began talking about changing the grading policy last week prior to the petition coming to our attention,” Davis wrote in an email.

Sophomore philosophy and government international political major Hossein Khoshhal started a petition for Mason students to sign after students from other universities, such as William and Mary, and Georgetown, started petitions to implement the pass/fail classes in their universities.

According to Khoshhal, the purpose of the petition was to publicly announce and explain the proposed solution of pass/fail classes to the Mason community and encourage them to see it in light of structural changes going around in coursework.

“When I initially posted the petition, I was doubtful that the university would consider it an official appeal for a change in the grading system,” Khoshhal said. “Regardless of that, I knew that it still serves as a necessary first step in getting the students to be actively involved in the decisions being made about their future.”

Khosshal said that he was aware the shift to virtual learning would present many obstacles unique to each student.

“Because of the unpredictability of everyone’s situation, going forward with the same academic expectations as though it is not being affected by the current epidemic would be an act of negligence towards the students,” Khosshal said.

According to Khosshal, the petition served as a way for students to decide whether they feel their final grade would be an accurate representation of their performance in the class.

“The opt-in pass/fail proposal is one that does not harm anyone’s academic progress, and it is why the petition was so well received by the students,” Khosshal said.

In addition to the credit and non-credit opt in option, students also are given an extension of incomplete grades. According to the email sent by Wu and Davis, the previous deadline for completing work for the spring semester was Oct. 23, 2020.

The deadline for completing work related to an incomplete grade received in spring 2020 has now been extended to the end of the fall 2020 semester.

Students Give Coronavirus a 10/10